This content was published: August 2, 2021. Phone numbers, email addresses, and other information may have changed. 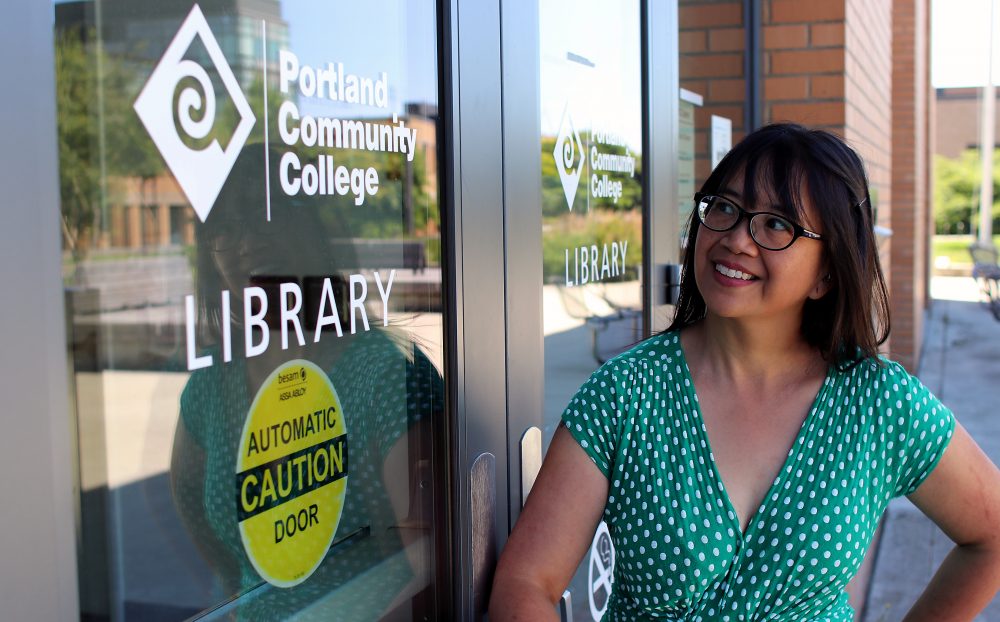 Vichit-Vadakan used her background as a reference librarian at the Cascade Campus to her advantage.

Veronica Vichit-Vadakan’s skills as a reference librarian at Portland Community College have transcended the school to the world of television and beyond.

In January of 2020, Vichit-Vadakan used those talents to compete on the popular game show Jeopardy!, winning on four of the five episodes in which she competed, coming away with more than $90,000 in prize money. This was enough to qualify her for the show’s Tournament of Champions in May of 2021 where, after two weeks of games against other top-ranked winners, she earned a spot in the finals and won another $50,000.

“It’s the ideal job for getting on Jeopardy! and doing well,” Vichit-Vadakan said. “I would watch it every night growing up. It was the perfect show for a nerdy kid who likes game shows.”

Over the years, she discovered that her love of trivia and her job as a librarian formed a sort of virtuous circle. Before PCC, Vichit-Vadakan worked as a librarian at the Oregon College of Oriental Medicine, a small graduate school of acupuncture and Chinese medicine, and also at the library at Washington State University campus in Vancouver, Wash. In between, she served as theater staff and archivist for the Northwest Film Center. 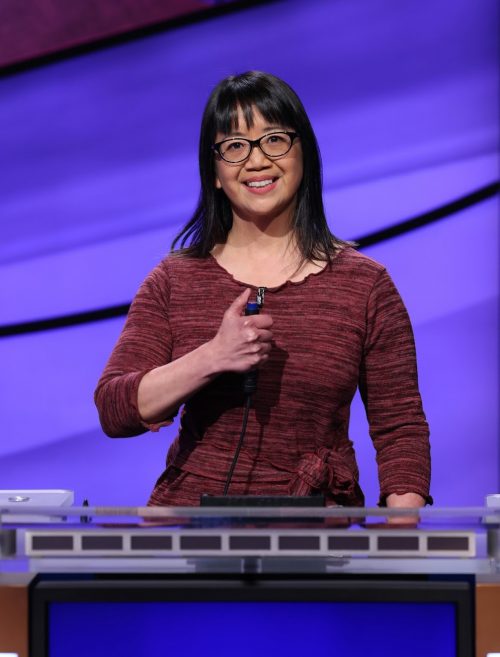 She has been a fan of the game show since she was a kid.

“You never know what random question people will ask you,” said Vichit-Vadakan, who earned a bachelor’s degree in History from Reed College and a master’s in Library and Information Science from the University of Washington. “Students are struggling across all different disciplines to find the information they need, and it can be really helpful as a librarian to have a lot of facts at hand to help them out.”

Vichit-Vadakan almost never got to PCC. She had been looking for full-time reference librarian work before the COVID-19 pandemic started and applied for the PCC position back in December of 2019.

“I wound up having my second interview with PCC – in-person and on-campus – just a few days before all the campuses closed due to the pandemic,” she said. “It was lucky I did or else wouldn’t have gotten to go inside the library at all before I started working.”

The road to Jeopardy! was a bit of happenstance. A couple of years ago, a friend took the online Jeopardy! test to appear on the show, and encouraged her to do the same. Vichit-Vadakan took the test, and was called in for an audition. She impressed and returned to compete on the show, winning enough episodes to qualify for the Tournament of Champions.

Her stint competing on the show came during a time of great uncertainty for Jeopardy! The show’s iconic host, Alex Trebek, had recently passed away after a long illness, and it was unclear whether the tournament would go forward as planned, but eventually proceeded.

The format featured five games of three players each in the tournament’s quarterfinal round, with the five winners advancing to the semifinals, along with the next four highest-scoring players. Vichit-Vadakan was among the four runners-up — “I got a wild-card spot,” she explained.

She entered the semifinals — three games of three players each — as an underdog with nothing to lose. But, thanks perhaps to her training and experience as a reference librarian, she won her semifinal game, made it to the final and finished third.

“All things considered, I’m very happy,” she said. “I always say that the best preparation for doing well in trivia is to have an open and curious mind and just be interested and engaged in the world around you. I love travel, cooking, camping, gardening, films, music, languages, art, and, of course, books – all of which have come up in trivia questions in one way or another. I love to expose myself to new information and situations not because I’m trying to be better at trivia questions, but just because it’s my personality to seek and learn.” 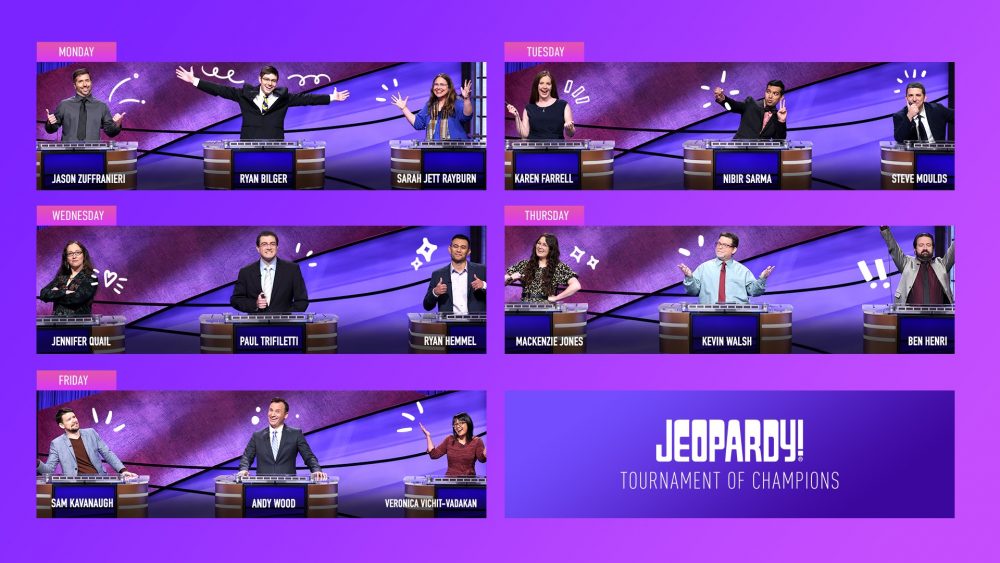 You are awesome Veronica!

Veronica, this is absolutely FANTASTIC! 1,000,000 congratulations!

x by Heidi Sickert 1 year ago

Veronica, Congratulations on your wins! Thanks for sharing this uplifting story and SO happy for you!

x by Jennifer 1 year ago

Veronica it was so fun to watch you on the show. You did such an amazing job!! Way to represent PCC!

You did wonderfully, I watched the episodes!

x by Sylvia Gray 1 year ago

Veronica – We watched some of your episodes and were totally impressed! Good on you!

x by Zita Podany 1 year ago

Yay, Veronica!
I watched you play and cheered each time you won. Great for PCC and Cascade Campus!

x by Reimi 1 year ago

Hey! I remember watching you play and you were great!! Congrats Veronica!!

x by Robert Gabris 1 year ago

Veronica, I watched some of your episodes and you did wonderful. I didn’t know you worked at PCC until after the tournament. You were always introduced as “a librarian from Portland, Oregon.”

x by Xochitl 1 year ago

Wow! this is a great story. Librarians were my go to when I needed help with ideas on finding my research articles for WR121/122 classes. Amazing people! Is so nice to see Veronica representing our school/state. Congrats!

x by Esther Loanzon 1 year ago

You’re genius! I watched all our episodes until the end. You almost got the big win!

Congrats and welcome to PCC!

x by Heather 1 year ago

What an awesome story. So glad you had that opportunity and that the timing worked out for you at PCC. Librarians are so helpful! You rock!

x by Usha Ramanujam 1 year ago

x by Ammura 1 year ago

Proud to work with you!

x by Julianne Johnson 1 year ago

You are a true example of what you can achieve if you put your mind to it. Being prepared means you can take advantage of opportunities as they present themselves.
I am completely thrilled for you. Congratulations!

x by Jane Zunkel 1 year ago

Congratulations, Veronica! I know that spring Writing 115 students were also cheering you on!

x by Veronica Vichit-Vadakan 1 year ago

Thanks everyone! It was a really fun experience and I recommend going on Jeopardy! to everyone!

x by Jolie Donohue 1 year ago

Woot! Woot! This is awesome Veronica!!

x by Khendra Forrester 1 year ago

x by Madison Beal 1 year ago

Congratulations!! This is such an amazing accomplishment!

x by Stedman Bailey 1 year ago

It was so fun watching you on your run back in January 2020, and even more fun watching the run on the TOC. AND it literally could not have happened to a nicer person! I am so in awe of all of the work you do for the OHS, for the NWFC, and of course for our students at PCC! You are the epitome of a champion <3

x by Joan 1 year ago

We enjoyed watching you and were so impressed by your knowledge and poise. It was very fun to read your story. Thanks for sharing.

x by Jaime Lim 1 year ago

Congratulations Veronica. We watched you. You were very good. Thank you for representing PCC very well. I’m very proud to proclaim that I’m a former PCC board member.

x by David Woodard 12 months ago

Congratulation’s on your wins!! It just goes to show that education and hard work can pay off in a multitude of ways. Thanks for being an inspiration to me and I am sure countless others.