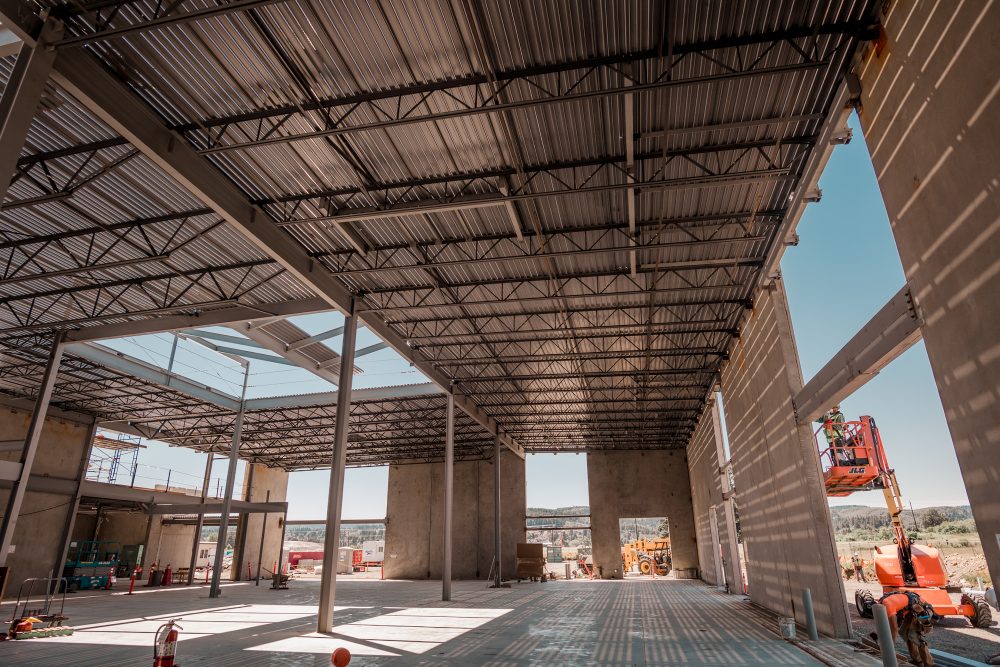 Teamwork and collaboration are integral to many industries, but in recent years they’ve been transforming the construction sector, and as a result, changing the way Portland Community College approaches capital improvement projects.

The construction of the PCC OMIC Training Center in Scappoose is one such project. At 32,245 square feet and a budget of $28.6 million, this world-class manufacturing and training facility represents a significant investment for PCC in Columbia County.

For the training center the college has chosen a collaborative project delivery method known as Design-Build, which the Design-Build Institute of America calls the fastest growing and most popular construction method used today in the U.S.

Traditional project delivery involves a linear, top-down approach with multiple contracts, which frequently results in costly change orders and delays. With Design-Build the owner manages a single contract in which a construction company either contracts for the design scope, or less commonly, creates an in-house design team.

Advocates say that having a single point of contact for both the design and construction phases completes buildings with fewer cost overruns and delays and less acrimony. But the process also requires considerable trust and cooperation among partners and can be a challenge for those who are resistant to change. 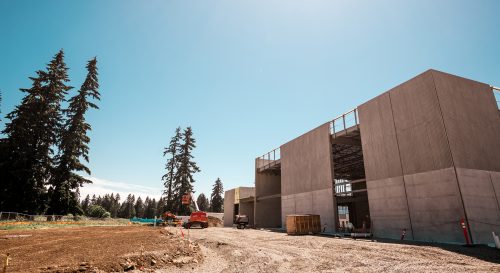 For September, the contractor is continuing to wrap up the interior sheetrock and ceiling systems.

For the training center, PCC’s Office of Planning & Capital Construction (P&CC) hired the well-known firm of Mortenson Construction. As its partner for this project, Mortenson chose a company with which it has done previous Design-Build projects, Hennebery Eddy Architects. Construction is expected to be completed in December.

Although this project marks the first time the college has used the Design-Build model, P&CC Director Linda Degman explained that the model made sense given the time and budget constraints the college faced with OMIC Training Center.

“The programming for the facility was still in flux and we had a very defined budget and aggressive schedule to meet,” said Degman. “We had heard about this construction model’s ability to simplify and better coordinate decision-making through planning, design and construction. These factors all prompted us to look for a Design-Build team for this project.”

P&CC project manager Gary Sutton said the model has already proven to be a good fit for the center.

“OMIC Training Center is a very unique project and a building that houses a variety of programs that we’ve never implemented in a collaborative space like this before,” he said. “The early pre-construction process was very exciting and having the general contractor lead the process worked very well. It was organized and streamlined.”

The center will be a hub for advanced manufacturing training, including Machining, Computer Numerically Controlled Operation, Welding and Mechatronics, complementing OMIC’s R&D work. Programming will be based on an apprenticeship model in order for students to develop industry-aligned skills. In addition, PCC will provide career-technical education and other courses as needed by the community.

Sutton explained that as the team moved into the construction phase it took some getting used to working with the general contractor on design issues, which in previous projects were dealt with directly with the architect or designer. But there have been important payoffs.

“This type of contract gives us flexibility to work more intimately with the general contractor and architect,” Sutton added. “Sharing information is more fluid and allows the contractor/architect team to respond quicker and be actively part of the solution process as issues arise.”

Degman said that PCC’s experience at OMIC Training Center is having an impact on other bond work across the college.

“Using Design-Build has allowed our team to learn from the process and leverage what this method can bring to create capital projects,” she said.

P&CC is using Design-Build to do bond improvements for the Dealer Services Technology Building at Rock Creek and the upgrade for the Automotive & Metals Building and College Center roof renovation at Sylvania (all scheduled to be completed in 2021).