This content was published: February 3, 2020. Phone numbers, email addresses, and other information may have changed. 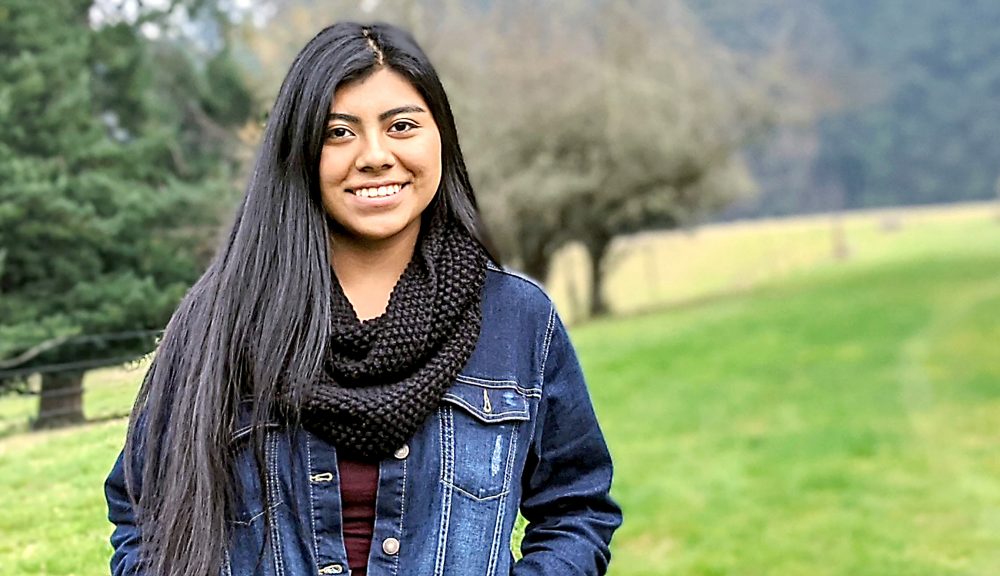 Diana Jimenez Rodriguez’s nerves told her she was on the verge of a major milestone in her life.

It was almost too much.

When she looked out in the audience, however, she saw the person who had most inspired her to take risks and embrace the challenges that are necessary to build a better life — her mother, Ana. 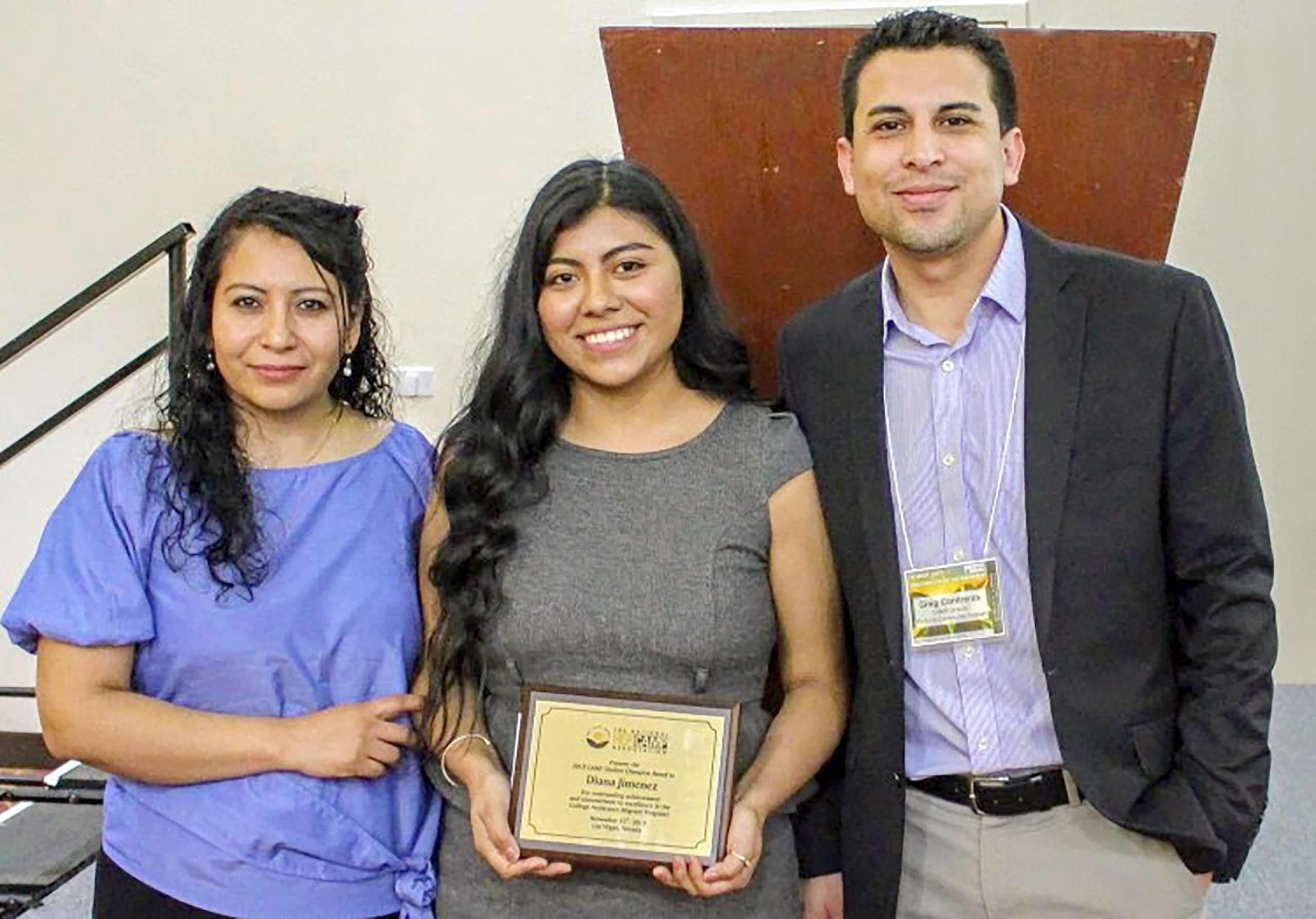 “I saw my mother’s expression, which was calm with a proud smile,” she remembered. “I realized how much she deserved to be there because of how hard she worked and struggled to raise her children by herself, providing us with supplies, clothes, and food to help us have a good education.”

Jimenez Rodriguez relaxed and began to speak. When she finished, however, she noticed something unexpected happening. The audience was standing and clapping.

“I immediately got goosebumps,” said Jimenez Rodriguez. “At that moment I felt very proud of myself and knew I had accomplished something very big in my life.”

“I recall a sense of anger running through my body as the alarm would go off,” she recalled of the workload associated with the job. “I loved the smell of the plants and the wet ground, but not the feeling of the icy cold, wet leaves scratching my hands or the aching pain of carrying a 12-pound bucket around all morning.”

But the work was always bigger than her. It was about “responsabilidad, familia” and a duty to support her mother, who had escaped an abusive marriage and was working multiple jobs to try to provide a better life for her children. No matter the conditions, Jimenez Rodriguez knew the modest income her berry picking provided was critical for her family’s survival.

“After hearing my mom’s voice while preparing our lunch, my frustration would quickly turn into compassion,” Jimenez Rodriguez said. “I knew we shared the responsibility of providing for our family.”

Yet the Forest Grove High School product still dreamed of a different life and a brighter future for herself and her family.

“On our way to work, I would look out the window of the cramped car wishing school was year long,” she said. “I would daydream about enjoying my summer vacation like other kids from school.”

A Chance with CAMP

In 2018, Jimenez Rodriguez got the chance to change her path. She was one of 45 first-year students from migrant and seasonal farm worker backgrounds accepted into a cohort of the federally funded CAMP Program based at the Rock Creek Campus in Washington County. 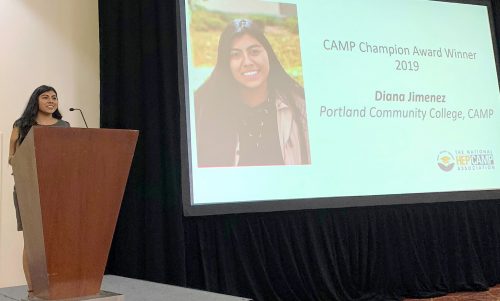 In this program, she received financial assistance, tutoring, mentorship, career counseling, and more, all designed to prepare her to continue her education at a four-year college or university.

According to CAMP Director Greg Contreras, the introverted Jimenez Rodriguez didn’t stand out in the group at first, but soon emerged as a quiet leader due to her academic success and wholehearted embrace of the experience.

“Diana entered PCC and CAMP timid, unsure, and with many questions surrounding her future,” Contreras said. “But she seized every academic, social, and cultural opportunity and resource to make the most of her college experience.”

Like her mother before, Contreras and others on the CAMP staff encouraged Jimenez Rodriguez to take on new challenges and go beyond what she thought was initially possible. This unwavering support eased her transition from high school, particularly as a first-generation college student, and inspired her to be more engaged and proactive in and out of the classroom.

“Being part of the CAMP cohort last year was a life changing experience,” she said. “If I had not joined CAMP, I would probably have settled into a routine that kept me from leaving my comfort zone or trying new ideas that motivated me to have a stronger connection with both PCC and my community.” 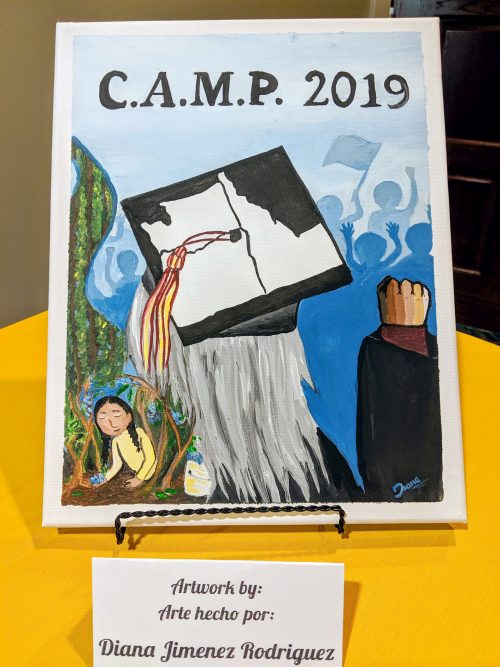 Today, Jimenez Rodriguez is one of several former CAMP students who serve as mentors in the program, helping this year’s newcomers adapt to the multifaceted journey of college life.

After completing her courses at PCC, Jimenez Rodriguez said she intends to apply for the Bilingual Teachers Scholars Program at Western Oregon University and pursue a career as an elementary school teacher so that she can help open the doors of education for more people, particularly those from a migrant farming background.

Meanwhile, she said she hopes her own first generation success story can inspire and uplift others in the fields and her own family as well.

“My younger siblings are watching me lead the way,” she said. “It’s a great honor being the first member of your family to go to college, but it’s more important not to be the last.”