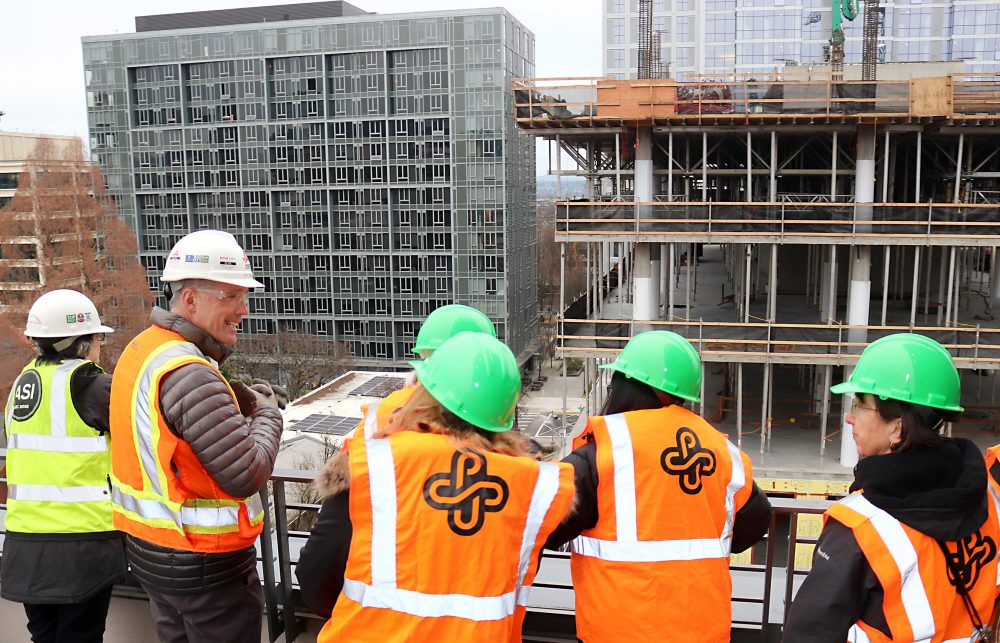 When Portland Community College first decided it needed more space to accommodate its growing Dental Program, the college didn’t envision being part of a leading-edge construction project involving two local universities as well as the City of Portland.

But after PCC’s 2008 bond measure passed, an innovative partnership became a reality. Come January 2021, the college’s Dental Program (dental hygiene and assisting) and its community clinic will move from the Sylvania Campus to the third floor of the new, seven-story Fourth & Montgomery Building now under construction in downtown Portland.

The building is jointly owned by PCC, Portland State University, Oregon Health Sciences University and the City of Portland. SRG Partnership and Andersen Construction are the designer and builder on the project, the same two firms that built OHSU’s Knight Cancer Research Building in Portland’s South Waterfront district. When the 175,000-square-foot Fourth & Montgomery Building is complete, 30,000 square feet will be occupied by PCC; the rest will house PSU’s College of Education, the OHSU-PSU School of Public Health, and the City’s Bureau of Planning and Sustainability.

PCC is contributing just under $24 million toward the new building, which has a total budget of $100 million. PCC’s share represents the more costly equipment required for the dental clinic and dental program. 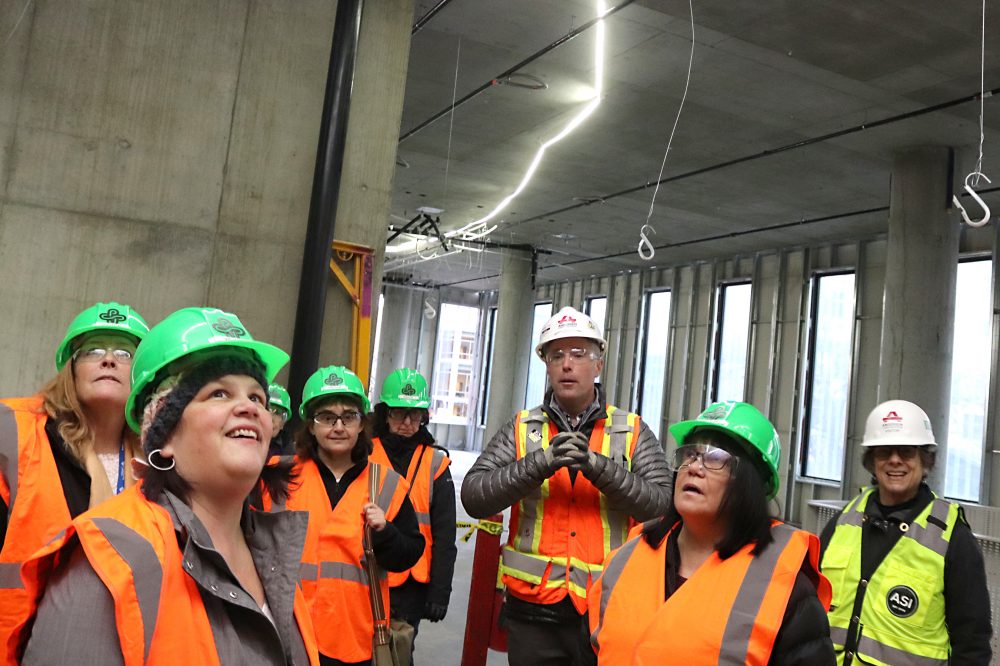 Slinger shows the PCC dental faculty the third floor, which will house the college’s dental facilities and clinic.

While students, patients, faculty and staff will enjoy a new, state-of-the-art facility, they won’t see the innovative approach behind its construction: Integrated Project Development (IPD). This approach grew out of the “lean construction” movement, which started in the ‘90s and is growing more popular in the industry as a way to control costs, reduce construction timelines, and increase efficiency and productivity — not just for owners but for architects and builders, too.

OHSU’s new cancer research center was built using this model and was finished on time and on budget. 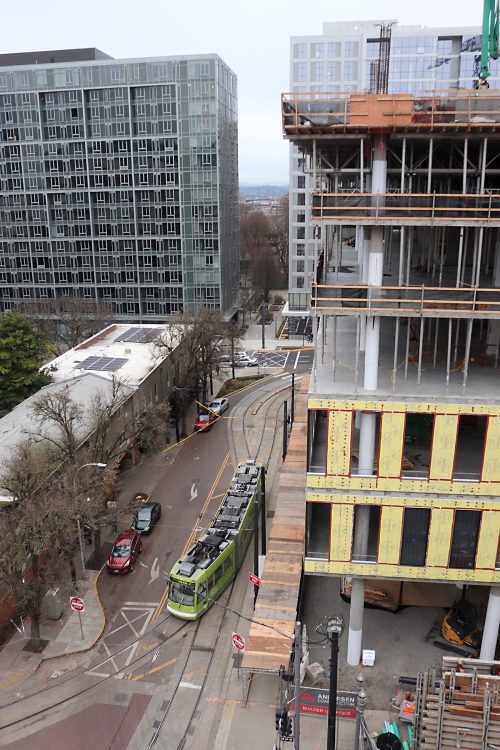 Traditional construction projects usually take a linear, top-down approach that can result in projects coming in over budget and past deadline, often with acrimony and even lawsuits. The IPD model helps minimize these issues by bringing the owner, architect and builder together as partners from the very beginning of the project (imagine a triangle instead of the linear model). Many IPD projects tie the partners financially under one contract.

In this instance, PCC and its partners set a target value and agree to a guaranteed maximum price. After agreeing to the scope and cost of an IPD project, liaisons from all partners meet regularly, often at a “co-location” space (such as a trailer) at the building site, continually collaborating rather than working separately. When one partner hits a snag, instead of trying to assign blame, the partners all look for ways to provide support, find a solution, and move the project forward.

Experts say the IPD model requires trust, communication, transparency and flexibility, and can boost morale. But by putting the project first, the approach helps reduce waste from rework, redundancy and lack of coordination. So far, the college’s first experience with IPD has been positive and holds promise for future bond improvements.

“It’s great for PCC to have the experience of doing a project in a different way,” said Debra Jarcho, project manager at PCC’s office of Planning & Capital Construction. “We’ve done a really good job of coming together as four owners and coming to agreements and understandings of direction and priorities.

“You have to build trust from the very beginning and keep nurturing it,” she continued. “The IPD encourages us to reach out to others to help us fulfill PCC’s mission in the community.” 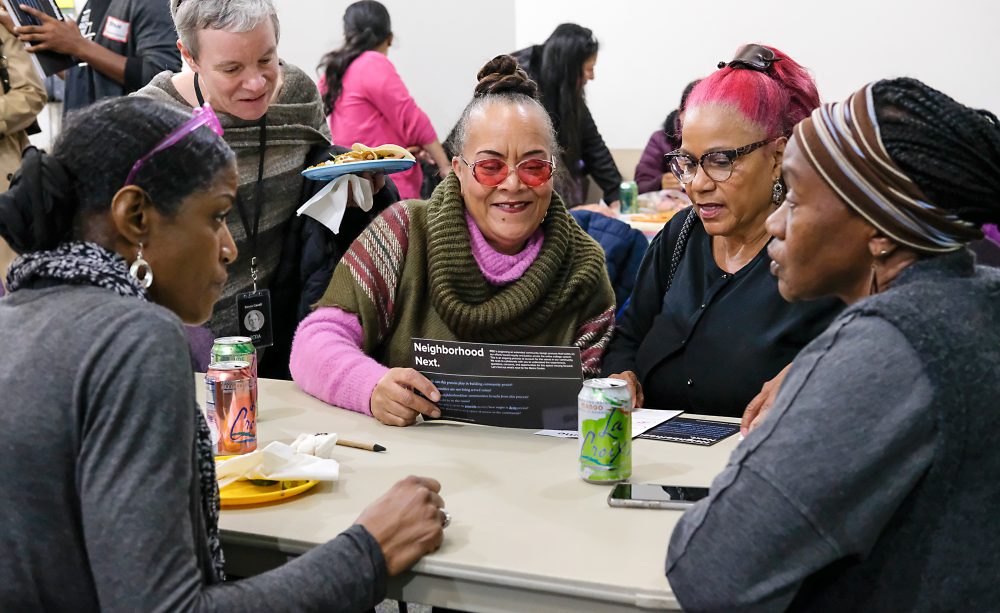 The recent outreach campaign by PCC and Living Cully surveyed 218 people through canvassing efforts and at community events.

Across town, another partnership approach is paying dividends.

Thanks to the passage of the 2017 bond program, PCC is redeveloping the Portland Metropolitan Workforce Training Center. This past fall, PCC engaged the Northeast Portland neighborhoods around the center to gather input on what services residents would like to see as part of the project. 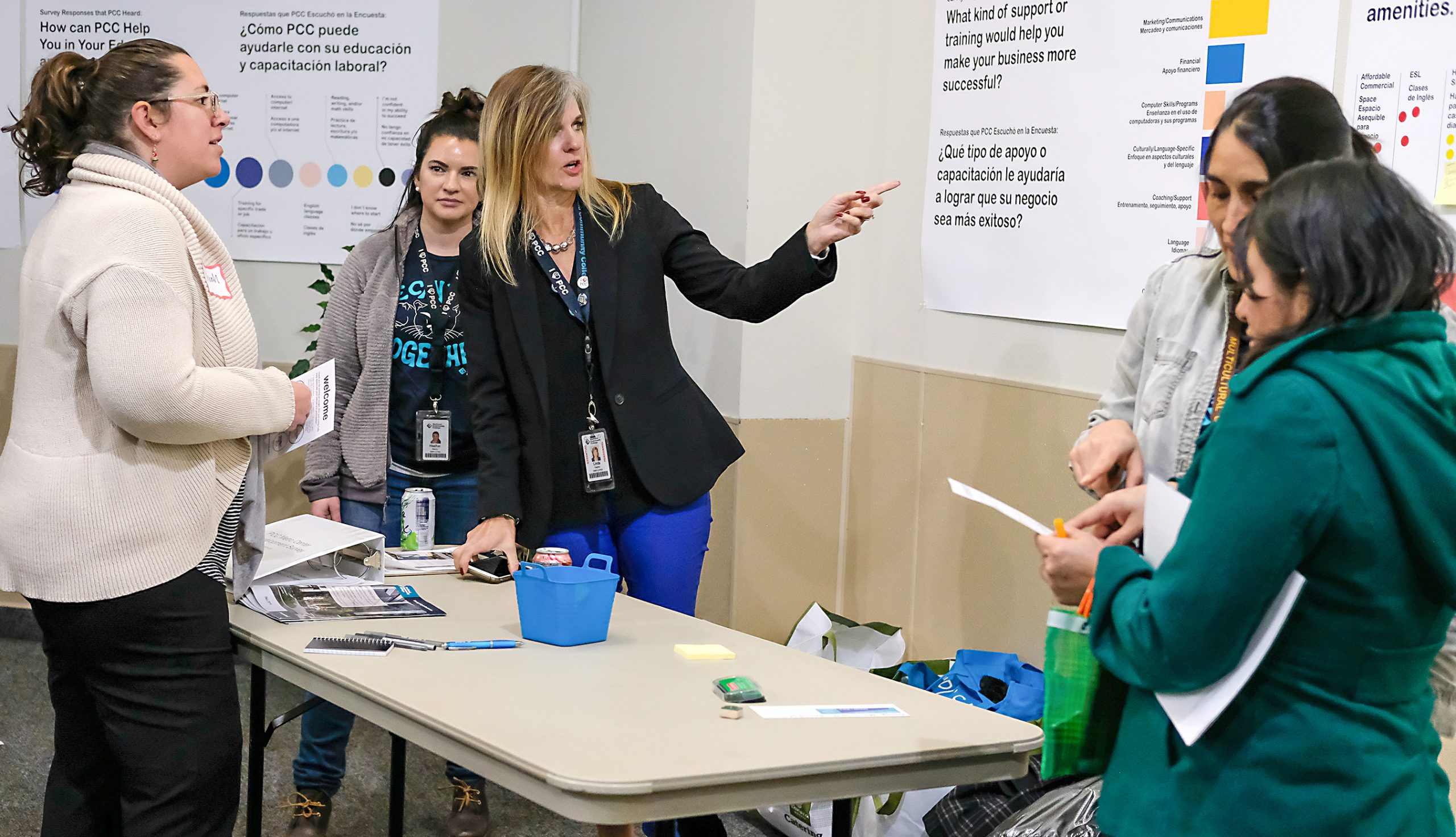 “The center will be a centralized hub that connects community members and employers to PCC,” said Pam Hester, regional director for PCC Workforce Development. “We’ll collaborate closely with our on-site community partners to ensure people have all of the wrap-around supports, resources, and encouragement they need to succeed. Working together in this innovative space, we’ll help people transform their lives and their communities.”

As part of its outreach efforts, PCC is working with Living Cully, an innovative collaboration between Habitat for Humanity, Hacienda Community Development Corporation, Native American Youth and Family Center, and Verde. Through this relationship, PCC is reimagining the new center, which will feature a multilevel facility with classrooms, offices and meeting space for both college staff and service partners, such as the Oregon Department of Human Services, and affordable housing units through a partnership with Home Forward.

“We are proud to be partnering with PCC to gather community members’ visions and priorities, not only for the PCC property, but for the future of the neighborhood,” said Cameron Herrington, Living Cully’s anti-displacement program manager.

PCC Steps Up to Fight COVID-19, The Brain Doctor, A Workforce by Design