This content was published: December 9, 2019. Phone numbers, email addresses, and other information may have changed. 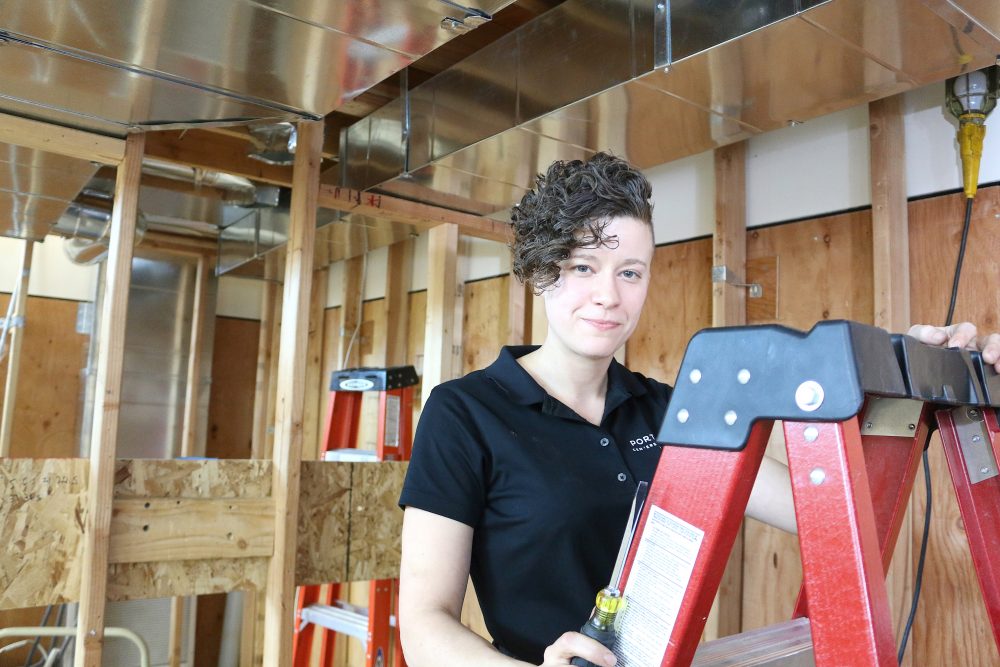 Leslie Smith inside the HVAC lab at the Swan Island Trades Center.

Not so long ago, Leslie Smith was really cooking.

Since the age of 14, Smith has worked in restaurants—from fine dining to burger joints, to everything in between—in the United States and overseas. In Europe, she earned a master rating in traditional Italian cuisine so she could work in the kitchens of Michelin star-rated restaurants.

But this career path wasn’t cutting it for the 31 year old.

“I realized no matter how high I flew in the restaurant industry, I was never really going to have the quality of life that I was looking for,” Smith said. “The experiences I had were really tough. You never feel stable because they kind of give you the impression that they could drag anybody off the street to replace you.

“I think the biggest hurdle was letting go and deciding to find something new,” she explained. 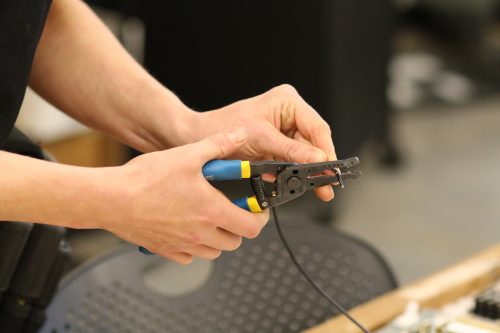 After spending more than a decade in the restaurant industry, Smith chopped her cooking career. She settled in Hillsboro and found work as a custodian for the Portland’5 Center for the Arts, which operates the city’s five main theater venues. As she started her job, Smith found training opportunities through Oregon Tradeswomen Inc., where she was exposed to a range of trades opportunities that helped build her skills.

“And that’s the one thing that I love about my job now is that I feel really valued,” Smith said of her work with Portland’5. “This is something I wanted to do.”

Determined to continue expanding skills in her new job, Smith transitioned into Portland Community College’s HVAC Career Pathways Certificate at the Swan Island Trades Center. Portland’5 took notice and created an apprenticeship so she could qualify to be a full-time stationary engineer, which maintains building systems.

Portland’5 joined the Metro Limited Building Maintenance Electrician (LBME) Joint Apprenticeship Training Committee (JATC), which partners with PCC. Smith’s employer became one of many of the committee’s registered training agents, who select qualified and motivated workers like Smith within their own ranks and have them enroll in PCC apprenticeship classes, which are also held at Swan Island.

“The employers provide the supervision, training and competency while the apprentices go to school here,” said Carrie Weikel-Delaplane, director of PCC’s Apprentice & Trades Program. “They also pay for the majority of the schooling.”

The Metro LBME JATC is not open to the general public. However, PCC’s Pre-Apprenticeship Program is open to anyone interested in developing similar trades skills.

“It makes people more competitive for an apprenticeship opportunity,” added Weikel-Delaplane of the pre-apprenticeship classes. “It’s a great way to go.” 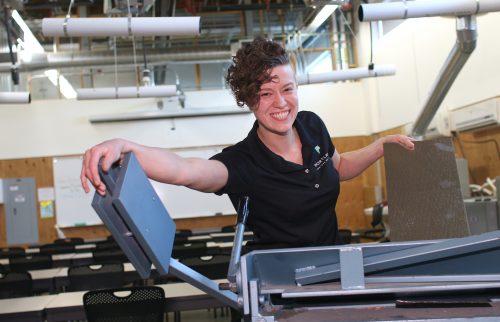 Smith works eight-hour days and goes to class at Swan Island in the evenings as she transitions into the stationary engineer role at Portland’5.

The Metro LBME JATC requires 2,000 hours of on-the-job training hours. According to program specialist Emma Gray, the employers on the committee struggle to recruit women into the program.

“We are working hard to change this,” Gray said. “Most manufacturing and trades industries in Oregon cannot fill all of the available jobs, and will never fill the jobs until they start expanding their recruitment efforts to include populations that have historically been excluded.

Smith works eight-hour days and goes to class at Swan Island in the evenings as she transitions into the stationary engineer role at Portland’5. Her days are spent working on preventative maintenance or troubleshooting issues that a building may have, from HVAC to plumbing to electrical.

Smith is no longer bouncing from job to job and has found a great employer who values her skills. She sports a 4.0 grade-point average and soon will possess nearly a dozen safety, electrical, HVAC and building licenses required for her position. Eventually, Smith wants to pursue an associate degree in Facilities Maintenance Technology and hopes to one day work as a facilities manager.

“This is a job that I could have for the rest of my life,” she said. “I realized pretty early on that my very best option was PCC, which is responsible for opening a lot of doors for me. When I needed to get an education and some experience under my belt, PCC was there for me.” 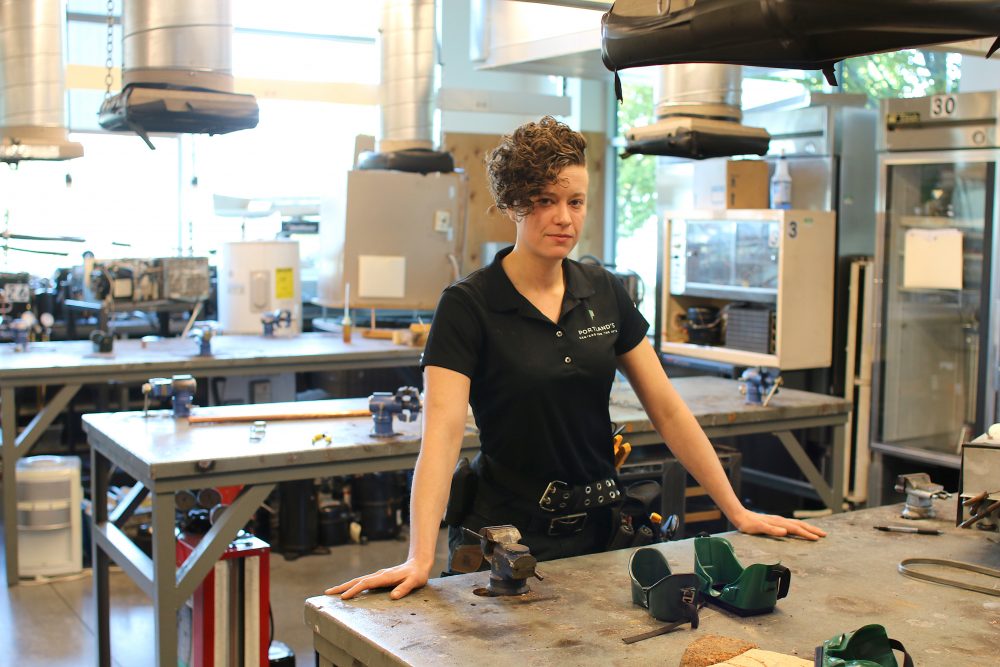 x by Tanya Erskine 2 years ago

x by Julie Bunker 2 years ago

As the Director of the department she is in at Portland’5, we are very lucky to have her!

x by March Brooker 2 years ago

x by Valerie Cochran 2 years ago

x by Jennifer 2 years ago

Leslie, thank you for telling your story. You show us all that you can continue to reinvent yourself with the power of education. Way to go!

x by barbara nelson 2 years ago

We absolutely need women in the trades. When all else fails, we know how to fix it!

x by Eddie 2 years ago

x by Rebecca 2 years ago

x by Gwen Porus 2 years ago

x by Cindy P 2 years ago

x by Victor 2 years ago

That is awesome to see Leslie working paying off.

Keep up the good work Leslie!

x by Sam Russ 2 years ago

Leslie you are so driven and I’m excited to share a shop with you! We, down here in the dungeon, don’t ever make the limelight. When and if we do, It’s usually due to some catastrophic event that needs to be resolved.

I didn’t know that you were a chef/cook (I don’t know the difference, sorry). Remind me to ask you about a recipe that I’m trying to perfect, LOL!!

Future is looking bright and everyone that knows you, knows it!

x by Donna 2 years ago

Your story is so inspirational. Thank you for sharing it with all of us.

x by Elaine 2 years ago

Thanks for the great story. It makes me PCC proud.

x by Scott 2 years ago

Now, go get your hair styled!

x by Rachel 2 years ago