This content was published: September 9, 2019. Phone numbers, email addresses, and other information may have changed. 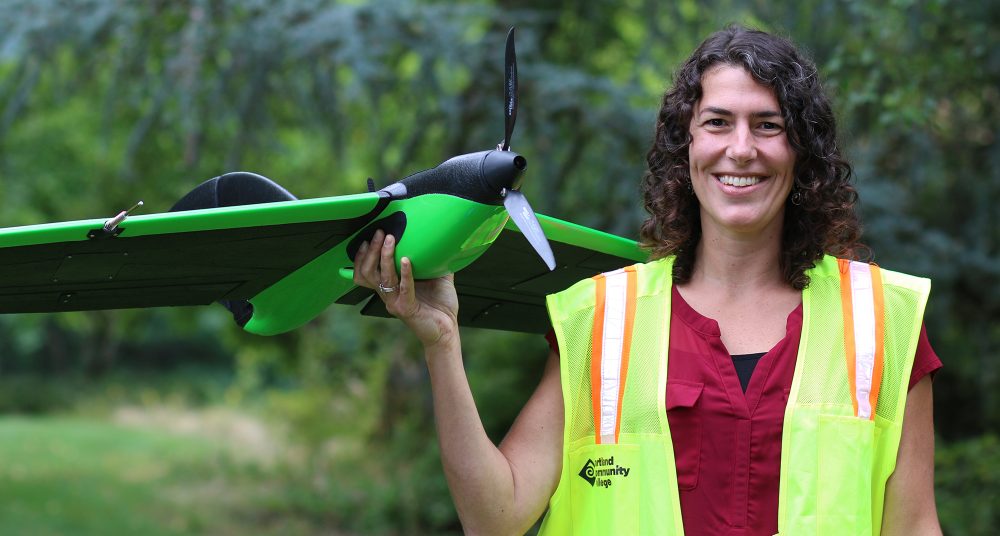 Christina Friedle is leading the geomatics movement at PCC.

As you step inside the bunker-esque lab deep inside the Sylvania Campus’ SS Building, it becomes quite clear that you shouldn’t judge a book by it’s cover.

Sure, there are concrete walls, floors and ceilings that would make a great shelter for, let’s say, a zombie apocalypse. But there’s more than meets the eye here. It’s the center of a burgeoning technology field called geographic information systems. 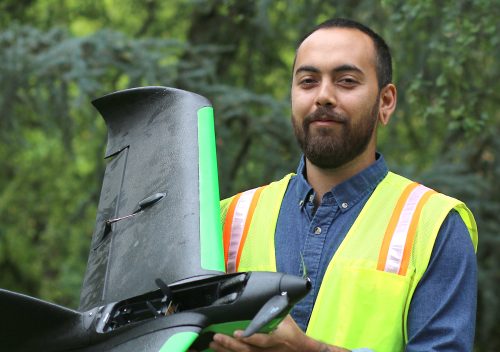 Rows of powerful Dell computers line the desktops where students use the latest software for cartography, modeling and stat analysis. Next to a colorful wall mural, geography instructor Christina Friedle opens a black cabinet filled with the next generation of GIS toys — drones. Standing with her are interested students, past and present, who have been impacted by her program.

Their eyes widen when they spot what are technically called Unmanned Aerial Systems (UAS).

The shelves are stocked with propeller and fixed-wing drones. These tools symbolize the new age of geospatial technologies where they’re used to survey land for development, environmental preservation, or for national security reasons, to name a few. These drones Friedle is showing off to the students are part of a re-imagining of her certificate within PCC’s Geographic Information Systems Program.

The National Science Foundation (NSF) recently awarded Portland Community College a $563,123 grant to establish the Enhancing Geographic Information Science Technology Education Project (eGIST). It will provide up-to-date equipment for the GIS labs, examine curricula for inclusionary approaches for under-represented students, and recruit and retain those students in STEM fields. Another focus of the grant will be creating stackable credentials in geomatics, GIS, and UAS through partnerships with the NW Geotech Center.

“This project is needed to train the next generation of geomaticians in Oregon,” comments Friedle, who leads the project. “Many of the trained surveyors today are not familiar with geospatial technologies that have become more relevant in the field of land surveying.” 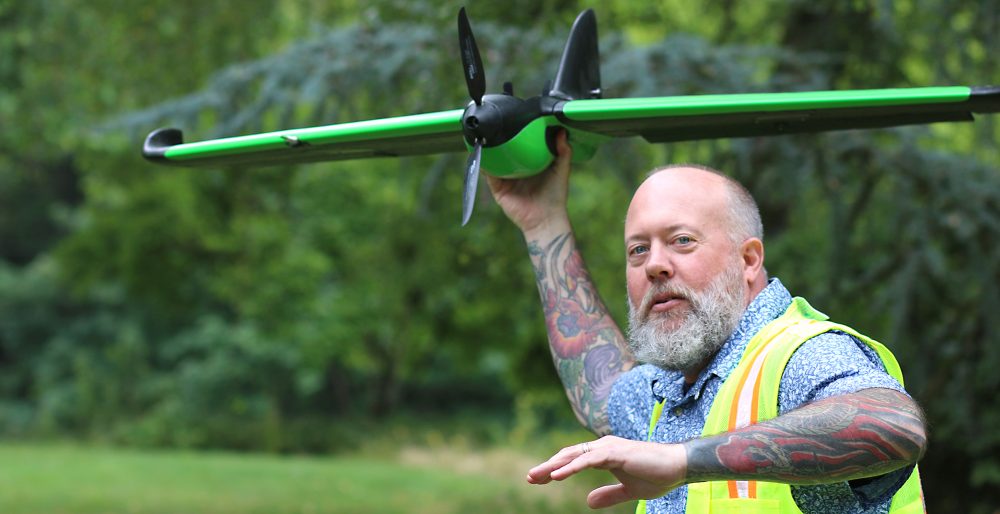 Mike Holscher is a biologist extraordinaire.

She pulls out both types of drones and starts assembling parts. Assisting her is one of the students named Mike Holscher, who can’t stop smiling.

Holscher completed his certificate from PCC in 2016 but returns regularly to keep current on the new tools of the trade. He’s a biologist by trade and after going through the program he now works for an environmental consulting firm as a GIS technician and is a “Part 107” drone pilot-in-charge.

“I use drones to remotely collect images for the wetlands we map,” Holscher says. “We try to do a forensics kind of investigation. We go back and see where the wetland boundaries used to be and then try to calculate an impact area. I couldn’t have picked a better job.” 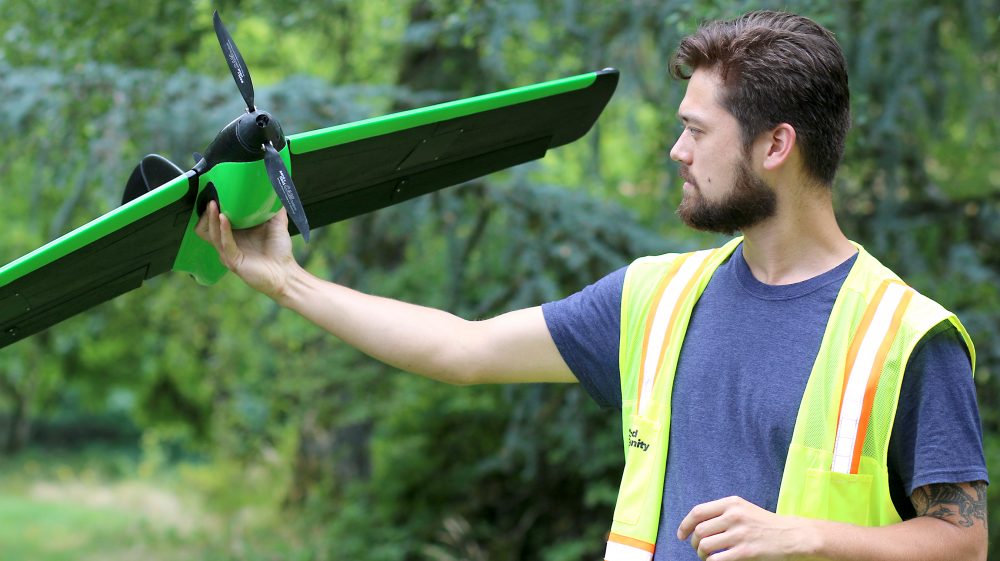 Devin Shiang is into the study of human geography.

Devin Shiang helps snap the propellers into place on one UAS. He discovered GIS while taking a human geography course as part of his associate degree. Human geography is the study of people and how they interact with their lived spaces.

“I like studying how cultures have interacted with their environments and moved through the world over time,” he asserts. “Every teacher here is very passionate about what they do and all work in the industry.”

Now outside on the campus’ quad, the drones are ready for flight and Friedle is pleased. Some of the pupils have the typical multi-rotor drone that can hover at precise locations and positions while another holds the fixed-wing UAS, which can map larger areas and can stay in the air much longer.

As evident by this group, Friedle is training the next generation of GIS technicians to fill a need for qualified workers. According to the U.S. Bureau of Labor Statistics, jobs like cartographers and photogrammetrists are projected to grow 19 percent and geoscientists by 14 percent through 2026. This is creating a skills gap as there are more jobs than workers.

“PCC is in a key position to fill this gap in Oregon because we already have established programs and have the expertise, skills, and technology to train the future geomaticians,” Friedle says.

All three of the students are either using the skills in their jobs, are entering the workforce, or will enter it once they graduate. Their journeys all began in that lab in the basement of SS Building, launching them into a field desperately in need of trained GIS technicians.

“I’m planning to earn my bachelor’s in geography or something in data science,” Shiang adds as he watches the drones finish their flights. “In the meantime, I’m looking for work and applying for internships. PCC is very much oriented toward people like me who are going back to school to find work.” 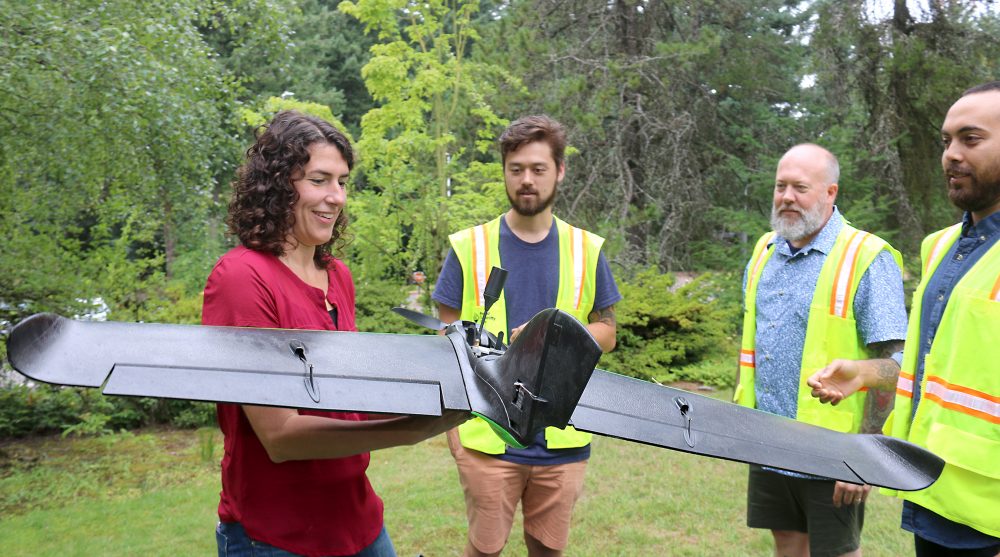 Friedle has the drone and her geomatics program ready to launch.

x by Vitaly Murphy 2 years ago

I am extremely interested in learning to fly drones and in the possibility of earning this Certificate through PCC…..

Please can someone send me more information on when it will begin and how to be considered?

x by Tony Greiner 2 years ago

This is the type of thing Community Colleges do so well. Hat’s off to Christina Friedl!