This content was published: October 31, 2018. Phone numbers, email addresses, and other information may have changed.

For students and staff at the Sylvania Campus, the fresh grass on the new lane that winds gracefully between College Center and the Health Technology Building is a welcome sight amid all the campus’ hard scape. But there’s more to this seemingly simple improvement than just lawn. 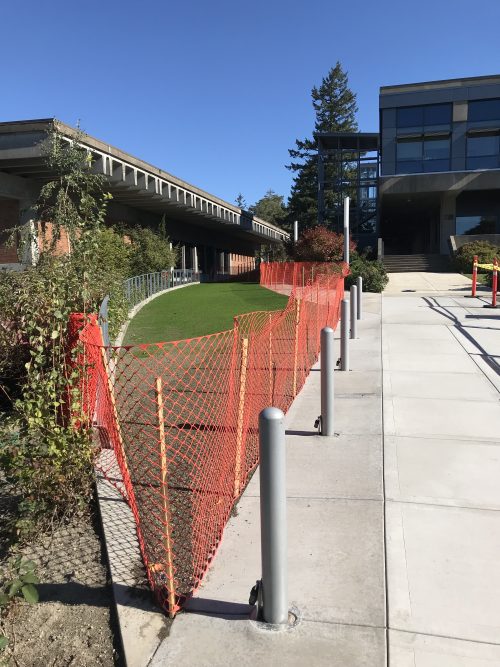 A new Plaza Access Lane was recently built between Sylvania’s College Center and Health Technology buildings to provide ADA access as well as emergency and construction vehicles to the west side of campus via the G Street ring road.

This latest project, funded by the 2008 voter-approved bond measure, is an important feature that finally provides ADA access to the G Street ring road on the west side of campus. The 235-foot-long Plaza Access Lane (PAL) was also constructed to allow vehicle access for security, EMS, FMS and general contractors.

Project manager Gary Sutton explained that initially the lane was built to allow construction crews to work on a variety of projects, including setting up HVAC units on the roof of CC and bringing in a small crane to the erect the North Elevator.

“The money we saved by providing this access for construction activities allowed us the opportunity to make PAL a permanent feature for the campus,” he said.

In addition to ADA and vehicle access, PAL has another benefit: The 3,660 square feet of what looks like sod is actually made up of  special grass pavers that mitigate storm water runoff.

“These are hollow pavers used for the construction of permeable pavements,” said Sutton. “They are installed using plastic honeycomb grid systems placed on top of a compacted crushed rock base. They have the structural integrity to be driven on while allowing water to penetrate into the soil below.”

The lane’s grass is watered with automatic sprinklers and has locking pipe bollards at the west entrance to mitigate unnecessary traffic.

“Grass pavers are not a new system, but they are new to PCC,” said Sutton. “What’s cool is that this entire idea was borne out of the need to find a cost-effective way to renovate the CC with minimal impact to ongoing operations on the campus.  It’s exciting that we not only found a relatively easy way to gain construction access, but we were also able to create a permanent focal point at Sylvania which benefits PCC’s commitment to safety, ADA accessibility and storm water mitigation.”

x by Anonymous 1 year ago

The news feed has been flooded lately with stories about improving accessibility and recognizing disability. The truth is that the whole thing is complete BS.

My former supervisor at PCC spent months threatening me with disciplinary action for having a disability, even though she conceded that my disability had no effect on my work. I reported her to HR/Maria Mendez and they did nothing.

My former supervisor still works for PCC and was recently given an award.

It is nice and smooth and is fun to ride my skateboard down!