This content was published: April 9, 2018. Phone numbers, email addresses, and other information may have changed. 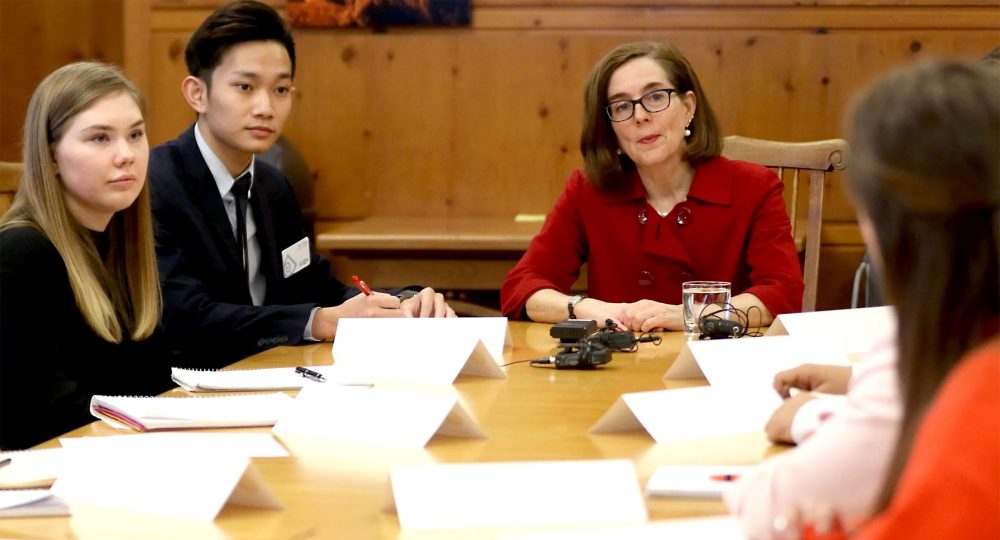 For Kien Truong, college seemed out of reach.

The cost of tuition and textbooks would be too high of an obstacle for his parents, who spoke no English and were working low-income jobs. In addition to these barriers, he and his family had just immigrated to the U.S. from Vietnam, and the thought of immersing himself in a post-secondary American institution was daunting.

“I was afraid because I would be the first person in my family to go to college,” recalled the Southeast Portland resident. “We didn’t have a support group, and there was culture shock. We survived on our own, but at first my dad couldn’t find a job and we were running out of money. As a last option, we were planning on borrowing money from back home in Vietnam just to survive.”

His father and mother would eventually find better paying jobs, but they weren’t enough to support a college education. In high school, Truong and his siblings found a counselor who was Vietnamese, too, and who helped guide them on how to navigate school and find resources. Meanwhile, it was Truong who had to step up to assist his family. 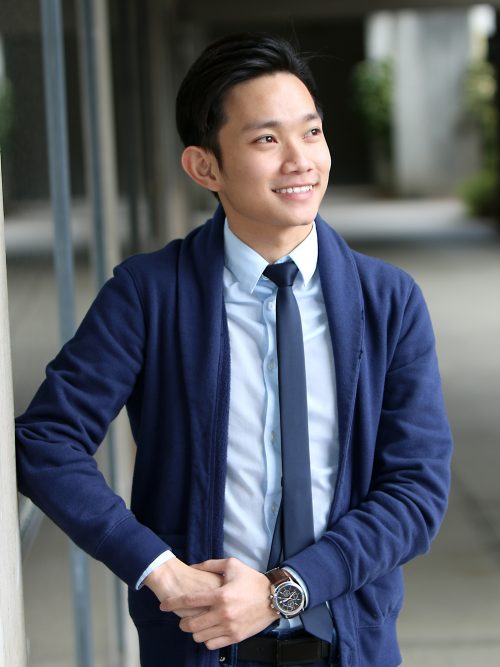 As an Achieving the Dream 2018 DREAM Scholar, Truong has been on a speaking tour, sharing his inspirational success story.

“I had to know to speak English,” he said. “I would always start conversations with questions on how to do this or that, in order to learn. I’m the oldest child and my parents don’t speak English, so it was on me to learn how to open bank accounts, apply for food stamps and healthcare, translate bills, schedule doctor appointments, and act as guardian for my younger siblings.”

Eventually his fears and financial worries melted away. When Truong had the courage to enroll at Portland Community College, his English for Speakers of Other Languages teacher at Franklin High School steered him into PCC’s Future Connect Scholarship Program — a student success program that provides first-generation students with wrap-around support through academic coaching, mentoring, skill-building and scholarship assistance.

Future Connect was the launch pad he needed to take off. The 21-year-old is in his final year at PCC, earning his associate degree with a 3.7 grade point average and ready to transfer to a university to complete a bachelor’s degree in international studies. When Truong isn’t organizing the annual Multicultural Night (which is coming up on May 15 at the Southeast Campus) or serving the college in its district student government, he’s hard at work representing all students on the PCC Board of Directors — just the second student to have ever done so. And, he has been selected to serve on the Association of Community College Trustee’s Student Advisory Committee.

“I want to be a community college president someday,” Truong said. “Community colleges are the bridge to help students find their academic footing. So far, it has been a great learning experience working with higher-level decision makers on the board and seeing how they work to support students. My voice gets heard, and they really do ask me what I think. I really appreciate that.” 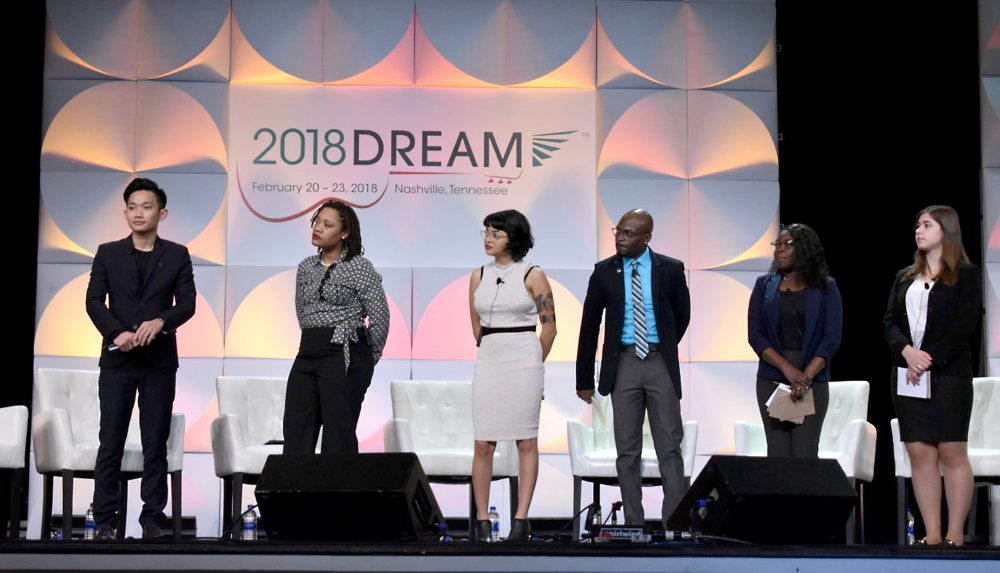 He spoke at the ATD national conference in Nashville last month.

As an Achieving the Dream 2018 DREAM Scholar, Truong has been on a speaking tour, sharing his inspirational success story to much applause at conferences around the country, like the Association of College Unions International confab in Anaheim, Calif.

Each year, Achieving the Dream conducts a national competition among students in its network of colleges, to participate in a year-long experiential learning program that enhances leadership, critical thinking, and networking skills for those selected as Dream Scholars. Students are nominated by their institution and chosen through a competitive national application process. They are given the chance to attend and present at ATD’s annual professional development conference in Nashville, Tenn.

The opportunity for Truong to be chosen as a Dream Scholar arose from PCC’s membership in the ATD network. And the college has used its membership to create the Yes to Student Success (YESS) framework, which is led by vice presidents Rob Steinmetz (Student Affairs) and Katy Ho (Academic Affairs). It is an institutional strategy aimed at increasing student success through building guided pathways, enhancing support services, implementing diversity, equity and inclusion tactics, and increasing PCC’s data and technology capacity.

“With the help of ATD resources, our college will be better positioned to increase student success rates, without lowering academic standards, and identify and bridge key regional workforce skills gaps so that students are prepared for success in college, work and life,” said PCC President Mark Mitsui. “We’re tailoring ATD’s offerings to fit PCC and our needs. YESS is that framework for our aligned set of strategies, to enhance solutions that help students overcome barriers and succeed equitably.” 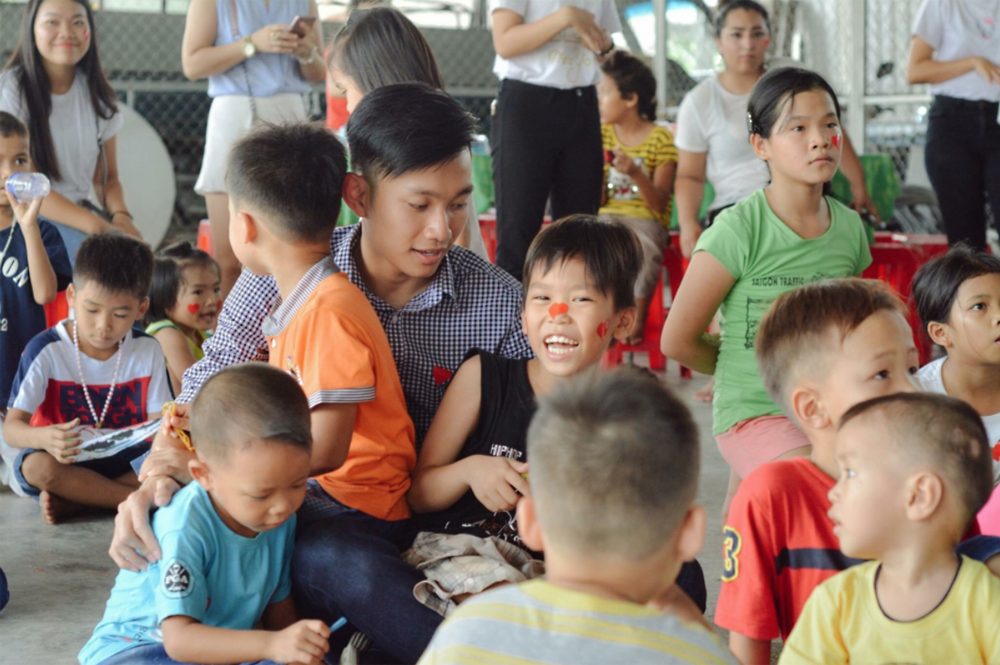 Removing barriers to college success is what motivates Truong, who serves on the YESS steering committee. Truong immigrated to Southeast Portland after his junior year in high school, enrolling at Franklin High School with his siblings (he has a younger sister and brother).

“Coming to the U.S. was one of the most transformational moments of my life,” said Truong, who is the recipient of the 2018 PCC Diversity, Equity & Inclusion Climate Impact Award. “It was a difficult transition with many struggles.”

Truong was able to overcome barriers thanks to that high school guidance counselor and the wrap-around support services of Future Connect. As he succeeded, though, he became concerned with the high cost of textbooks, recognizing that their affordability is a major obstacle of many students. He joined PCC’s Open Educational Resources (OER) Steering Committee in 2016 and helped organize the Textbook Affordability Campaign, where students shared stories about the impact of textbook costs on their academic journeys. 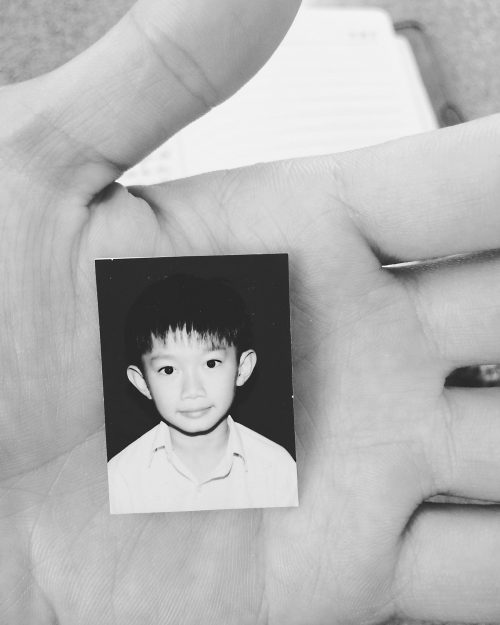 Truong’s amazing journey has inspired other students to complete college.

Since its start, the OER initiative has saved students more than $2.4 million in textbook costs. And as a result of his tireless work, Truong was honored with the Student Activism Honor Award by Oregon Open Educational Resources.

“This award motivated me to work harder, so that not only could I contribute to the OER movement, but also encourage other students to join me in this effort,” he said.

Truong, who has worked as vice president of service with his chapter of Phi Theta Kappa, has never rested on his laurels. In addition to his OER contributions, he helped found the PCC chapter of Passion Impact, a non-profit organization devoted to encouraging and facilitating long-term student volunteering. He also serves as event coordinator for the Unity Through Diversity student club, and helped raise $2,000 to buy food and school supplies for Vietnam’s Nhan Ai Orphanage last summer through the Spread the Love Project.

And mindful of his origin, Truong has always lended a helping hand to the Vietnamese Student Association, which supports international students and their navigation of college resources.

An effort, he said, that helps make college within reach for more and more students just like himself.

x by Kole Myrick 4 years ago

Kien, what can I say? You amaze me with everything you do to help make this community a better place. We should all have your passion and work ethic! I am so proud to have met you and I hope that our professional lives will cross paths in the future!

x by Blake Hausman 4 years ago

Kien, you are a true inspiration to us all. I’m honored to have been able to work with you at Southeast. Many many thanks for all you do!

x by Linda 4 years ago

Thank you, Kien, for your ongoing and tireless work to make the world a better place. PCC is fortunate to have you as a student; you are an inspiration to all who struggle–and succeed!

x by Jenn Aarness 4 years ago

Kien,
Thank you so very much for your continued efforts to improve the lives of others. Your dedication and hard work is an inspiration to me. I relate to a few aspects of your story and hearing of your success pushes me to work harder to achieve my goals and aspirations in life. I am inspired by the great number of organizations and projects that you’ve been apart of. I’d love to get that involved in my community. How do you learn about such opportunities? I’d love to be able to chat with you and get to know you.

You are an incredible gift to our community and our school.

Thank you for all you do.

x by Kien 4 years ago

Thank you Kole, Blake and Linda for your support and kind words. I never stop being proud to be a community college student.

Jenn Aarness, you can always reach me at kien.truong2@pcc.edu and I would be more than happy to chat with you.

x by Yan 4 years ago

Many dreams will come true if you keep them going.
I wish for you to fly higher and higher.

x by Joseph Corrado 4 years ago

Kudos, Kien! Thank you for your gusto at PCC.

x by Vy Nguyen 4 years ago

x by Hoang Nguyen 4 years ago

Very well done Kien. You made Vietnamese students proud of you. Your path to college is a lesson for us all.
Hope to work with you someday.

x by Daniel 4 years ago

You’re an awesome individual and I feel honored that I was able to get to know you and do a project with you. You continue to inspire and amaze students and faculty. Keep it up and the world is yours.

x by Hector 4 years ago

Eyyy! That’s my guy!!!
Way to go, he is such an amazing person and a super nice guy.

x by Kien Truong 4 years ago