This content was published: August 7, 2017. Phone numbers, email addresses, and other information may have changed.

No matter the obstacles, Ivan Hernandez finds his way in life 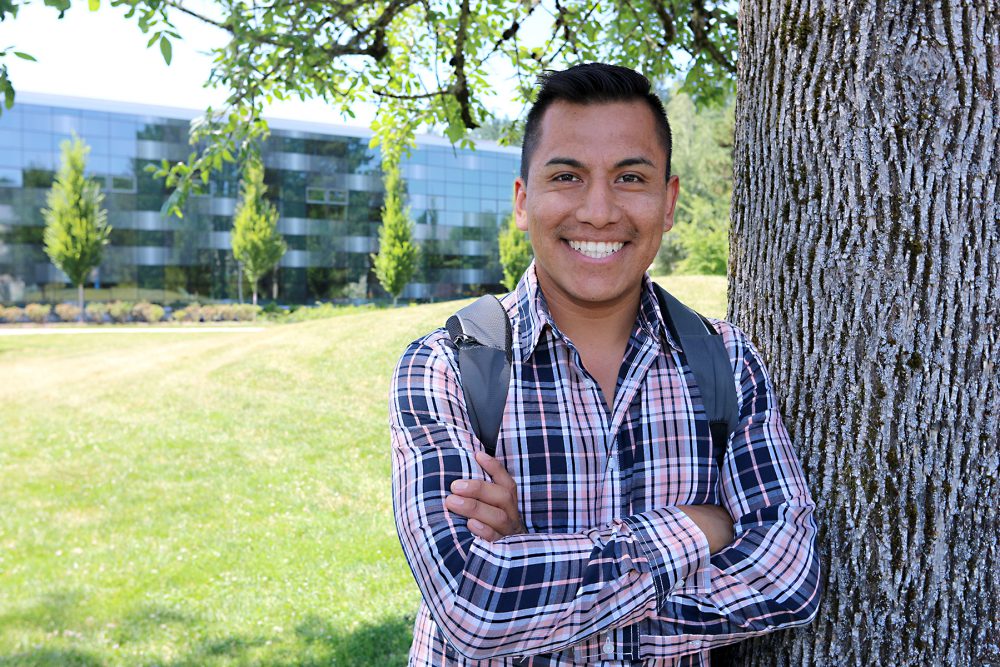 Ivan Hernandez just wrapped up his year as student body president of PCC’s Rock Creek Campus. With a daily routine that might crush the average person, many on campus now believe he can actually be in two places at the same time.

In order to join his father, a migrant worker in Oregon, Hernandez immigrated to the U.S. when he was 12 with his mother, his brother and two sisters. His early work experiences included working in landscaping, construction, kitchens, waving sidewalk signs and caring for people. None of the jobs paid much, with some paying as little as $4.20 an hour, but the caregiving job offered a more flexible schedule, which allowed him to enroll at Rock Creek.

Hernandez said that as a young person, he was not a good student. For acting out and for chronic lateness, he clocked a lot of hours in detention. 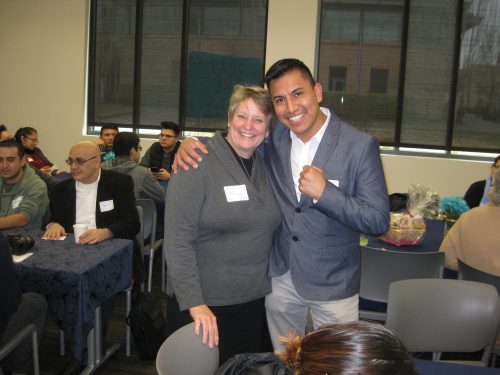 “I had a habit of not doing my homework because I didn’t have a goal to keep me focused,” he recalled. “Then, in my junior year of high school, my English teacher stopped asking me about my work. Instead, he just ignored me. I couldn’t believe it. It bothered me so much that I started doing my homework.”

Hernandez finished the class with an “A” and did well in his remaining classes, getting involved in student leadership. In 2007, he attended the Oregon Migrant Student Leadership Institute (OMSLI) at Western Oregon University. In 2008, Hernandez returned as a mentor. He says it was one of his greatest high school experiences.

When he arrived at Rock Creek in the winter of 2014, he was determined to be an active student and he worked his way through student leadership. In addition to his studies and his commitment to the community, he worked, sometimes at three jobs. In the fall of 2016, two years after he first stepped onto the Rock Creek Campus, he was named student body president. He credits his success with his relationships with the campus’ Women’s Resource, Career Exploration and Multicultural centers.

“In the CEC, I learned different communication styles, and in the WRC I learned to be an ally for feminism,” Hernandez said.

Hernandez is well known at Rock Creek, and his enthusiasm makes it easy to find him in a group.

“Ivan is a high energy person but he is also a good listener, and he can hear and accept different points of view,” said Mandy Ellertson, manager of Student Life and Student Leadership at Rock Creek. “He doesn’t judge people, and his leadership style is inclusive. He makes room for people and is very engaged.”

When asked why he has worked so hard, Hernandez shared a memory.

“I remember going to the mattress store with my family,” he said. “When we told the clerk what we wanted, she told us that the mattresses were expensive and we should go to another store to find something cheaper. I’ll never forget it. I’m going to make sure that my family never has to go through that type of experience.”

Success always has a price, and for Hernandez, he shared thoughts of feeling isolated.

“There is a lot of joy that comes with being a leader, but it can be lonely,” Hernandez warned. “I don’t have a lot of time to just hang out with friends or family. When you reach a certain point in life and you want to make changes, you often have to take responsibility and work alone. I hope to always have a call to action–ideas that lead to change, change that can be shared. That’s the antidote for feeling alone.”

Hernandez will graduate from PCC next June and then attend Pacific University, where he will pursue a degree in political science. After that, he plans to start his own marketing firm and eventually earn his master’s degree in Business Administration.

“The long-term plan is to earn my Ph.D. in leadership and education and then return to Mexico to get involved in politics,” he said. “In September of 2036, I’ll run for the Office of President of Mexico and will improve the education system.”

He makes the final statement with a straight face. There is no trace of doubt or playfulness in his voice.

No one in the room questions him.

Want to Find Your Success?

Learn how you can become a new student and sign up for the courses you need.

x by Jan Abushakrah 2 years ago

What an inspiring story about a wonderfully energetic and inclusive leader committed to social justice! Thanks, Ivan, for all that you do!

x by Susanna W 2 years ago

I am so proud of you, Ivan. You’ve done so much in your time at PCC and I’ve always said (and believed) that you would accomplish amazing things. Keep rocking and know that so many of us are cheering for you and believe in you!!! :)

x by Erika Ramirez 2 years ago

Wow! Proud of journey you have passed through and achieved so far. Not letting anything stop you, instead using bumps in the road to encourage you to push through. a degree in leadership and all these years of leadership experience will contribute to your ultimate goal. Mexico needs new era leadership skills and so that is wise to uplift the country by introducing these assets. Having a similar leadership training and community service experience as yours, including leadership degree and communication skills has been pivotal in direction the future goals are and will come to pass. Leaving a positive imprint of perseverance, humanity and leadership skills that serve and support the community that encourages trust and followers that believe in the same visions for positive change will be an accomplished goal of a lifetime.

x by Paola Torres 2 years ago

x by Les Rivera 2 years ago

I have met Ivan and am always in awe of his vibrant personality, energy, and interest in helping others. He is an excellent human being. His story is very electrifying and inspiring, to say the least. What a great role model for us all.

x by Jaime 2 years ago

Great story on Ivan. Having known him for over a yea, I can see his passion for learning and sense of responsibility to be inclusive of others. His energy is contagious and I await to see all that he accomplishes.

x by Moon 2 years ago

Ivan… I am so proud of you!!! I still remember our conversations when we both applied ASPCC position in 2014 and 2016. We did not get the position in 2014, but we got the job last year. Student Leadership is such a wonderful program. Can not wait to know how far you will go in your future! You are awesome!

x by Jose Hernandez 2 years ago

If you make Mexico an educated country it will be a rich country, it already is, but with education Mexicans will not just produce physical output but intellectual property as well. If you have 75 million educated Mexicans, Mexico will become the new Babylon of our times. Rich in culture, rich in natural resources, rich in education, and strategically positioned between North and South America. Mexico can be the developer of a system which cares for progress of all its people through education, it does not matter how rich or poor or what skin tone you are.

x by Narce Rodriguez 2 years ago

Ivan: Your picture and story made me smile and I feel a lot of pride for you and your family! La foto casi habla y tiene muchas personalidad. La jornada de tu historia y camino academico es inspirante.

What a great profile and positive story. I only wish the other campuses of PCC were as welcoming to Mexican students as Rock Creek. Sylvania certainly has a long way to go.

x by Ja’qlyne Slaughter 2 years ago

Ivan!! Thank you so much for sharing your story! It inspires me to never give up, no matter what obstacles I face. Thank you for modeling the behavior of someone who can succeed both in community relationships and academically!

x by viviana villa 2 years ago

How do I upload my success story?

x by noah 1 year ago

Nice i know him

x by trabieso 1 year ago