This content was published: December 12, 2016. Phone numbers, email addresses, and other information may have changed. 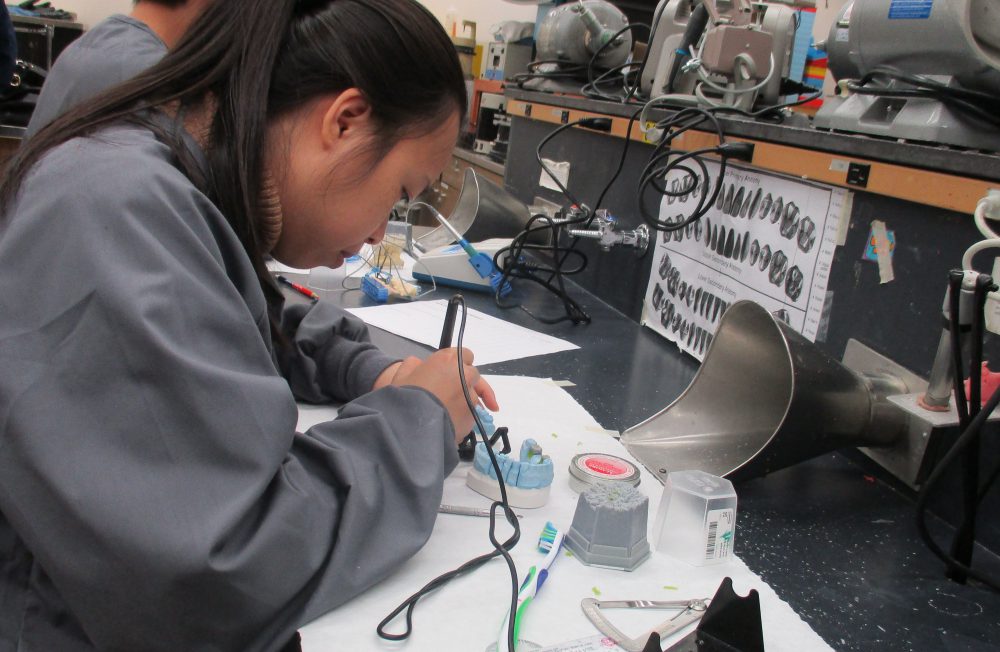 Whether you love or loath them, the health professionals who take care of your teeth are usually right in your face cleaning, drilling, filling cavities and taking X-rays. But behind the scenes are the dental lab technicians who painstakingly sculpt, mold and solder the inlays, dentures, crowns, bridges and implants that many of us depend on every day.

In Oregon, there’s only one place that trains these technicians: Portland Community College. Consequently, graduates are in high demand and most find employment within six weeks of graduation.

The work requires strong eye-hand coordination, attention to detail, and some artistic ability. But technicians also need to be comfortable with computers and learning basic science. This unique skill-set is what drew Greg Boswell to PCC’s Dental Laboratory Program. Although he earned a bachelor’s degree in ceramics from University of Oregon and has experience with tile making, Claymation and foundry work, he also worked for five years as a scheduler of nurses and wanted a career that incorporated healthcare. 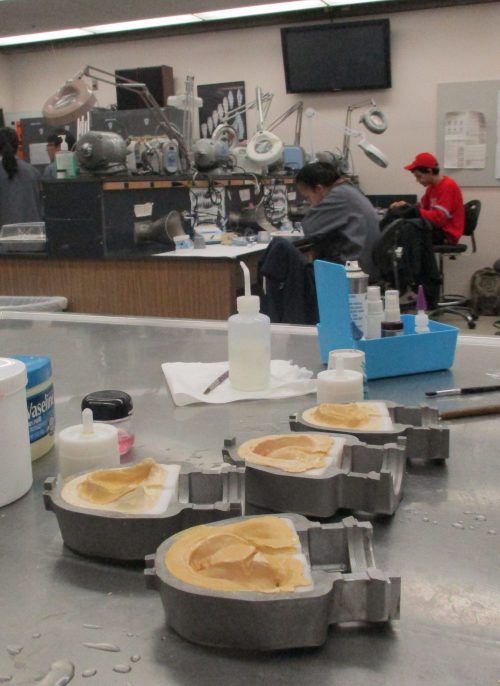 Molding dentures, foreground, is part of the curriculum of PCC’s Dental Laboratory Technology program, which has been at PCC since 1967. The majority of local dental labs are owned by graduates of the program.

“I feel like I kind of imagined this program,” said Boswell. “It really covers my bases in terms of creating physical art, as well as the healthcare side and really performing an important service for the community. There really aren’t a lot of states that have a program like this, and one happened to be here in Portland, so I was really excited about that.”

Students study a broad-based curriculum in dental laboratory technology as well as some elementary anatomy, chemistry and physics. They learn how to design and fabricate the complex restorations that duplicate tooth form and color using wax, a variety of metals, acrylic resins and porcelain.

At PCC’s Sylvania Campus, students can earn a two-year certificate in Dental Laboratory Technology or, with the addition of the general education degree requirements and completion of the college math and writing competencies, they can earn an associate degree. With either, students are eligible for the national certification examination.

Although there are 45 dental lab tech programs in the U.S., only 18 – including PCC’s – are accredited by the American Dental Association (ADA). PCC has had a lab tech program since 1967. But starting salaries for technicians – whether they were hired with or without training – hovered at minimum wage. In addition, starting around 2000, participation in PCC’s program waned as more dentists began outsourcing the fabrication of prostheses to overseas labs. So in 2015, PCC decided to close its program.

But along with outsourcing came problems. Patrick McMurray, a first-year dental lab instructor, said that materials and workmanship of the foreign prostheses were often substandard.

“They analyzed some of the metal and found it contained lead,” he said. “They were also having problems with quality control. They would send something over and then somebody here would have to fix it up.”

As a result, some of the work that dentists sent overseas has begun to return to domestic labs. According to the National Dental Lab Association, during the last three years the percentage of restorations produced offshore has dropped 4.5 percent, down to 30 percent of U.S. sales (mostly in the crown and bridge market). Local lab owners appealed to the college to keep its program and pledged to raise wages for graduates. 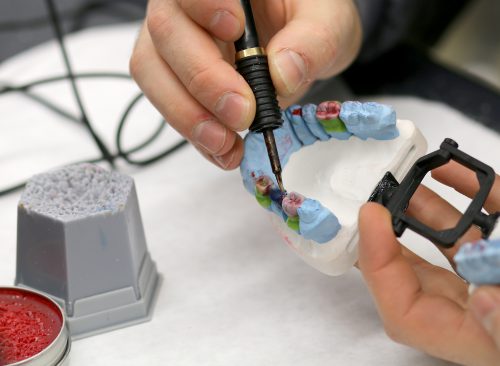 PCC helps makes its dental tech program accessible by offering classes between 8 a.m. and 5 p.m. for first-year students, and the late afternoon and evening hours for second-year students.

Homayoun Louie, second-year instructor and faculty department chair, said lab owners have kept their commitment and PCC graduates now start at $12-$14 an hour. Although that salary is still less than what is considered by many to be a living wage, Louie said that many dental lab technicians go on to become managers or start their own labs and earn significantly more.

“A great number dental lab technicians ultimately become lab owners,” he said. “I would say that at least 60-70 percent of the lab owners in town are graduates of PCC.”

In addition, the ADA says lab techs can also apply their skills in research, sales or marketing. Those long-range options are another reason that Boswell decided to enroll in the program. His research into the dental tech field convinced him that not only could he rise in the industry, but he also saw that people at the top of the business were both creative and played hands-on roles.

“I did feel like salaries were kind of an issue, but I felt like there was somewhere to go,” Boswell said. “Especially with my experience with mold-making and ceramics, I felt like I could get into some of the higher-paying positions.”

Technological advances – especially computer imaging – have also had a big impact on the industry.

“For a long time there really weren’t that many changes in the industry as a whole,” said Louie. “But in the last few years, with the introduction of the CAD/CAM and digital restorations, a rapid transformation is taking place in our industry.”

As a result, PCC students have had to go to OHSU to use its CAD/CAM equipment. However, OHSU’s computers are clinical models and not designed specifically for laboratory work. Louie said that’s why as part of PCC’s commitment to renewing its lab program, it is working to modernize its equipment and applying for a grant from the PCC Foundation to buy 24 CAD/CAM stations.

The program is updating its curriculum and last year started an internship for second-year students. Louie said that the college now has contracts with several laboratories in town to take PCC interns. 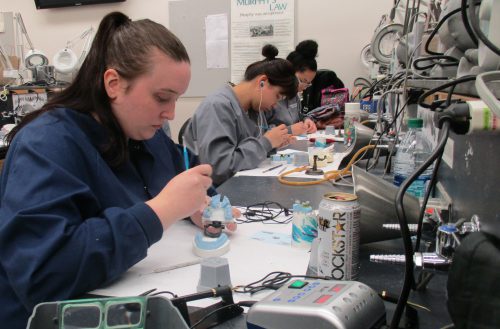 Boswell is excited about completing the second year of his associate degree, and said that it’s been a good fit for him.

“I felt that (the curriculum) came really naturally to me, but I was also really excited about every new process we learned,” he said. “And I also have some metal detailing experience, so once we started casting metal and finishing it and refining it, that was really fun for me as well.

“The biggest challenge was transitioning to a single object of such small scale,” he added. “It definitely can be tough on the eyes. But the perfection of it I enjoy, because I do a lot of that where I think, ‘Wow, this is just such a perfect little object and I’ve got to have all the little corners correct.’ I feel that works with my personality.”

PCC helps makes its Dental Laboratory Technology Program accessible by offering classes between 8 a.m. and 5 p.m. for first-year students, and the late afternoon and evening hours for second-year students. This schedule allows advanced students to work in entry-level positions part-time while going to school. Students also have the advantage of working with practicing dental technicians in the advanced lab classes, which are held in the evenings.

The college is also considering creating a one-year certificate for students who just want to make removable prostheses, such as dentures, instead of taking the full two-year curriculum.