This content was published: August 15, 2016. Phone numbers, email addresses, and other information may have changed. 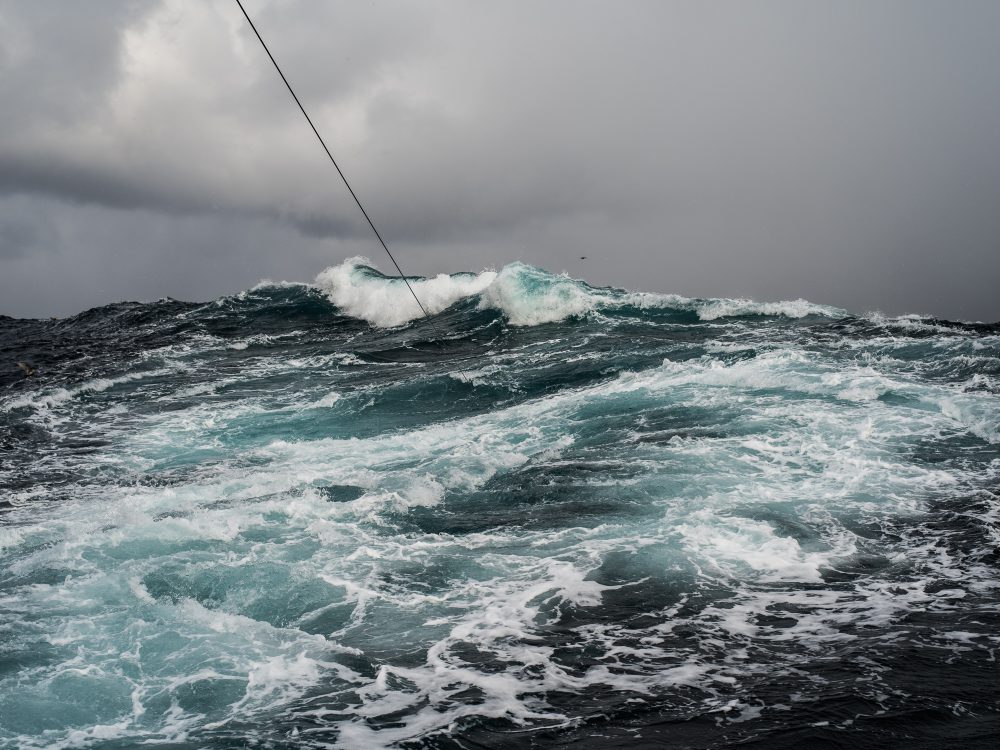 Corey Arnold’s “Headrope,” a photograph purchased by Rock Creek Campus, captures a fishnet rope amid stormy seas. Arnold is a fisherman and photographer based in Portland.

A flock of glass swifts soar gracefully overhead in the Student Commons at Portland Community College’s Southeast Campus. At the college’s Newberg Center, glass panels feature a seven-foot-high photo of a prized local orchard. And at Cascade, charcoal renderings of the Four Horsemen of the Apocalypse are a brooding presence in the new academic building.

PCC is using these and other installations as a powerful tool to challenge and inspire students, as well as to spread work to local artists.

Since voters approved the 2008 bond measure, the college has earmarked nearly $850,000 to purchase existing art and new commissions for three of its campuses and one center.

This closely resembles the statewide program known as “One Percent for Art in Public Buildings.” Cities and counties throughout Oregon are required to use one percent of their direct construction funds on projects of $100,000 or more to acquire and display permanent art (not performance or temporary pieces).

University of Oregon, Oregon State and Portland State University are covered by the mandate, while community colleges are not. Twenty-seven other states plus the District of Columbia and the territory of Guam have similar programs, although many of them include their community colleges.

However, PCC voluntarily created its own art acquisitions program and administers it independently. A few of the state’s other community colleges, such as Central Oregon and Umpqua, also have devoted capital construction funds to art purchases. 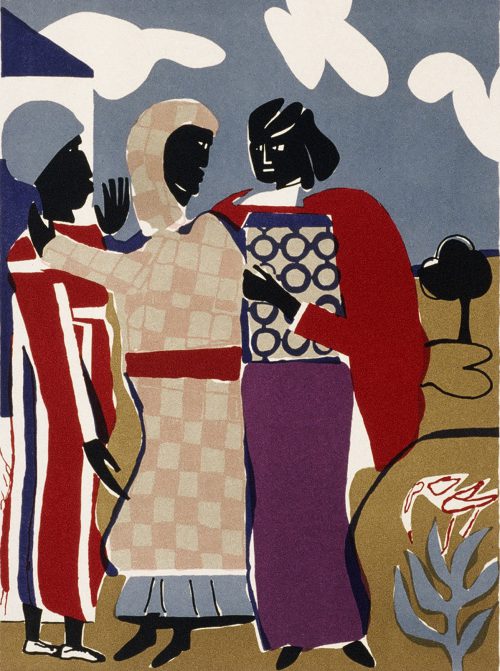 “As the state’s largest post-secondary institution, PCC has an important role in advancing the arts through education,” said Linda Degman, director of the college’s Bond Program. “Committing a percentage for art not only supports our curriculum, it also provides income for working artists and enhances our campuses and communities. It’s just the right thing to do.”

The money available for art at each location (Cascade, Rock Creek, Southeast and Newberg) depended on how much it received from the bond for new construction. At the Sylvania Campus, bond work has been limited to remodeling projects, so no percentage-for-art program exists there.

“PCC’s commitment to dedicate a percentage of building dollars to artwork on its campuses demonstrates the college’s active role in the creative ecology of Oregon,” said Atiyeh. “At its best, artwork serves as a lens through which we understand and interrogate the world around us. This is so critical, especially in educational settings. College campuses are one of my favorite venues to place works, as the piece can be located in a particular environment but is also one part of a collection that students, staff and faculty will form a relationship with. Over time, that collection will build its own aesthetic and historical narrative.”

To help ensure PCC’s various collections reflect the unique character of each campus or center, as well as their neighborhoods, each campus created its own art committee to procure submissions and make selections. The committees functioned independently and strove to include not just members with art backgrounds, but also students, administration, facilities staff, and, in some cases, instructors from the sciences and humanities. The committees also received input from the architecture firms that designed the new construction projects, many of which included spaces for displaying art.

The requests for proposals (RFP) were distributed extensively across the Northwest, but some campuses received submissions from artists as far away as Boston and Los Angeles. The art committees, however, prioritized choosing work from local artists, in part because the college’s mission for the bond includes spreading the economic opportunities throughout the community. Some locations, such as Southeast and Newberg, even focused on artists who live in the immediate area.

Because the Newberg Center is a new facility, and Southeast just became a comprehensive campus in 2014, they had little or no existing art, which gave their committees an opportunity to build their collections from the ground up. 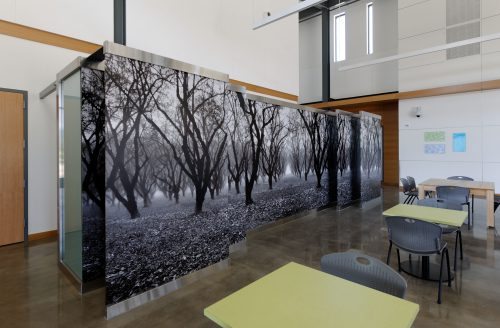 “A Sacred Place,” featuring an orchard near Dayton, Oregon, was made by fine-art photographer Marilyn Affolter. The large glass panels camouflage a row of vending machines in Newberg Center’s foyer.

At Newberg, the new building was designed as a net-zero facility, meaning that it has a neutral impact on the environment, earning it LEED Platinum certification. The art committee’s RFP stated that submissions should reflect this commitment to sustainability. As a result, the final 20 selections all have a nature theme, such as Carmen Reynolds’ fused-glass triptych featuring the leaves of native plants, or Kathleen Jones’ oil painting of birch trees.

One of the pieces is also functional: “A Sacred Place,” by local artist Marilyn Affolter, features an evocative black-and-white orchard photo mounted on large glass panels that camouflage a row of vending machines in the foyer. Newberg Center is not a very large building, so this enabled greater space utilization.

At the Southeast Campus there was an emphasis on the diversity of the local community. Christine Egan, former community relations manager for Southeast and the facilitator of its art committee, said a primary goal was choosing pieces that help “tell a story about the area” and celebrate the many different immigrant groups that live there. Instead of evaluating submissions strictly on artistic ability and aesthetics, the committee judged whether an installation would resonate with students and “was something the community could relate to and fit our campus,” she said.

The result is an eclectic collection of 14 pieces. The campus’ signature artwork is a nine-foot-tall steel sculpture of a seated woman reading a book, created by Julian Voss-Andreae, a local German immigrant, and modeled on a Filipino student at the campus. Another piece, a large mosaic by Mark Brody entitled “Portland Vitrified,” was selected because it met another one of the committee’s goals of combining “science with beauty.” The mosaic depicts the city of Portland and its major topographical features, and is mounted near a geology classroom.

At the Cascade Campus, bond funds have been used to purchase more than 60 pieces for two new buildings. While the majority of them are paintings, there are also a few sculptures and baskets, as well as work done in tile or textiles. 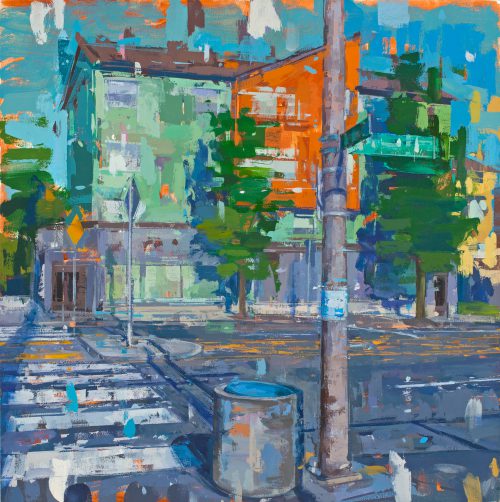 Like at other PCC campuses, the committee favored Northwest artists and looked for work that would resonate with students and the surrounding community. One piece, Baba Waque Diakite’s four-foot tile mural “In the Beginning Migration,” was selected in part because its animal theme would relate to the children at Cascade Hall’s daycare center.

Others include an oil painting by Nora Lehmann, called “Going Street & MLK,” which vibrantly depicts the campus’ adjacent commercial district, and Kristin Pesola’s hand-woven wall hanging titled “Emergence.” The latter was selected for a quiet study space because of its serene colors, its pine, linen and silk material, and the way it flutters subtly in the breeze.

Rock Creek’s art committee had a different challenge than those at the other three locations. Prior to the 2008 bond, the campus already had a strong teaching collection that was used to support its extensive curriculum. Art history instructor Prudence Roberts, who is also director of the campus’ Helzer Art Gallery, facilitated the campus’ art committee, and said it used its bond funds to strengthen mediums that were underrepresented in the collection, mostly drawings, photography, ceramics and prints. In all, the committee bought more than 40 existing pieces.

The committee also wanted all of the art to be portable so that the college can periodically rotate them to different locations around campus or put them in temporary storage.

Because Rock Creek relies heavily on the collection for teaching, the committee sought to include some preliminary studies and drawings that illustrate the creative process.

“We also looked for work from artists who really pushed their media,” said Roberts. “We wanted to avoid what the committee called ‘bland corporate art.’ ”

One Rock Creek addition is “Three Women (Easter Sunday),” a bold color lithograph that was done in 1978 by the late artist Romare Bearden, who often depicted African-American life. Meanwhile, “Headrope,” a fine-art photograph by Portland commercial fisherman Corey Arnold, captured a close-up of a taut line from a fishing net cutting through stormy seas.

Collegewide, all of the bond art acquisitions have been selected and most have been hung or installed. Facilitators of the various committees acknowledged that the selection process was both challenging and rewarding.

“People are strongly opinionated about what they like and don’t like, and it’s so subjective,” said Cascade Bond Facilities Manager Rebecca Ocken. “So there was a lot of facilitation that went on, and at times we just had to go with the majority vote to make sure we got what the campus needed.” 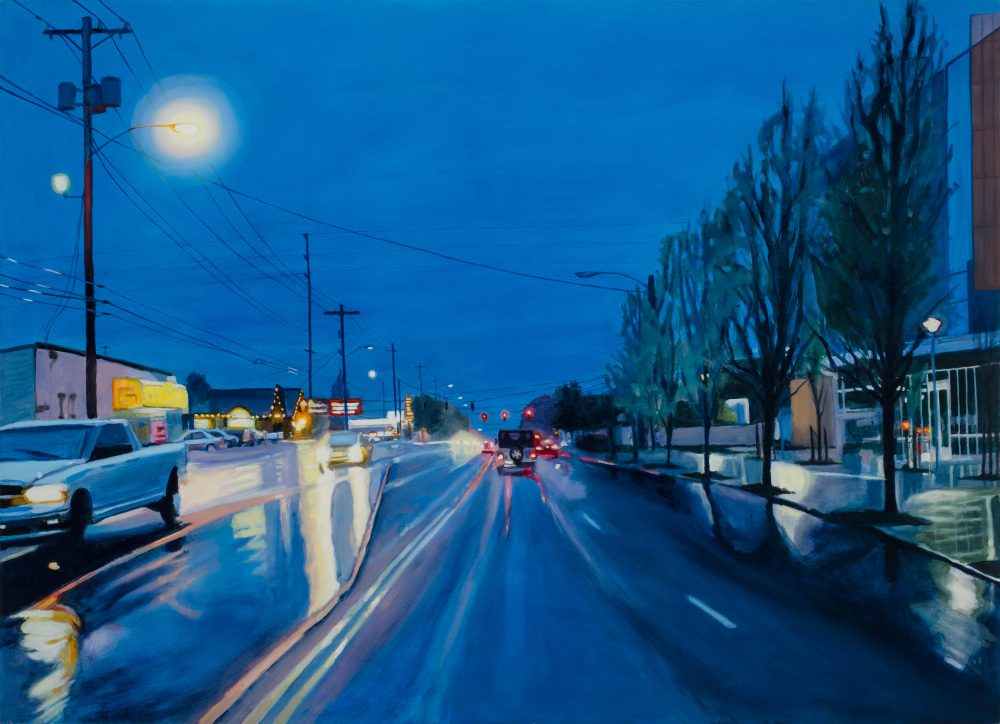 “Adjacent,” a painting by local artist Shawn Demarest, is part of a triptych that illustrates street scenes bordering PCC Southeast. The three paintings hang in the campus’ new library.

x by Linda Browning 6 years ago

I am wondering why there is so much beautiful art at other campuses, and almost none at Sylvania? I understand about the One Percent for Art not applying to Sylvania, but aren’t there other ways to procure art for the main campus?

x by Robin Burwell 6 years ago

I love that PCC is acquiring art but this does not replace Art Beat. Showcasing art in all its forms at all campuses once a year is a real commitment to art education.

The artist chosen to present is much appreciated…the familiar scenes welcome those who think outside of the box.

x by Kathleen Dodd 6 years ago

We just went on a field trip and saw “headrope” at a gallery downtown! Rachel Siegels Photography class.

I love the fact that we DO have displays (by student and other), on our Southeast campus. I see sculpture, painting, photographs, drawings, pottery, and other mediums, on our walls, and in our showcases, as well as hanging (our glass birds). It allows me to see the many talents our students and faculty (as well as others in our area) have, that I do NOT! I haven’t had a chance to get to the Art Museum in many years, and this brings it TO the local community, and a more accessible way.