This content was published: April 4, 2016. Phone numbers, email addresses, and other information may have changed.

Sylvania Campus Veteran Resource Specialist Kimberly Douthit has been named to the advisory committee for the Oregon Department of Veterans’ Affairs (ODVA) for a two-year appointment.

The committee is a group of nine military veterans who have been appointed by Governor Kate Brown to provide counsel to the ODVA director on all veterans’ issues and concerns in the state. 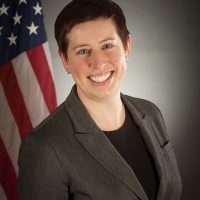 “I was really flattered when they reached out to me to think about requesting an appointment,” Douthit said. “To be recognized for the work that I’ve been doing in Oregon is a great feeling. The committee is very interested in being an active force for change.”

Douthit spent three years in the Coast Guard and is a Navy family member. Before joining PCC to start the Veteran’s Resource Center, Douthit worked at the Oregon Department of Veterans’ Affairs and for Washington County Veterans Services.

“Kim’s dedication to our student veterans is evident in numerous ways, both on campus and beyond,” said Sylvania Division Dean of Student Support Karen Paez said. “Her service on the Advisory Committee to the ODVA is an incredible indicator of her commitment to promoting positive change at a systemic level. This type of involvement at a state level, coupled with her many efforts on campus to create an inclusive environment that promotes the holistic success of our student veterans, illustrate the powerful leader and advocate that Kim is for Portland Community College.”

At Sylvania, Douthit oversees the operation of the Veteran’s Resource Center where veterans can receive assistance with obtaining resources from the county, state and federal government, have access to computer workstations and printers, work study opportunities and a safe place to discuss confidential matters without judgement.

x by Steve Gordon 6 years ago

Yaay, Kim! They definitely made the right choice! It will be so helpful for the Advisory Committee to have your input…you obviously understand the issues faced by student veterans and are passionate about improving the experience of veterans at PCC. Congratulations!

x by Lydia 6 years ago

x by Max Macias 6 years ago