This content was published: October 8, 2015. Phone numbers, email addresses, and other information may have changed.

Sharon Wood Wortman waited. For a long time. But it would be worth it.

What she was waiting for was a bridge. Not just any bridge, but the largest and longest car-free transit bridge in the United States. Tilikum Crossing, which opened Sept. 12, is Portland’s newest. Spanning the Willamette River between the Marquam and Ross Island bridges, the city’s first cable-stayed bridge carries only light rail trains, buses, streetcars, cyclists and pedestrians. 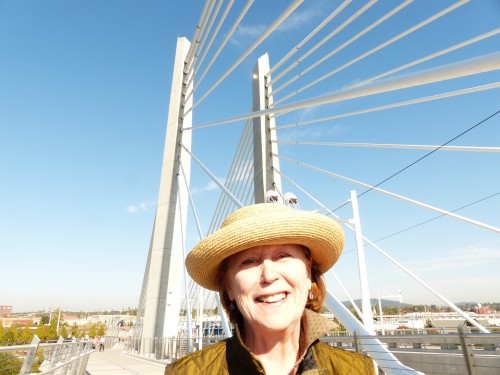 But what Wortman was really waiting for was to include Tilikum Crossing in her newest book, “The Big and Awesome Bridges of Portland and Vancouver, A Book for Young Readers and Their Teachers.” A full-color, 240-page hardcover covering the 22 big river railroad and roadway bridges between Vancouver and Oregon City, the book is a resource for third and fourth graders and teachers interested in science and engineering.

Wortman is Portland’s “Bridge Lady,” and was for more than two decades before she retired, at least from that gig, in 2010, to work on “Big & Awesome.” Author of “The Portland Bridge Book,” leader of bridge walking tours, poet, and teacher of bridge building classes, Wortman decided to act on an idea she’d had for some time.

Once the design for Tilikum Crossing was chosen, Wortman along with her co-author and husband Ed, a Multnomah County bridge engineer, was up and running. And she ran right into PCC.

“I was afraid the book wasn’t going to happen,” she said. “But then Cece appeared, and after I saw the first drawings from her students, I broke into tears of happiness.” 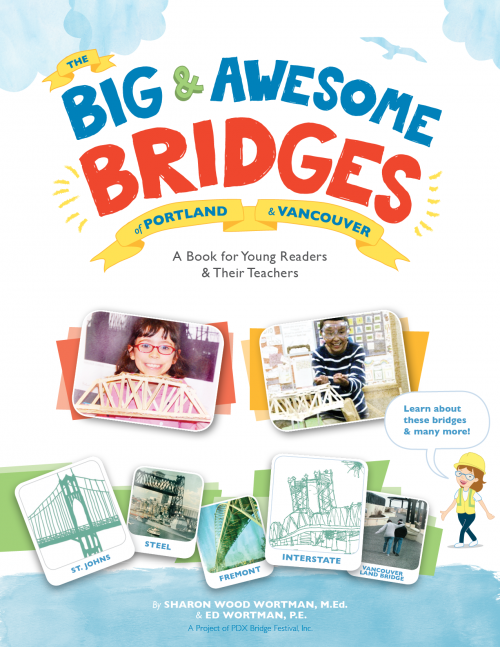 Though 155 artists, essayists, poets and others allowed Wortman to use their work, it was PCC students who brought the book to life. Their drawings, infographics, page designs and color choices gave the book a consistent feel and its colorful look. But the crucial element, the cartoon caricature “Bridge Lady” who guides readers throughout the book with facts and useful tips, makes the pages pop.

“The actual work on the initial pages was done in the classroom, but the book gave students real-world skills,” said Cutsforth. “Their work produced something tangible, and it has gotten them jobs.”

After graduating, five of the graphic designers continued to work together as a team for another year to finish the book. The six included Madeline DeCotes, Brandon Hafer, Shalin Mayher, Yuko Ohnuma-Oyler and Dean Williams.

PCC has other, deeper influences in Wortman’s life. She says her book publishing efforts and even the founding of her book publishing company, Urban Adventure Press, grew out of her early experiences as a student here. In 2004, Wortman enrolled in the “Advanced Creative Writing – Editing and Publishing” class with instructor Michael McDowell, who helped her learn the basics of her craft.

“’Big and Awesome’ stands on the shoulders of many people, particularly those at PCC,” said Wortman. “They showed up and helped me to cross the bridge of what’s called life.”

PCC was involved to the very end of the project with the book launch party being held at PCC’s Southeast Campus.

“Can I tell you how much PCC is embedded in that book?” said Wortman.

How to Find ‘Big and Awesome’

The book sells at Powell’s Bookstore and other area book outlets for $50 (book) and $10 (poster). Teachers, schools and libraries receive a 20 percent discount when buying directly from PDX Bridge Festival, Inc. For more information about the discount, or how to donate to PDXBF so that a needy school or library can own a book, email Sharon Wortman at bridgestories@icloud.com.