This content was published: October 27, 2015. Phone numbers, email addresses, and other information may have changed.

Even though leaves are falling and weather is getting colder but things are heating up at the Cascade Campus. 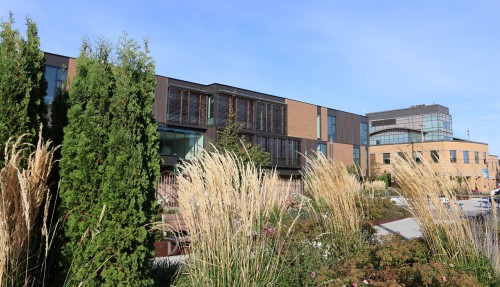 The campus, which is PCC’s bike commuting capital, began as an educational institution in 1918 as Cascade College, a bible school. It grew to become a four-year liberal arts college, before collapsing under debt in 1969 after expanding too fast. PCC took over and opened the Cascade Center in 1970 with 400 students enrolled.

Today, the full comprehensive campus, with more than 23,500 students, has become a focal point for job training, college transfer credit and self-improvement courses. If you stroll the campus you’ll see lots of construction, including the site of the old Student Center.

Now, events and programs are kicking in for the year including a special one this week. On Thursday, Oct. 29, PCC will honor its student veterans at a special open house from noon to 2 p.m. showcasing the VetSuccess on Campus (VSOC) program, an effort by the U.S. Dept. of Veterans Affairs (VA) to support veterans in their studies.

PCC’s basketball teams tipoff in November, playing mostly at Cascade’s gym, which will soon be renamed in honor of the late PCC Board Member and college athletics booster Harold Williams. Stay close to all of the action by checking in on the teams’ webpage.

And in the winter, the campus hosts its signature event called the Cascade Festival of African Films. Organizers are planning all of the films and festivities for February.