This content was published: October 21, 2015. Phone numbers, email addresses, and other information may have changed. 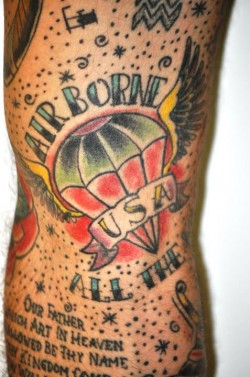 Special exhibits will include “War Ink,” a surprisingly intimate collection of photographs of service members’ tattoos.

For many veterans of the U.S. Armed Forces, community college is an important step in the transition back into civilian society after a tour of duty.

On Oct. 29, Portland Community College will honor its student veterans at a special open house showcasing the VetSuccess on Campus (VSOC) program, an effort by the U.S. Dept. of Veterans Affairs (VA) to support veterans in their studies. The open house will run from noon to 2 p.m. in the Student Union Building at the Cascade Campus, 705 N. Killingsworth St.

“VSOC is a great partnership between the VA and PCC to ensure that student veterans and their dependents receive all the benefits and resources available to them,” said Steven Gordon, a campus counselor with the VetSuccess on Campus Program and the organizer of the open house. “We are often able to connect students with benefits that they don’t know they’re entitled to. It has been a win-win for all involved.”

Through VSOC, the VA places experienced vocational rehabilitation counselors on college campuses to aid student veterans with the transition back into civilian life, whether it’s by connecting them with existing student support services or helping them cope with any lingering physical and psychological effects of their time in uniform. PCC is one of 94 colleges around the country with VSOC offices, and one of only two in the state of Oregon.

Special exhibits will include “War Ink,” a surprisingly intimate collection of photographs of service members’ tattoos; as well as the “Remembrance Rug,” a handmade tapestry composed of more than 9,000 symbols, each of which represents a specific person. None of the people memorialized on the Remembrance Rug are included in any existing war monuments or memorials.

The open house gets under way at noon. on Oct. 29; formal remarks begin at 12:30 p.m. Light refreshments will be served.

x by Steve Gordon 7 years ago

We’re trying to gauge who would be interested in meeting to discuss issues that are important to Student Veterans at Cascade (and Southeast campus).

If interested in supporting Student Veterans in and out of the classroom please contact me at my PCC webpage: http://www.pcc.edu/vetsuccess