This content was published: August 24, 2015. Phone numbers, email addresses, and other information may have changed.

Christa Fink runs with a pretty a wild crowd. A recent graduate of Portland Community College’s Biology and Management of Zoo Animals Program (BMZA), Fink works as a zookeeper in the North American exhibit of the Oregon Zoo and spends her days kicking it with cougars, bobcats, black bears, otters—and even a mountain goat named Montane.

In the North American exhibit, Fink works closely with two very special members of the zoo: two cougars named Chinook and Paiute. It’s apt that a PCC Panther (the college’s official mascot) like Fink spends a fair amount of her time caring for big cats. 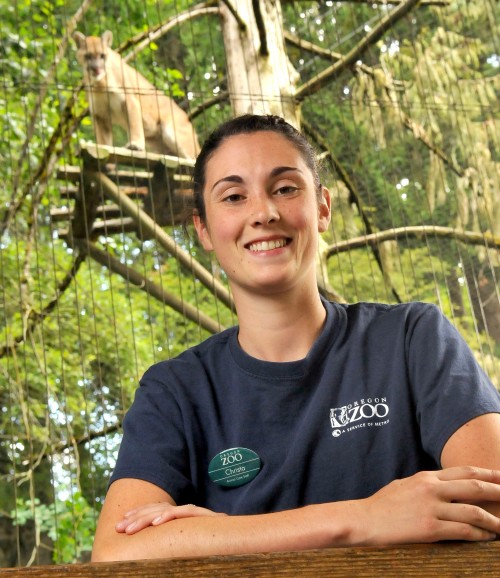 ‘When I saw that PCC had a biology and zoo management program I knew I had found the right place for me,’ said Christa Fink.

“Panthers and cougars have a lot of similarities, but they have some important differences. Cougars, for instance, fall into the Puma genus which is a group of big cats that are unable to roar,” said Fink. “Panthers are members of the Panthera genus—and they can make some serious noise!”

Fink always knew that she loved animals, but it wasn’t until recently that she realized she could transform this passion into a career.

After graduating with her bachelor’s degree in general science from Western Oregon University in 2012, Fink was having a hard time distinguishing herself while applying for jobs. She realized she needed more education to increase her chances of finding a good job. A friend in a similar position had recently applied to study at a learning zoo in California, where students interested in specializing in zoological management and animal training could work directly with animals. This sounded like a perfect fit, so Fink started researching similar options in Oregon.

“When I saw that PCC had a biology and zoo management (BMZA) program, I knew I had found the right place for me,” Fink said. “PCC is right in my back yard, and I knew I’d get to intern at my favorite zoo.”

The BMZA Program is the only one of its kind in the state of Oregon. It has been recognized as an official learning partner of the Association of Zoos and Aquariums—a designation reserved for only 15 organizations in the country, only four of which are colleges/universities. PCC is the only community college in the nation to be an official AZA learning partner.

Students gain real-world experience working with partner zoos and wildlife centers all over the world. All students in the program spend one full year, beginning in their second term of the program, doing rotations two days per week at the Oregon Zoo. Before they graduate, students must also complete a final full-time work experience internship with one of the program’s regional, national, or international partners (including conservation centers in China and Namibia, to name a few).

All BMZA classes are centered on hands-on learning. Fink recalled a particularly memorable day in class when she and her classmates practiced administering anesthesia on moving animals out in the barn on the Rock Creek campus. 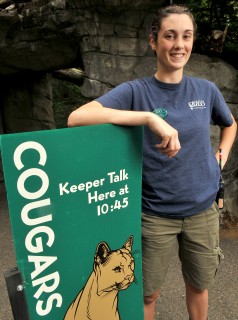 During her second term in the Biology and Management of Zoo Animals Program, Fink began her work rotation with the Oregon Zoo, overseeing lions, cheetahs, wild dogs, dwarf mongoose and more.

“Terry Lookabill who runs the farm there put a picture of a cheetah on a hay bale and put it on a wheeled cart,” Fink said. “As it went by us, we had to shoot a blow dart into the hay bale. I was one of the only people to hit it where you wanted the dart to land, so that was a day that I thought, if I can do this, I can be a zookeeper.”

The BMZA program is able to offer its unique coursework thanks to collaborations with other facilities and staff on the Rock Creek Campus, according to Joyce Kaplan, faculty department chair.

“We are able to share areas of the campus and staff expertise dedicated to building construction, veterinary and landscape technology, and environmental studies,” Kaplan said. “This assures that all of our students gain skills in areas which would allow them to repair a big cat’s enclosure, participate in its health care, keep it away from toxic plants, and protect its habitat in the wild!”

During her second term in the program, Fink began her work rotation with the Oregon Zoo. She worked with lions, cheetahs, wild dogs, dwarf mongoose, polar bears, sun bears as well as turtles, rabbits, and hedgehogs. Thankfully, none of these experiences required her to put her blow darting skills to use.

Her last rotation was in the North American animal exhibit. After completing her coursework and gaining even more experience working with big cats as a fulltime intern for Wildcat Haven (a nonprofit, no-kill sanctuary located in Sherwood, Ore.) Fink returned to the Oregon Zoo and was hired as a temporary zookeeper.

The best moments for Fink come when she’s working directly with the animals.

“As you get to know their personalities, you see that they’re all so unique. One trick will work great for some animals, and won’t work at all for others,” she said. “That’s the kind of stuff that you just can’t learn from a textbook.”