This content was published: August 26, 2015. Phone numbers, email addresses, and other information may have changed.

If you’ve set foot on Portland Community College’s Cascade Campus lately, you may have noticed something different. No, not the new buildings, nor the demolition and renovation projects currently under way. It’s something else – PCC’s Public Safety officers are on bikes.

Four Public Safety officers at Cascade made the switch from foot patrol to “mounted” bike patrol this summer. Thus far, the response has been overwhelmingly positive.

“It’s been great,” said Officer Lyle Brown of the transition from patrol cars to bikes. “So many more people feel they can approach us now. I think we’re much less intimidating when we’re not in our cars. We’re just some guys on our bikes.” 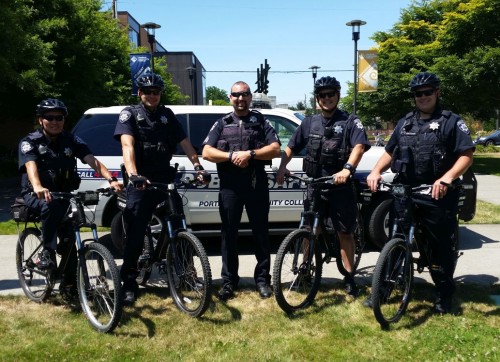 The decision to make the switch to a bike-mounted patrol was much more proactive than reactive, said Sgt. Erik Hargrove, head of the campus’ Public Safety detachment.

“It wasn’t a response function,” Hargrove said, “it was more of a community engagement decision. We wanted to be more visible and approachable, and it’s worked out really well thus far.”

To date, Hargrove said his bike team had amassed a total of 235 combined miles, logged 233 “positive contacts” with people at Cascade, and taken part in 85 “assists,” meaning that they had successfully answered a question or helped someone solve a problem. Hargrove said these typically range from needing directions to a campus location to needing help with car trouble.

Hargrove said the impetus of forming a bike-based patrol at Cascade came from one of his colleagues, Officer Tony Whitmore, who thought that it was the perfect fit with the campus’ bike-friendly culture and flat topography. Cycling flourishes at Cascade, which boasts the highest proportion of bicycle commuters – among students, faculty, and staff – in the PCC district.

“Given the layout and terrain at Cascade, bikes are really efficient for moving around campus,” Hargrove explained. “And they make us a more integrated part of the community. People immediately see the value of having officers on bikes.”

“We’re always looking for ways to help our officers to do their jobs more quickly and more effectively,” Goodwin said. “In the case of the Cascade bike team, this is an innovation that makes them both more mobile and more approachable. It’s a really positive change, and I hope to see more bike-mounted officers around the college.”

Hargrove and his fellow officers researched best practices at other educational institutions and law enforcement jurisdictions looking for models of what would become the Cascade bike team. One of their subjects, the Beaverton Police Department’s bike-based patrol, not only offered the PCC officers advice, but loaned them four fully-outfitted bicycles and provided four PCC Public Safety officers with 16 hours of training at no cost.

“We’re really grateful to Beaverton for their interest and support,” Hargrove said. “We literally would not be where we are today (with the Cascade bike team) without them.”

For the time being, Hargrove said the Cascade bike team will continue to wear their traditional PCC Public Safety uniforms, but he and his colleagues are in the process of developing a special high-visibility uniform for the mounted officers. Each officer has been issued their own helmet, provided by PCC’s Safety & Risk office.

Hargrove said that there is interest in expanding the bike patrol model to PCC’s other campuses and centers, and that he and his colleagues are working on revamping the college’s policy to facilitate this. PCC’s Public Safety has had a bike patrol policy since the late 1990s, but it hasn’t seen much use over the years, he said. Given the bike patrol’s obvious advantages – Public Safety’s fuel expenditures at Cascade are down by roughly 50 percent since the patrol was started – Hargrove expects the rest of PCC to follow suit sooner rather than later.

“It’s a financially and environmentally sustainable policy and is definitely in line with PCC’s values,” he said. “It also promotes employee wellness by offering the chance for on-the-job fitness.”

Hargrove said the next step is further training for his officers, which they will receive via a class at Portland State University in September. Then it’s a question of acquiring new bicycles for the Cascade patrol (their current bikes will eventually need to be returned to the Beaverton Police), and outfitting his officers for the winter months. He hopes to obtain grant funds to sustain the Cascade patrol and, hopefully, help it grow throughout the rest of PCC.

“We plan to be out there, rain or shine,” he said. “If our students can ride through the winter, so can we.”