This content was published: May 12, 2015. Phone numbers, email addresses, and other information may have changed.

Portland Community College’s Newberg Center, situated at the head of the lush and verdant Dundee Hills where some of Oregon’s best wine grapes are grown, is growing a garden of its own. This week, ground is being broken for an 11,00-square-foot Learning Garden on the campus of the four-year old center.

Designed by Seed Garden Designs of Portland, and driven by student leadership at the center, the garden will be a living lab for students as well as members of the community. 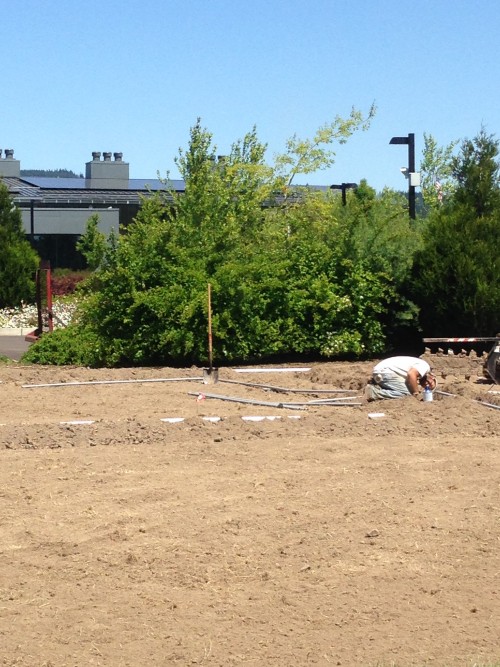 Like the Learning Gardens at the Rock Creek and Sylvania campuses, Newberg’s garden will provide a variety of learning opportunities.

Lynn Montoya-Quinn, director of the Newberg Center, said the garden design not only includes plots for neighbors, but also gives a nod to Newberg’s horticultural heritage.

“Once the infrastructure is complete and planting begins, we’ll showcase plants that highlight the best of Newberg,” said Montoya-Quinn. “This includes camellias, which is Newberg’s city flower, and grape vines and hops, which are grown in abundance by local farmers for the microbreweries and wineries in our region.”

A point of pride for PCC is that one of the contractors for the job, Stacey Werner of Tryon Creek Landscaping, is a 1987 graduate of PCC’s Landscape Technology Program. Both Werner and his business partner Kevin Durrell took classes at PCC’s Rock Creek Campus. Werner’s crews are grading the land and digging electrical and irrigation lines, among other prep work.

The majority of the cost of the garden was covered by a grant from PCC’s Green Initiative Fund. The fund, derived from student activity fees collected across the district, provides for projects that reduce the college’s impact on the environment. The fund also allocates dollars for projects that increase the amount of renewable energy used on campus, increase energy efficiency, and reduce the amount of waste created.

The Newberg Center offers college transfer and career training courses to residents of Yamhill County and the surrounding communities. Nearly 600 students enroll at the center each term.

The center is sited on a 16-acre parcel that was purchased with funds from PCC’s 2008 voter-approved bond measure. The first building to be constructed on the site is a 12,000 square-foot educational center with five classrooms, a conference room and administrative space. The building is designed to be Net-Zero Carbon Neutral, meaning that on an annual basis, it produces as much energy as it uses. Built in 2011, it was the first net-zero higher education building in Oregon and the second in the United States. Its efficiency led to the center being awarded Platinum level LEED-NC certification, (Leadership in Energy and Environmental Design with a special focus on new construction.)