This content was published: March 23, 2015. Phone numbers, email addresses, and other information may have changed.

PCC hopes investment in Day at the Capitol returns dividends

For Portland Community College, March 12 was a day for some serious capitol investments.

Hundreds of staff, faculty, students and friends of Portland Community College participated in the 2015 PCC Day at the Capitol at the Oregon State Capitol Building in Salem. The annual event creates an opportunity for PCC to tell its deep and impactful story to local legislators. Dressed in colored PCC spirit t-shirts and holding college-branded swag, participants attended floor sessions in the house and senate, which included a performance by the Rock Creek Choir. In the Capitol Building’s galleria, MakerSpace, Aviation Science and Future Connect programs occupied tables to hand out gifts and showcase their offerings. Review the Storify recap of the day.

The positive messaging and activities had many college leaders impressed. 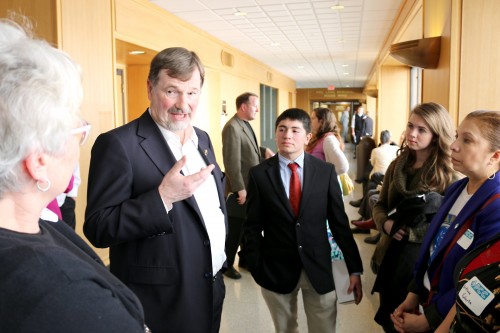 “Looking at our students, faculty, staff  and alumni, I can see no greater testament to the value of a PCC education and the impact that the college has had on the entire state of Oregon,” said Rob Wagner, associate vice president for College Advancement. “We are in the process today of engaging with our state leaders about the importance of post-secondary education and encouraging them to #thinkPCCfirst for a stronger Oregon.”

In the middle of the day, attendees traveled to the Salem Conference Center for the PCC Diamond Alumni Awards Luncheon. The five outstanding PCC alumni, Mitchell Jackson, Joshua Fegles, Barbara Gladue, Larry O’Dea and Carmen Thompson, were recognized with a crystal award and gave short speeches to the gathered crowd. Each year, PCC celebrates five alumni who exemplify what it means to be a “PCC Diamond” through their leadership, achievement and service to community. Since 1961, PCC has had nearly 1.4 million people come through its doors.

“Our alumni truly represent the backbone of Oregon’s economy in terms of their contributions,” said PCC President Jeremy Brown. “(The Diamond Award Alumni) are graduates who have exhibited the qualities that make PCC proud.”

The rest of the day centered on getting PCC’s message across to the elected senators and representatives. Groups of college staff, faculty, students and leaders visited their representatives and senators in their Capitol Building offices to discuss the importance of funding higher education. Currently, the state’s legislature is deciding on the funding level for Oregon’s 17 community colleges.

“I take some pleasure in asking people around the state, ‘What’s the most important institution of higher education in the state?’” said keynote luncheon speaker and Speaker Pro Tempore of the Oregon House Rep. Tobias Read (District 27-Beaverton). “Some people will say Portland State, or will say Oregon State, but the number of people who say PCC is rising, and that’s good. There are an increasing number of people who recognize the significance of what you are doing and the important, central role you play. You are the biggest, but you are also, I think, most important in helping people access the tools and the opportunities that are in front of them.”

x by News: 2015 Video Highlights: From Panther hijinx to graduation, this year’s list has it all | PCC 5 years ago