This content was published: February 26, 2014. Phone numbers, email addresses, and other information may have changed.

The longest-running annual African film festival in the United States is set to entertain and inform from Jan. 31 through March 1. The festival, which is free and open to the public, shows films ranging from full-length features to documentaries and short films. More than 5,000 people attend the festival annually. Each night’s screening is followed by a discussion led by individuals with expert knowledge of the region shown in that evening’s film. 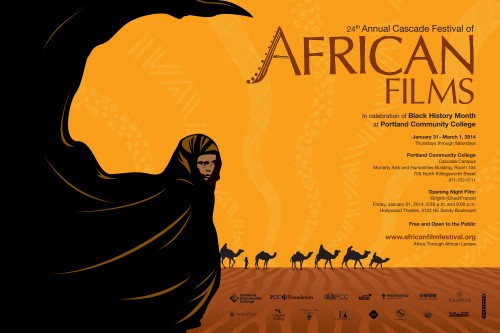 Poster for the 24th Cascade Festival of African Films.

“The films celebrate Africa’s achievements, expose Africa’s failures, and reveal the possibilities for change and a more hopeful future,” said Tara Foster, film festival coordinator. “They show us pictures of Africa through the eyes of Africans, rather than a vision of Africa that is packaged primarily for western viewers.”

All films will be shown in the Moriarty Arts and Humanities Building Auditorium, Cascade Campus (705 N. Killingsworth St.) with opening night festivities on Friday, Jan. 31 to be held at the Hollywood Theatre (4122 NE Sandy Blvd.). Feature films are on Friday and Saturday evenings (most features are also screened on Thursday afternoons) and documentaries are shown on Thursday evenings. Special matinees are to be held the afternoons of Saturday, Feb. 8 and Saturday, Feb. 22.

This year’s event is dedicated to the memory of South Africa’s first black democratically elected president Nelson Mandela, who died on Dec. 5. On Thursday, Feb. 20, the festival will screen “Dear Mandela” at 7 p.m. This documentary addresses Mandela’s “unbreakable promise,” an ambitious plan to ensure housing for all. In 2012, when their shantytowns are threatened with mass eviction, three young South African activists take their government to the highest court in the land, putting the promise of democracy to the test.

This year’s films cover a wide range of themes and topics.

Opening Night at Hollywood Theatre – On Friday, Jan. 31, the festival opens with “Grigris” at the Hollywood Theatre with screenings at 6:30 p.m. and 9 p.m. Directed by the highly acclaimed Chadian filmmaker Mahamat-Saleh Haroun, this 2013 film is about a young man who dreams of rising above his economic and physical impediments. Visually stunning and ultimately uplifting, this film is a thoughtful portrait of a war-ravaged country on the brink of change. 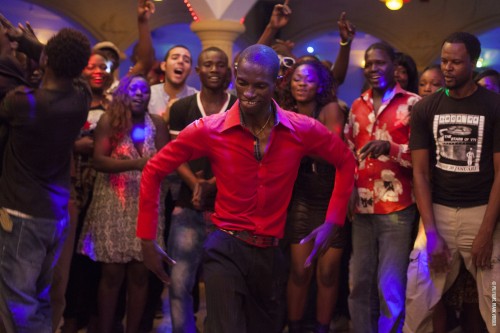 A scene from the opening night film ‘Grigris.’

Centerpiece Film & Director Visit – Nigerian director Obi Emelonye will introduce his high-octane airplane disaster thriller “Last Flight to Abuja” at noon, Thursday, Feb. 13 and 7 p.m., Friday, Feb. 14 in the Moriarty Auditorium. The film is considered part of the “new wave” in Nigerian cinema that aims to improve technical production of the “first wave” Nigerian films to appeal to a wider audience.

Sembene Retrospective Matinee with Amadou Fofana – Known as “The Father of African Cinema,” Ousmane Sembène is a widely studied director. From 1-4 p.m., Saturday, Feb. 8, Amadou Fofana, a professor of French at Willamette University and author of “The Films of Ousmane Sembène,” will host a Sembène retrospective. Two Sembène’s films, “Borom Sarret” and “Faat Kine,” are set to be screened and will be followed by discussions with Fofana.

Women Filmmakers Week & Director Visit – The Festival’s final week is always dedicated to films made by African women. Director Apolline Traoré, from Burkina Faso, will introduce her newest cinematic project, “Moi Zaphira!” at 7 p.m., Saturday, March 1 – closing night for the festival. This narrative shows how far a widow will go to achieve a better life for her daughter. In addition, there will be two North African social commentary films – Jehane Noujaim’s raw Egyptian documentary, “The Square,” (7 p.m., Thursday, Feb. 27) and Moroccan filmmaker Leila Kilani’s “On the Edge” (noon, Feb. 27).

x by Marjorie Kundiger 7 years ago

have enjoyed this for many years, really great that it is free for the years of limited cash. thanks for providing an interesting cultural experience

x by Aziza Kibamba 7 years ago

I ‘ m so glad for that. I believe that these movies will be a good opportunity to learn about African history.

x by Jesse Maes 7 years ago

x by Tihara Frazier 7 years ago

x by aphelele 7 years ago

thanks for this wonderful African month movies but some of this movies they show the old Africa things have been change to better and people they learn Africa as old way of this movies hope you get new movies so people they can see the real Africa. We do appreciate your effort.