This content was published: July 1, 2013. Phone numbers, email addresses, and other information may have changed.

Portland Community College instructor Harry Davis likes to have students come up with a molecule of the week for his chemistry class at the Sylvania Campus. But student Dave Coulter would take it a step further.

“I always tried to pick a molecule germane to astrophysics or something that was hot in the news of astrobiology,” Coulter said. “I would do watercolor paintings and write a brief description of context for the molecule.” 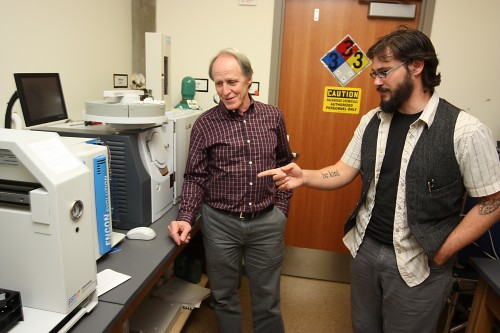 Chemistry instructor Harry Davis, who is on the left, said Dave Coulter is in his top-three of students he’s ever taught.

That small glimpse into Coulter’s intense love of molecules, and astrophysics, has led him to earning an Oregon NASA Space Grant Consortium (OSGC)-funded summer internship, plus a $7,000 scholarship, at Wallops Flight Facility in Virginia. The project is titled, “Mathematical Taxonomy for Ocean Phytoplankton,” which means he’ll be involved in a genetic programming effort – essentially taking models of phytoplankton ecosystems and evolving them using genetic programming techniques to create new and novel ecosystem models.

“It was a surprise to me,” said Coulter, who is transferring to Portland State University this fall. “But it’s going to be cool. I didn’t think I had a shot at it to tell you the truth. I thought maybe I just needed to do more academics and independent research at PSU first. I’m really pleased that I’ve been afforded such great opportunities at PCC and have had really good coursework here.”

Coulter is one of 14 students from across the state to participate in OSGC-funded NASA internships for summer 2013. Students are competitively selected by NASA scientists to participate and are chosen from thousands of students who have applied from across the country. John Moisan, NASA Researcher at the Wallops facility, chose Coulter for this project.

Coulter, 32, applied for a NASA internship in January and received notice he had earned this opportunity in April. He currently is gone for ten weeks through to mid-August. In October, he’ll present the work he was involved in at a NASA conference in Hawaii and at the Oregon NASA Space Grant Student Symposium, where all OSGC-funded students who participated in NASA internships will present their research projects.

“I feel so happy for Dave,” said Davis, who has worked for the college since 2006. “Of all of the more than thousands of students I have had in my teaching career, Dave is one of the top three students I’ve ever had. It’s just great to see Dave get that kind of recognition and it’s a nice thing for PCC.” 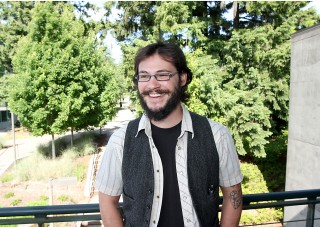 ‘I remember being on the beach and thinking I’m going insane,’ he said. ‘I thought I needed to do something with my life before I could enjoy it.’

Coulter wasn’t always destined to be a star in this field. In 2003, he earned a bachelor’s degree in world history from Lewis & Clark College, but really couldn’t find employment in any related field to his degree. He decided he needed to find himself. So Coulter sold all of his possessions except for his motorcycle and ventured on a trip around the world where he’d teach English and just ride around exotic locales. But in Costa Rica something kept nagging him.

“I remember being on the beach and thinking I’m going insane,” he said. “I thought I needed to do something with my life before I could enjoy it.”

He got married, but couldn’t find a steady job to support his family. He worked in three part-time jobs just to survive – tech support, handing out wine samples and bartending. That is until he did what any industrious young adult would do – teach himself computer programming. He soon found work as a programmer, which he has been doing ever since. The job as a programmer has been good, he said, but his true love, astrophysics, was something he wanted to explore. He decided to go back to school to major in physics and math with an eye on someday becoming an astronomer.

“I’m starting over again,” Coulter said. “I’m in the process of reinventing myself.”

About the National Space Grant Program: The program consists of 52 Space Grant consortia, one in each state plus DC and Puerto Rico. Funded by NASA and managed at the state level, each consortium designs programs to foster Science, Technology, Engineering, and Mathematics (STEM) and STEM education that address the needs that are specific to each state. The Oregon NASA Space Grant Consortium (OSGC) consists of 18 affiliates from around the state including four-year higher education institutions, community colleges, and informal educators.

x by Linda Browning 9 years ago

Congratulations, Dave! You found opportunities to pursue your passion. We are all proud of your accomplishments.

It shows the value of a great teacher and mentor. Congratulations to you too, Harry.

x by Jeanette DeCastro 9 years ago

I took Physics with David and am not at all surprised by his successes! Keep on working hard and generally rocking.

x by Lydia 9 years ago

Congratulations, neighbor!!! This sounds like a great adventure and you absolutely deserve it.

x by Tabitha 9 years ago

Dave, you are an inspiration. I myself am taking a shot at a second career and I am now a full-time PSU student (PCC alumni) entering my senior year in Environmental Studies. Your passion for learning and success is an inspiration. You have a unique skill set and you are being recognized for it. Best of luck to you!

I recently did a paper/presentation on “Oceanic Fertilization as a Means of Carbon Sequestration”. I explained how research has suggested that fertilization of the ocean through various means would increase Phytoplankton populations, which would then uptake CO2 from the atmosphere and cool the planet as the greenhouse gases were removed.

I was unaware at the time that Phytoplankton ecosystem models were scientifically evolving. Maybe the NASA team can come up with a successful plan to increase the likelihood that carbon will become a permanent part of the geologic record without contributing to ocean acidification and loss of marine biodiversity.

Then…maybe then, oceanic fertilization may be a probable solution to abrupt climate change.