This content was published: April 12, 2013. Phone numbers, email addresses, and other information may have changed.

The Oregon Veterinary Medical Association honored Dolores Galindo with its Veterinary Technician of the Year Award for her service to the veterinary profession and animals. This award recognizes a veterinary technician in clinical practice who has risen above and beyond the expected responsibilities of the practice to provide outstanding client and patient service, and community service. Dr. Randall Haveman of Sunnyside Veterinary Hospital and PCC Veterinary Technology Instructor Christina Tran nominated Galindo for this award. 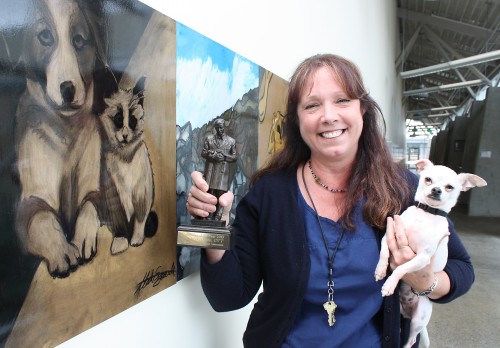 In 2012, Dolores Galindo also received the Woman of Distinction Award from PCC after being nominated by her students.

Galindo graduated from PCC’s Veterinary Technology Program in 1990. She spent several years in private practice before returning to the college as the lead technician for the program. In 2012, Galindo also received the Woman of Distinction Award from PCC after being nominated by her students.

“It is an understatement to say that Dolores is the lifeblood of the Vet Tech program,” stated the Oregon Veterinary Medical Association’s news release. “During her almost 20 years at PCC, she has been an integral part of the continuous refinement of the curricula and animal care. In her role, she has instructed and mentored hundreds of successful veterinary technician students. In addition to her duties as instructor, Dolores is an adviser for the Veterinary Technology Club, assists in labs taught by other instructors, coordinates the dog behavior training sessions, and oversees the student-run Pet Adoption Committee.”

Galindo works most weekends at Sunnyside Veterinary Hospital in Happy Valley. Alongside her former instructor Dr. Randall Haveman she continues to keep her technical skills fresh and pursues life-long learning. She currently serves as President-Elect for the Oregon Veterinary Technician and Assistant Association and served on the Oregon Veterinary Medical Examining Board from 2003 to 2011. Galindo was the first Certified Veterinary Technician on the board of the veterinary licensing agency, including one year as Chair of the Board.

“Ms. Galindo inspires others to reach their potential and keep animal welfare at the forefront. In short, she is the Gold Standard for Certified Veterinary Technicians,” continued the news release.

The Oregon Veterinary Medical Association is a non-profit organization of more than 1,000 veterinarians who are dedicated to helping people give their animals a high quality of life.

[…] very own Dolores Galindo (read her story) is the Oregon Veterinary Medical Association’s Veterinary Technician of the Year Award. She was […]