This content was published: June 27, 2011. Phone numbers, email addresses, and other information may have changed.

The inaugural Future Connect Scholarship Awards Ceremony attracted a big crowd to Portland’s City Hall on Tuesday, May 24. Scholars and their families as well as local dignitaries gathered in the City Council Chamber to honor the first class.

Mayor Sam Adams and Portland Community College Board Vice Chair Jim Harper awarded scholarships to graduating high school seniors who are at risk of not going to college, yet have high potential to succeed. Ninety-five percent of the first Future Connect scholars are first generation college students. With support from the City of Portland and donations to the PCC Foundation, 200 students will receive scholarship support and dedicated coaching to earn a degree at PCC. 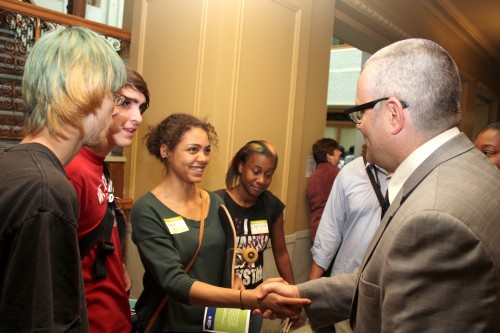 Students selected for Future Connect scholarships, which includes student support services and advising, got to meet Portland Mayor Sam Adams at the kick-off reception at City Hall on May 24.

The college and the PCC Foundation continue to work on raising money to match the city’s investment in order to fully fund the program.

“(My own family) didn’t always have the money we needed to get by,” said Mayor Adams, who told the students he watched one of his own siblings struggle in life after not graduating from high school. “I always wanted to get involved in government to help make it easier for smart and hard working kids to get to school in the face of rising costs at colleges, universities and skill programs.”

Besides monetary help, the students will get intensive advising and student support as they progress toward their educational goals. This includes having their own college success coach and tapping into career guidance services, job and internship resources and many enrichment activities.

“This kind of support is as important – if not more – to these students’ success than the scholarship,” said Kristin Watkins, Associate Vice President of College Advancement.

One of this year’s Future Connect scholarship recipients is 18-year-old Reilly Hunter, who recently graduated from Reynolds High School. Next fall he plans to enroll in PCC’s Nursing Program where he wants to build a foundation to transition to a four-year program and eventually earn his registered nurse license. Hunter heard about Future Connect via an information session held at his school. A couple of weeks before his graduation he got a letter in the mail telling him he was a Future Connect scholar.

“I said, ‘Holy crap I made it,’” Hunter said of his reaction. “It feels good because this is a big opportunity ahead of me that I have to take advantage of. This takes a lot of pressure off and I can focus on school rather than how I’m going to get money for school.” 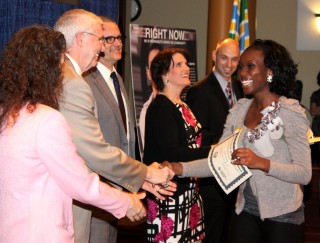 The scholars were honored at a ceremony in the City Council's chamber in downtown Portland.

Another student, Nina Chavez of the Youth Employment Institute, agreed with Hunter that the scholarship and the student support that comes with it will make a huge difference.

Mayor Adams said that the joint venture between the city, the PCC Foundation and the college will make sure future Portlanders are well educated and increase their access to those well-paying jobs that aren’t the first to be axed in an economic downturn. In turn, this will strengthen the city over the long run, he said.

“These scholarships are being presented in partnership with PCC, which is renowned throughout the nation as the best community college, bar none, with multiple campuses, all focused on one thing – your success,” he told the recipients.