This content was published: December 13, 2010. Phone numbers, email addresses, and other information may have changed.

A team from PCC’s gerontology department was chosen to present at an international conference on positive aging in Los Angeles on their collaborative work with the Spirit of ‘45 Project this past summer. The team is made up of students Cheryl Rogers-Tadevich, Jim Dalton and Paul Perry, and instructor Cat Zimmerman. The conference featured nearly 400 renowned global experts and community leaders analyzed how to ensure that older adults improve their quality of life as they age. 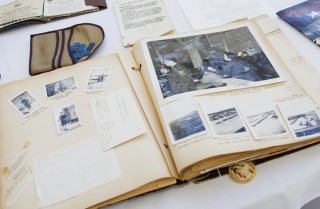 Photos, letters and scrapbooks were some of the personalized methods used by Spirit of ’45 participants to recall memories of where they were on Aug. 14, 1945.

“Keep the Spirit of ’45 Alive” was a national, public campaign (www.spiritof45.org) marking the 65th anniversary of the end of World War II during the weekend of Aug. 14. A Congressional Resolution was introduced in the House of Representatives in support of “Spirit of ’45 Day” to honor the legacy of that generation. The Spirit of ’45 project was co-sponsored by the college and offered a local perspective on a national undertaking.

“Just a few months ago these three talented, experienced, older adults were my ‘students,’ and now they’re my colleagues,” said Zimmerman. “I’m as proud as can be – and the opportunity for them to share their findings at the Positive Aging conference really closes the loop on how far they’ve come and what they’ve learned.”

To raise public awareness, communities across the country were invited to hold commemorative events to mark the occasion and collect first-hand memories of those who experienced Aug. 14, 1945; those events and experiences were posted to the national Spirit of ’45 website.

Upon learning of the national Spirit of ’45 project, Rogers-Tadevich, a recent PCC gerontology graduate, saw it as an opportunity to apply what she’d learned in the classroom.

She interviewed Anne Lane, director of the McMinnville Senior Center, and thought the center might be a good fit for a local version of the project. Next, she enlisted the help of Dalton, Perry and Zimmerman and student volunteers to seek support from a variety of community partners – PCC, City of McMinnville, Brookdale Senior Living – Villas at Wynwood, PosterGarden, Buglers Across America and the national Spirit of ‘45 organization – to get the project off the ground.

The kick-off took place in mid-June at the McMinnville Senior Center. The PCC team led local participants in a series of activities to capture their memories of that moment in time, often with help from family members to assist in documentation.

“The process of sharing their stories enabled participants to validate a huge part of their own lives,” said Rogers-Tadevich. “Many had never told their story about where they were on Aug 14, 1945. Adult children listened intently while their parents and grandparents told their history; for several of them, this was the first time they had heard these stories.”

To share their memories, participants used forms of expression that were personalized to them, such as photos, music and story-telling. The process fostered intergenerational connections, revealed the importance of capturing memories, and uncovered a piece of history that helped to shape lives and the country.

“The impact was quite profound,” said Lane, director of the McMinnville Senior Center. “I could see the demeanor of participants change; the pitch in their voice would change, up or down, depending on their personal experience. The way they sat in their chair changed, and the expression on their face changed as they recalled their story.

“It was amazing to see how an historical event of such significance could stay with someone and create an effect even 65 years later,” Lane added.

The final Spirit of ’45 presentation was unveiled Aug. 14 at McMinnville’s Evergreen Aviation and Space Museum. Public displays showcased the efforts of participants and those who assisted them; photos and news articles; items specific to McMinnville and surrounding areas covering the events of Aug. 14, 1945; and period music played by local bands.

“The biggest insight I gathered from this project was the need for ritual and ceremony to capture valuable history,” said Dalton, also a graduate of PCC’s gerontology program. “The event created a space for elders to share their stories, which helped make a distant point in time come alive for all of us: the PCC team, the elders themselves, and their family and friends.”

PCC’s Gerontology Program is designed for individuals who wish to develop careers in the field of aging, those already employed or active in gerontology or related fields.

Rock Creek gets with the bond plan, Classes, advising available in Columbia County, PCC loses another link to its past