This content was published: February 27, 2015. Phone numbers, email addresses, and other information may have changed. 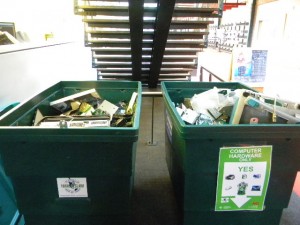 On Wednesday, February 25, 2015 in the CC mall, 20+ students, instructors, and staff smashed 234 hard drives & collected 152 other computer items for responsible eCycling!  That’s approximately 351 lbs. of hard drives that were saved from the waste stream & a whole lot of data that won’t be available for identity theft – what a rewarding two hours!

Thanks to the Engineering students’ machines that held up under their first real world test, and thanks for all of your help in advertising, supporting, and participating in this event.  Plans are in the works to continue our efforts during Earth Week and beyond. 🙂

On Saturday, October 25, 2014, twenty-five gamers came together from all over the Sylvania campus – from CIS, CAS, and CG classes, as well as, ASPCC – and played computer games for OSHU Doerbecher Children’s Hospital for a combined total of 130 hours.  Not only did they raise $943 in our first year participating in the event; but, more importantly, students put their computer-related skills to work making a difference in our community!

A special thank you to all who sponsored our students, the instructors who helped oversee the gaming for all twelve hours on Saturday, the classes who worked on the networking of the computer games and the advertising posters, and the ASPCC for their on-going support of community-based learning.  The event would not have been a success without you.

For more information about these CBL events or to get your class involved, contact Diane Shingledecker CBL CTE Faculty Coordinator