This content was published: June 16, 2014. Phone numbers, email addresses, and other information may have changed. 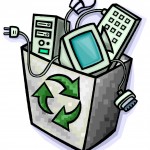 Since 2008, the Sylvania Campus has hosted an annual eCycling Drive to help the local Portland community recycle old electronics such as used computers and printers. In past years this event consisted of a one-Saturday-in-May recycling drive, however, this year a new approach was tried. For six weeks, eCycle bins were available during library hours from May 1 thru June 6. This effort to collect defunct electronics this year involved Computer Applications, Engineering, Philosophy, and ESOL classes on both Sylvania and Cascade campuses, as well as volunteer assistance from the PC4 Computer Club, ASPCC, and the Sylvania Environmental Center.

Why eCycle? Because electronic waste is the fastest growing part of our country’s waste stream. Electronics contain both re-usable materials and hazardous waste: dismantling them requires proper facilities and worker protection. However, most electronic waste has been shipped illegally to third world countries, where it is broken down by unprotected workers, poisoning their food and water.

This year, from May 1 to June 9, 47 donators brought in 654 items to be recycled. These included 29 towers, 7 laptops, 18 monitors, 16 printers, 20 keyboards, 7 mice, and 549 miscellaneous items. These donations will now be recycled responsibly by Total Reclaim, a local Portland recycling facility. Faculty/staff came out in force to donate; something they were not able to do as easily during our Saturday-in-May previous eCycling events. Special thanks go out to the library staff for joining forces with us this year and housing our eCycle bins!

We have high hopes for the 2014-2015 drive and we hope to include a second campus. Wheels are already in motion planning hard-drive smashing events and more for Fall Term. We hope that we can count on you for your continued support. 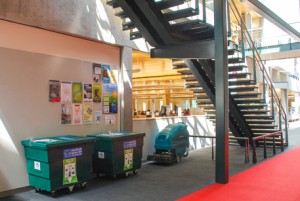 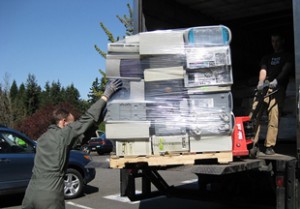 Old computer parts being loaded into a truck to be recycled.