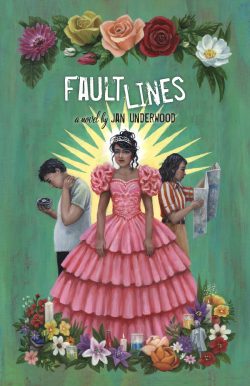 Portland Community College Spanish instructor Jan Underwood will be reading from her new book, “Fault Lines,” from 7-8 p.m., Thursday, April 28. Come hear an excerpt from this magical realist novel, followed by Q and A, at this event. Please join us at this Zoom link. Faculty and staff, students and friends are all welcome! Spread the word.

A boy who wants to die. A girl who would do anything to live. A stranger with their fate in her hands.

Cathie Ayala has never been to Santa María, the country of her parents’ birth. Now her beloved godmother has gone missing in that South American nation’s political turmoil. Risking her safety and sense of self, Cathie sets out to find the woman who raised her.

Instead she stumbles on two young people facing crises of their own. Injured in a terrible accident on her way to her fiesta de quinceañera, Jewel seems to have one foot in this life and one in the next—while Nicky is reeling from a spectacular failure to solve his own existential problem. The companions must succeed or fail together, navigating not only a war zone but each one’s relationship to death and life.