PCC’s collaboration with PSU, OHSU and Portland honors the legacy of Vanport 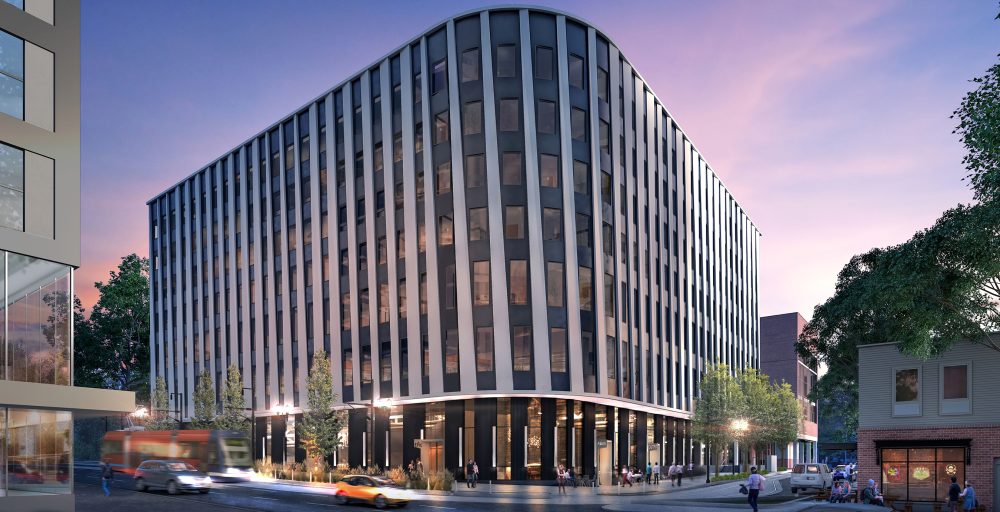 Portland State University is celebrating the newest addition to its campus by officially opening the Vanport Building. The new seven-story building is a collaborative project among Portland Community College, Portland State, Oregon Health & Science University and the City of Portland.

The building name commemorates the city of Vanport, the residents who were lost or displaced by the Vanport flood on May 30, 1948, and the Vanport Extension Center, which was eventually renamed and became Portland State University following the college’s relocation to downtown Portland. The decision to name the building in honor of Vanport reflects Portland’s diverse history and honors generations of activism, engagement and community organization within the city.

To mark the project’s completion, learn more about the building and what it means to the city by watching this video.

“We are proud to be a part of the Vanport Building, especially with what the naming symbolizes,” said PCC President Mark Mitsui. “I think of our three academic institutions, as well as the City of Portland, as bridges of opportunity. When we take a look at communities of color, and first-generation, low-income communities, and we see great jobs particularly in healthcare, our institutions will be key in bridging those together. The Vanport Building will be the cornerstone of that effort.” 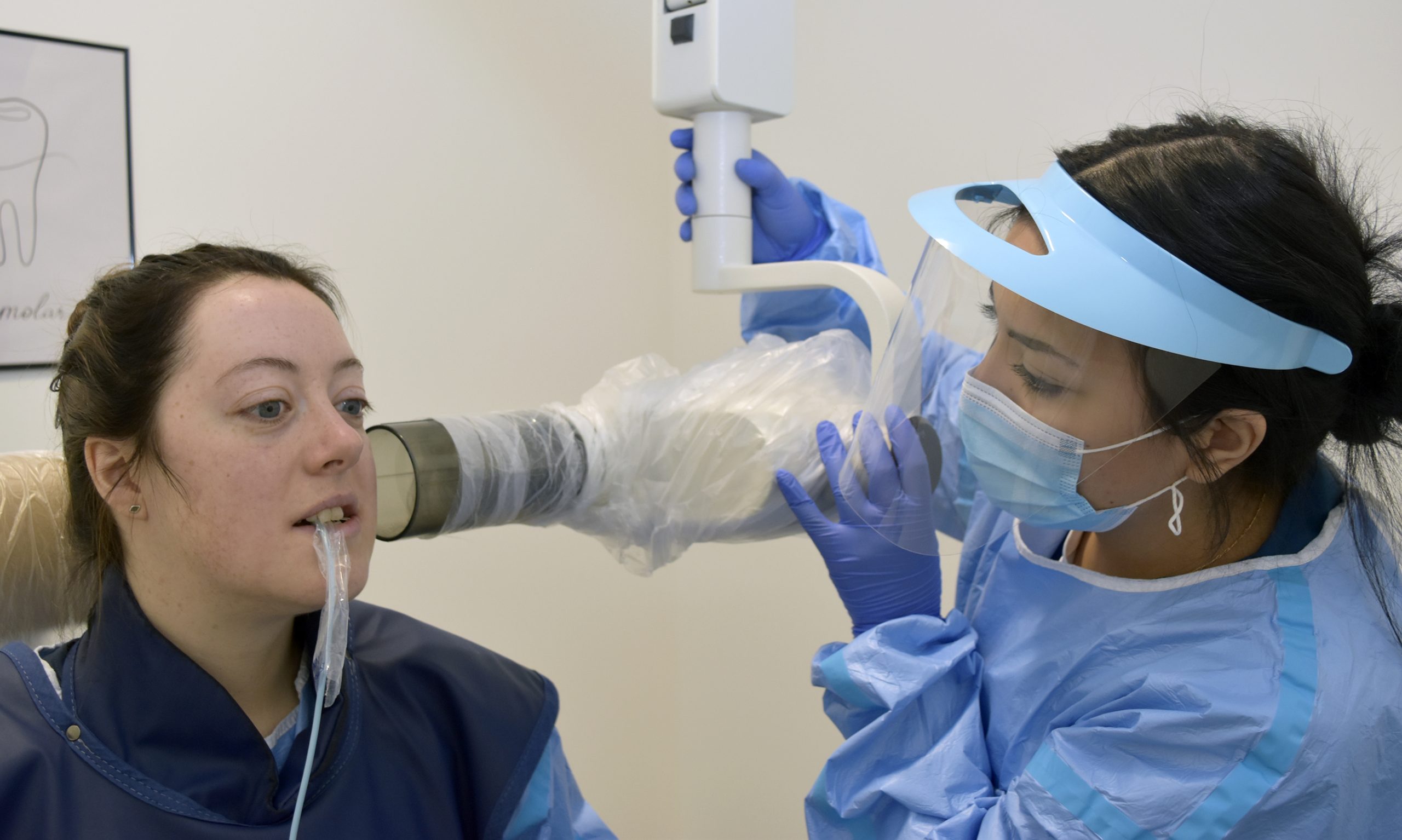 The building serves as a new home for PSU’s College of Education, the OHSU-PSU School of Public Health, PCC’s Dental Hygiene and Dental Assisting programs, and the City of Portland’s Bureau of Planning & Sustainability.

Building owners have partnered with Vanport Mosaic, a memory-activism organization dedicated to preserving and sharing the Vanport story, to design a mural and exhibit at the entrance to the Vanport Building as a permanent memorial to the town, the flood, and the people who called Vanport home.

Vanport was home to the nation’s largest wartime housing development during World War II and provided a home for people who worked in the shipyards. Because of racist redline practices, it also provided a home for thousands of Black Oregonians who were unable to purchase homes outside of Vanport, even after the war ended, the development’s population dwindled and its buildings fell into disrepair.

Vanport is an important reminder of the city’s racist past and the need to focus on becoming an anti-racist community, in part, by supporting new opportunities for historically underserved populations.

A mural by Portland artist Alex Chiu and an exhibition component by Bryan Potter Design has been created at the entry to the building. Named “The Spirit of Vanport,” the mural and exhibit’s creation was led by the Vanport Mosaic, a community-based memory activism organization, and will serve as a tribute to the spirit of Vanport. The project has been curated by Story Midwife Laura Lo Forti with Chisao Hata and Shalanda Sims.

The Vanport Building first opened for use in January 2021 and was designed by Portland’s SRG Partnership at a cost of $111 million. The building’s L-shaped design preserved the existing structures on the block while replacing a PSU parking lot that had been otherwise unimproved since the mid-1980s. It was designed collaboratively among the four owners to better connect workforce development, educational and economic opportunity. 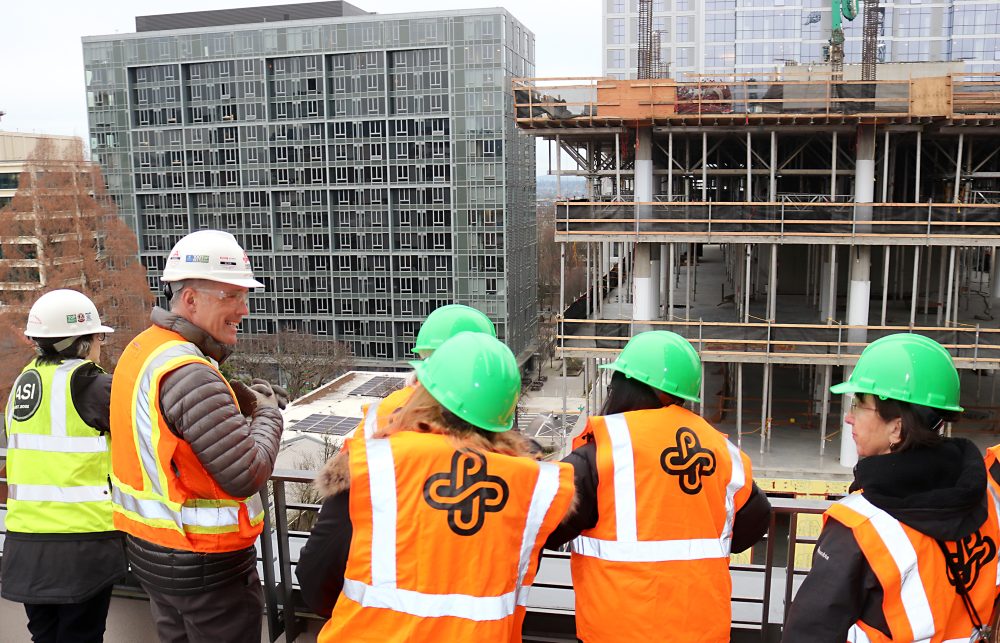 View from PSU’s campus during construction of the Vanport Building site a few years ago. PCC’s Dental Sciences staff tour the building site.

Ed Washington, a former resident of Vanport and community liaison with PSU’s Office of Global Diversity and Inclusion — “Through the work of so many people, we have a building now that honors Vanport, the city of Vanport, and the college that started in Vanport. I think it’s remarkable. It took 70 years, almost, and I think that’s a testament to the strength of not just what Vanport was, but what it did and its contribution to advancing this region and this state.”

Portland Mayor Ted Wheeler — “The Bureau of Planning and Sustainability’s new home will be a hub of collaboration, from which they will continue to shape the future of Portland and advance climate justice for a more equitable, healthy, prosperous, and resilient city.”

PSU President Stephen Percy — “As we celebrate Portland State’s 75th Anniversary this year, we are reflecting often on our roots in Vanport. The Vanport Building is a beautiful addition to our downtown campus and will serve as a symbol and reminder of our resilient past and our continued dedication to racial justice and equity.”

OHSU President Danny Jacobs — “Vanport represents an important part of Oregon history that we must acknowledge and learn from. The Vanport Building offers us an opportunity to honor those who were harmed, while reaffirming our commitment to creating an anti-racist future for Portland.”

City Commissioner Carmen Rubio — “Vanport was a vibrant, engaged and diverse community, where working families could make a healthy life, and where people took care of one another. There’s a collective, deep sense of loss for what this city could have been had the flood not happened or, more importantly, if city leaders had rightly valued the community. We take a small step in honoring Vanport’s value, and in reminding ourselves to value all our communities every day, by choosing this name.”