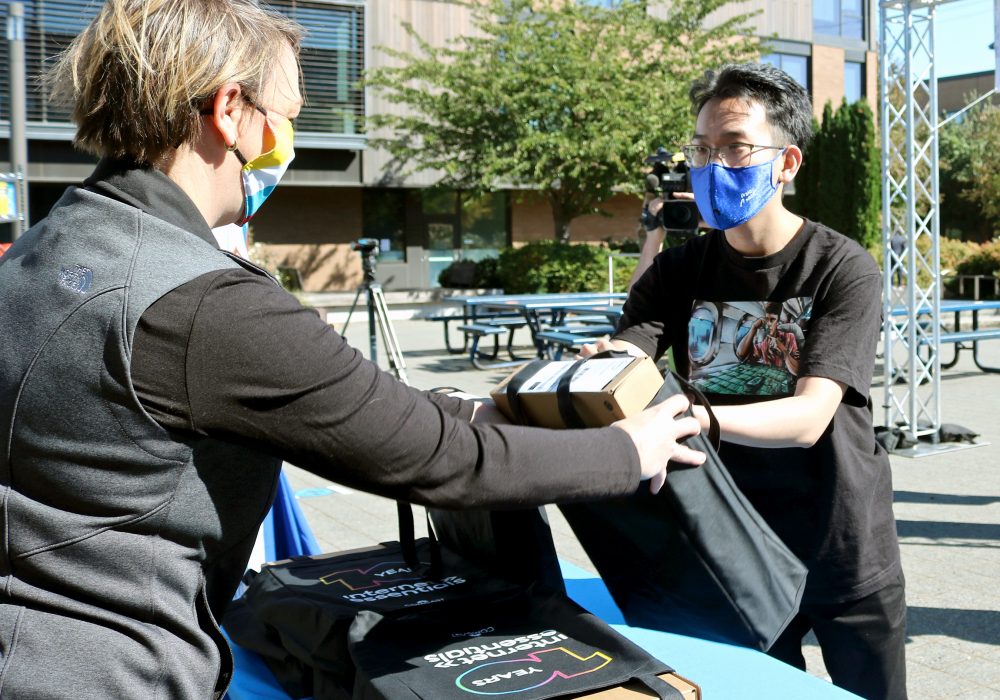 In recognition of 10 years of the Comcast Internet Essentials program, the organization provided 250 Dell Chromebooks to PCC students, including those who were named recipients of the PCC Foundation’s Bridges to the Future Scholarship.

“Comcast has been a wonderful supporter of our students during the years and especially during the pandemic,” said Christina Kline, who is the interim PCC Foundation executive director. “They have continually stepped up to help our students, with a focus on supporting historically excluded or underrepresented students in higher education, and the College is very grateful for its support.”

When the pandemic started in March 2020, PCC partnered with Comcast’s Internet Essentials, and the PCC Foundation helped cover the cost of affordable internet service for its students.

“Comcast and Portland Community College saw an opportunity to help serve an underserved population in celebration of our 10-year-old Internet Essentials program,” Comcast Vice President of External Affairs Marion Haynes said. “With the move to remote learning, it made sense for Comcast to help remove barriers for those who are trying to better themselves through education. Of course, it’s only a small part of helping those in school succeed, but Comcast was happy to do what we could.”

Along with picking up a Dell computer, students also had the opportunity to pick up free food from the Panther Pantry and take candid shots in the photo booth. While most of the computers were mailed out to students, some chose to pick them up in person at the Cascade event on Thursday and Friday at the Rock Creek Campus.

x by Monique Walelu 4 months ago

I read the note it said that students are given free laptops and I’m interested in receiving one too, please.

x by Felix Sanchez 4 months ago

I haven’t been to school since the nineteen hundreds and am excited to attend Pcc. However I don’t really know about resources and am in dire need of a laptop. Any help would be appreciated. Peace and God Bless

x by Yousef Taha 4 months ago

Can you let me know if it’s not too late to pick one up cause I need one….. thank you

x by Diane melendrez 4 months ago

x by Valerie Keeley 4 months ago

Is it too late to sign up for a discounted laptop?

x by Parwa 4 months ago

Is it to late for the free laptop? I am taking online classes and don’t have a computer or laptop. Please let me know

x by James Hill 4 months ago

x by Timothy Pham 4 months ago

For those of you who are not eligible for the free laptop there is an organization, FreeGeek, here in Portland that also provides low cost computers so that you can do your school work, looking for work, etc…

x by Linda López 3 months ago

I need a computer, i don’t have a computer I do my classes with my old cellphone and it’s very hard. How can I apply to get a computer?

x by Jaquelin 3 months ago

Hi I’m interested in getting one if it’s not too late, I also take my classes with an old phone, and it is very hard to do video calls and work in it at the same time. It doesn’t have to be new as long as it works it’s a blessing

x by Brunelle Seraya 3 months ago

Hello,
My name is Brunelle Seraya. I’m taking ESL classes and I need a computer please.

x by krisitne 3 months ago

I would like a free lap top my current one is not working right lots of technical difficulties when will this event happen again? and how do you notify students??? Thank you

x by Mary Bejar 2 months ago

How can I apply for a chrome book?

x by Dede Whitecalf 1 month ago