This content was published: February 7, 2020. Phone numbers, email addresses, and other information may have changed. 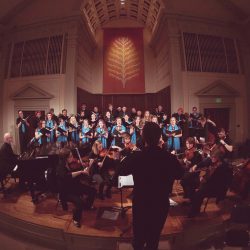 Tickets are $15 general admission, $10 students and seniors (high school/college students with valid ID). The concert is free for PCC and Pacific students, faculty, and staff.

At the time Brahms wrote his Requiem, the traditional text for the Roman Catholic requiem mass, or mass for the dead, contained text filled with images of the horrors of the last judgement. Brahms preferred text from Martin Luther’s vernacular version of the Bible, which sought to comfort those still living. The young Brahms had already experienced a great personal loss when his close friend and mentor, Robert Schumann, died in 1856. He finally completed the Mass in 1868, three years after the death of his mother.

The mass was controversial at the time because the text does not mention Christ or references to the Last Judgement. Regardless, his Requiem Mass became one of the most important works of Brahms’ career and established him as a major composer of his time. The piece is one of the most beloved in the entire classical repertoire.

x by tom 2 years ago