This content was published: November 4, 2019. Phone numbers, email addresses, and other information may have changed. 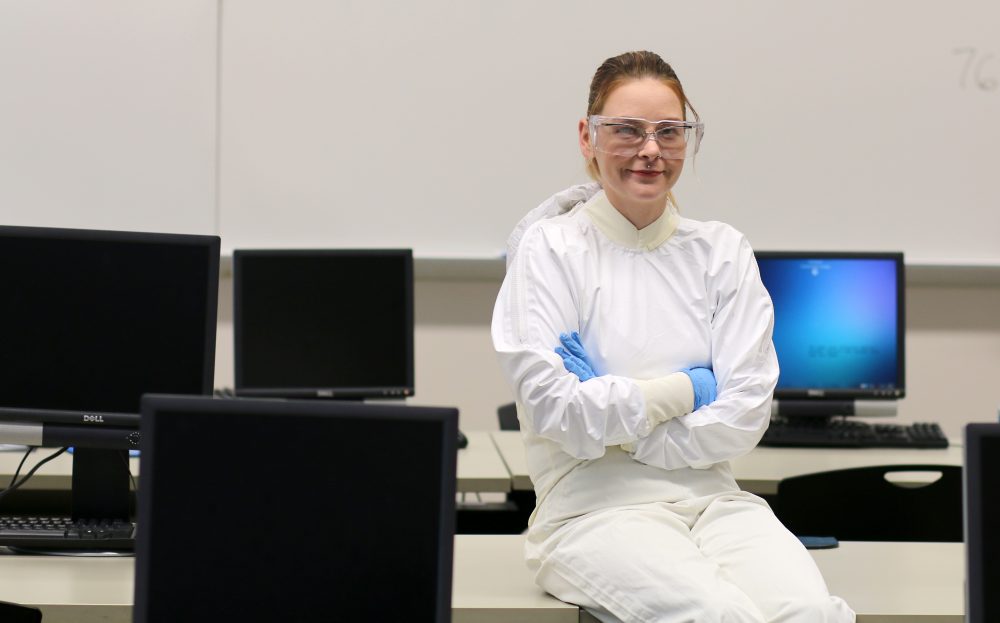 When Sarah Teters started her employment career, her job was low-tech.

Right out of high school, the 19-year-old enlisted in the Army and served from 2008 to 2014. After her service, she found work as a security guard, but it offered few career advancement opportunities.

“I didn’t make very much money,” she recalled. “The job wasn’t cutting it, and I didn’t know what else to do. I knew I needed an education, though. I decided to go back to school in 2016 because I needed a real career.”

Enrolling in college was an important first step for Teters to reinvent herself. The divorced mother of three had just moved in with her mother, enabling her to sign up for general education classes at Portland Community College’s Rock Creek Campus.

“It was on me to supply the money,” she cautioned. “It was essentially ‘go time.’” 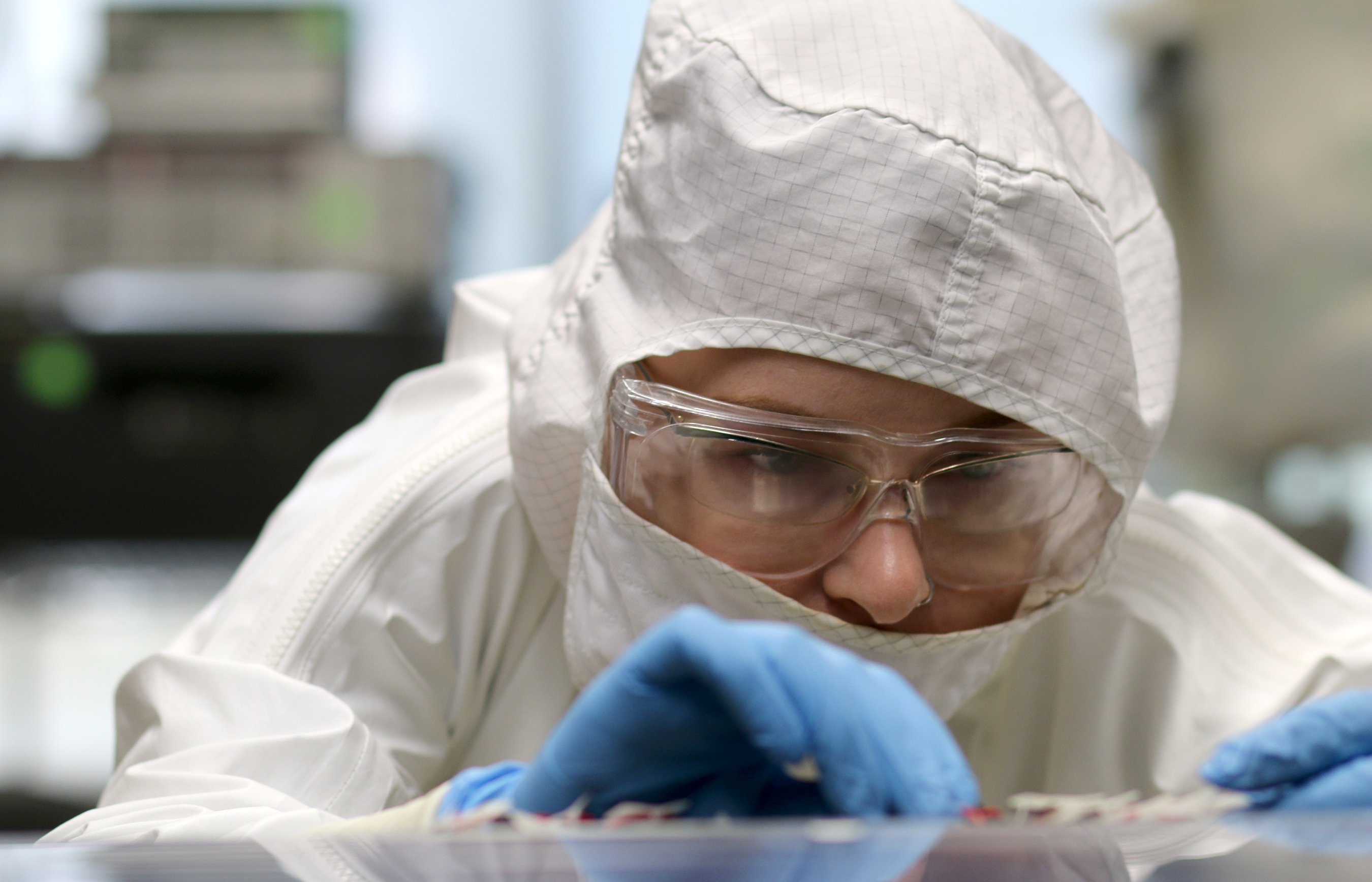 A self-professed problem-solver, Teters discovered math classes that challenged her. These classes became the basis for her to transition into the Microelectronics Technology Program.

“It was all fresh and new,” she said. “There was a learning curve, but the instructors were really good and super supportive.”

The Microelectronics Technology Program, based at Rock Creek, teaches students how to maintain and repair the highly complex manufacturing equipment used to make integrated circuits and solar cells. They also work on vacuum and plasma systems, as well as process tools used by the industry.

Teters earned a National Science Foundation scholarship for women and underserved students that helped her focus on her training, which included the program’s job interview class.

The class features professionals and volunteers from the semiconductor industry who work with second-year students to develop their resumes and perfect their interviewing skills.

Armed with the skills learned from the program, Teters met with Intel and was offered a job shortly thereafter. During the past seven years, nearly 100 percent of microelectronics graduates are hired before or right after graduation.

“I am very proud of Sarah,” said Dorina Cornea-Hasegan, microelectronics instructor. “Her success story is truly the theme for our program.”

Teters’ security job is now a distant memory. She earned her associate degree and secured work at one of the world’s leading tech companies.

“I went from living in a bedroom at my parents’ house to having my own place,” Teters said. “I developed a career and it’s great. The opportunity is there because you have this amazing support at PCC, especially in this program. As long as you don’t give up on yourself, you can make it.” 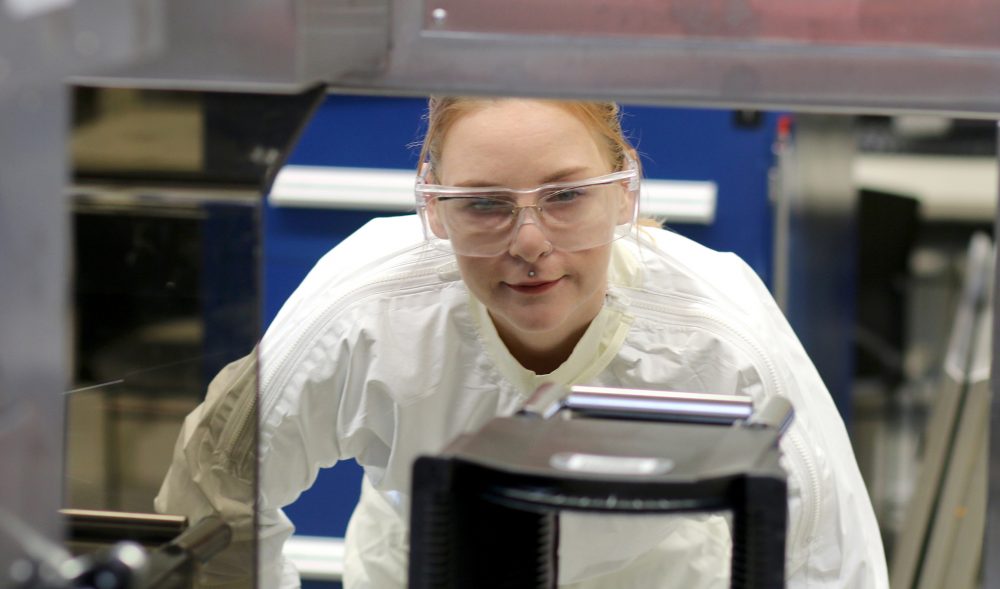 x by Dorina Cornea-Hasegan 2 years ago

Indisputably, Rock Creek’s Microelectronics Technology (MT) is one of the top major choices any new PCC student should make if looking for a very rewarding career and expecting employment before or immediately after graduation.

Every year there are many MT students who, just like Sarah, receive the NSF STEM scholarship soon after MT enrolling, and plenty of funding is still available.

Your own success story is yet to be written, act now!

x by Bill Manley 2 years ago

Sarah’s story illustrates the immediate application of the skills developed through the PCC Microelectronics Technology (MT) program responding to the urgent need for Technicians in the semiconductor industry.

With the on-going “ramping up” of the industry, the demand is much higher than the MT program (and related PCC programs) can fulfill.

Dedicated and motivated students like Sarah can obtain fulfilling and productive careers with many local companies that have world-wide connections.

x by Jenny Kirchler 2 years ago

The Microelectronics Technology program provides the training and hands on learning that is valuable to students as well as employers in the semiconductor industry. Many students get job offers before finishing the program.

I am the program advisor and student specialist for MT and if you are interested in learning more about the MT program and the amazing employment opportunities in this industry, contact me and I will help you reach your career goals.