This content was published: December 17, 2018. Phone numbers, email addresses, and other information may have changed.

Story and Photo by Elia Unverzagt.

A donation from the Elks Lodge in Hillsboro has resulted in the creation of one of PCC Foundation’s largest scholarships dedicated exclusively to career technical education (CTE).

The Lodge set up its endowment with a $25,000 donation in 2016, and then donated another $25,000 in 2017. This year, the Lodge increased its donation to $50,000, growing its endowment fund to more than $100,000. Additionally, the organization has contributed funds to immediately support CTE scholarships as the endowment matures. The Lodge presented this year’s donation to Rock Creek Campus President Chris Villa at a recent Elks meeting. 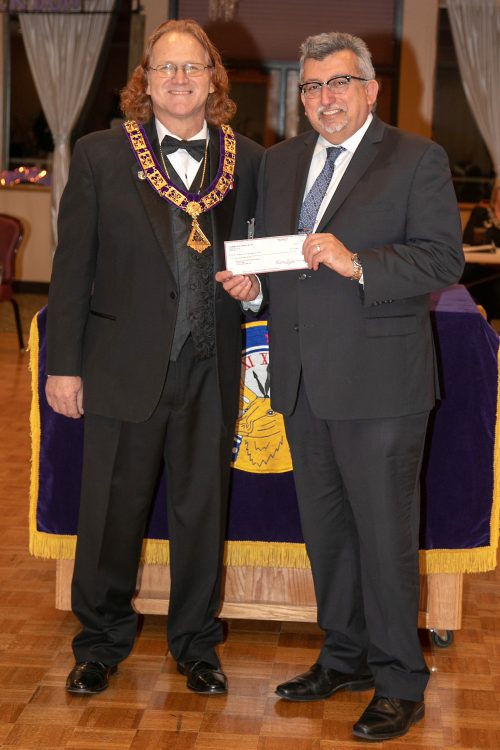 In total, PCC has more than 50 CTE-focused programs at locations across the Portland metro area.

“Our Lodge has long supported scholarships for students at four-year universities, but I thought we should also offer something to support students who, for whatever reason, choose not to pursue the traditional path to college,” said Ellis Mason, past chairman of the Hillsboro Elks Lodge #1862 board of directors.

Mason had approached the Lodge three years ago about starting an endowment with the PCC Foundation for CTE scholarships to support students in the Hillsboro area without a grade-point average requirement.

“There are a lot of Lodge members who are career-technical graduates and who are living great lives,” he said.

It turns out that many Hillsboro Elks members are PCC alums and have an interest in giving back. Mason also hopes that students who receive the scholarship are able to get good training and jobs, like Arielle Jones, an Ophthalmic Medical Technician Program student who was the first recipient of the Elks Scholarship. Jones came to speak to the Lodge, and Mason said that members were impressed with how motivated and personable she was.

“She left a strong impression, and I believe that led to our increased support this year,” Mason added.

The Elks Scholarship is specifically designed for students pursuing an associate degree or certificate in a CTE program and are living in Hillsboro, North Plains, Aloha or Cornelius. The scholarship is one of 382 different funds at the PCC Foundation. Last year, it awarded a total of $1.8 million in scholarships to 1,300 students.

“We’re very appreciative that a service organization would recognize the value of investing so generously in PCC, because we know there are a lot of choices for their giving,” said PCC Foundation Executive Director Ann Prater. “We’ve been very impressed by the community service and benevolence of this organization.”

The Hillsboro Elks Lodge #1862 has about 850 members. The Benevolent and Protective Order of Elks of the United States of America is a national organization with nearly 2,000 local lodges in communities all over the country. The Order spends more than $80,000,000 every year for benevolent, educational and patriotic community-minded programs.

Heavy Metal, Rising to the Challenge, Poised for Recovery