This content was published: October 29, 2018. Phone numbers, email addresses, and other information may have changed. 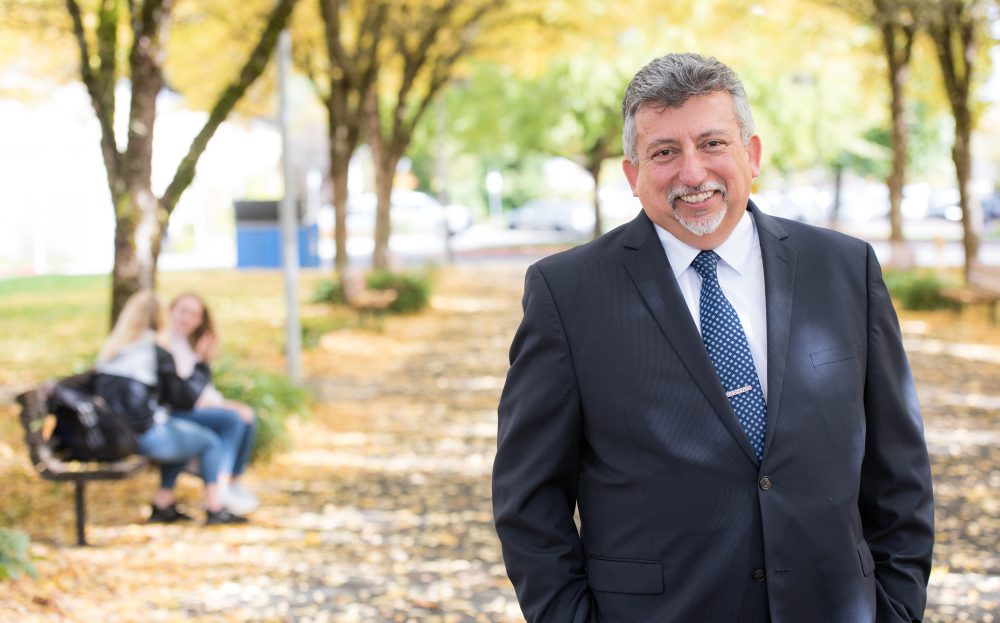 Dr. Chris Villa sits in his office overlooking the pastoral majesty that is the Rock Creek Campus in Washington County.

Villa, who started in his new job as Rock Creek’s president last summer, has been settling in to the duties that come with the leadership position within Oregon’s largest institution of higher education.

He’s getting ready to tell his life story. But Villa is troubled by a statistic that he’s been obsessed with since he began as a college recruiter at Cal-State Bernardino — less than one percent of all Latinos earn doctorates. It’s a statistic he’d like to change for students at PCC.

“I’m in a position to make a significant difference for folks like me,” said Villa, who earned a doctorate in Educational Leadership and Policy from the University of Utah as well as a master’s degree in Public Administration from the University of Southern California. “I realize that I’m a ‘less than one percenter.’ It’s atypical for somebody like me because you’re probably the only one within your extended family that has earned one. As a result, many in the community don’t feel it’s achievable, but it is.” 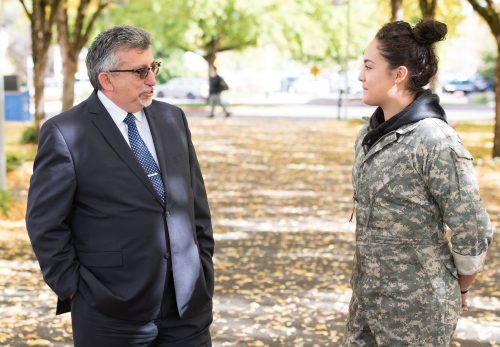 It’s important to Chris Villa to show education is accessible and attainable for everyone.

It’s no accident he now leads Rock Creek. The campus is situated in one of the leading growth areas of Oregon — Washington County. It’s also the epicenter of population growth for Hispanics in the state. This is reflected in the changing demographics at PCC as 12.2 percent of the students are Latino and at Rock Creek it’s more than 14 percent.

It’s important to Villa to show education is accessible and attainable for everyone. His life has been dedicated to serving in education — he’s been the vice president of Student Services at Los Angeles Mission College and Fresno City College, as well as taught doctoral and master’s level courses within the Educational Leadership and Policy Studies Department at Cal-State Northridge.

Villa wants to be a role model to students who face the same challenges he did growing up. After his parents married in 1947, the Villa family (Chris and his four siblings along with extended family) settled into East Los Angeles. It was a low-income, working class neighborhood with his mom working as the homemaker of their 600-square-foot home and his father, a World War II Army vet, working in factories.

His father, who immigrated to the U.S. as a child in 1919, never took advantage of the G.I. Bill but that didn’t mean education wasn’t important.

“He made the choice to work in factories all his life,” Villa remembered. “But he, and especially my mother, pushed education on us kids.” 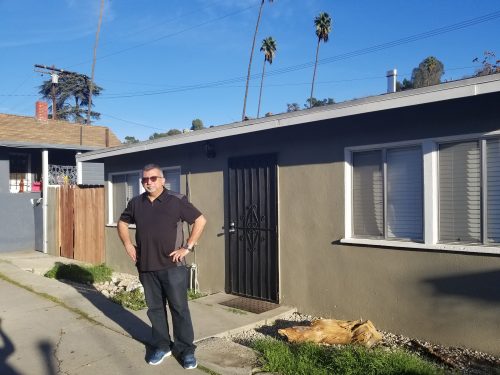 Villa standing outside his childhood home in East L.A. where he’d take a bus across town to attend Catholic school.

The young Villa was put through Catholic schools until college, which was an expensive choice for his hardworking parents. But the sacrifice of this choice paid off as it insulated him from the pitfalls many kids fall into at that age and in that neighborhood, from graffiti to gangs to drugs. So, he had to travel back and forth across town to Loyola High School, a predominantly white, upper income Jesuit college prep school.

“I didn’t want to let them down,” Villa said. “We were recruited from the Eastside to go there. Half of us graduated while the other half couldn’t make the cultural adjustment. My dad taught us to respect people from all cultures and he instilled in us to value the freedom and opportunities of what this country has to offer. That philosophy was essential to my success.”

With support of his parents and family, Villa catapulted to U.C. Irvine to start college where he earned a bachelor’s degree in Social Ecology and got involved in social justice organizations, which all furthered his skill sets.

As he talks about his life, you can tell how it’s all come full circle for Dr. Chris Villa, the academic leader and role model. He ruminates about a theme to the story. Maybe it’s “Unlocking of Doors,” he said, because of all that family and community support he received enabled him to soar academically. Bottom line, though, he wants to show PCC students who face similar challenges as he did or financial constraints as his family endured, that college can be for them as well.

“Education has done a lot for me,” he said. “It’s the door that has fulfilled my life and can fulfill theirs, too.”

x by Max Macias 3 years ago

Thanks for being here Dr. Villa!

x by Maria Fernandez-Diaz 3 years ago

Thank you for sharing your story and insights on how to get ahead!

x by susy 3 years ago

Thank you for sharing your story, as a Latina we struggle to get to a bachelors, but we know we can do more!

Dr. Villa, Thank you for your inspirational story and congratulations for your Presidency. I hope we can all inspire each other and be inspired by our Amazing Students here at PCC/Rock Creek Campus.

x by Joseph Hernandez 3 years ago

Thank you for sharing your story!

x by Ivan 3 years ago

Thank you PCC for highlighting diversity, equity & inclusion. I’m so looking forward to the positive impact that el doctor Villa will have in the community and to the inspiration that all the LatinX community will recieve. My sleeves are rolled up and I’m ready to collaborate with PCC. Gracias.

x by Diane Stobaeus 3 years ago

Teach-in next Wednesday is going to be worth it for more community unity!
(Same bat time- same bat channel ) Thank you for the e-mail that started this new circle, giving all students and faculty a bridge to each other in these times of trumpery.
May that circle grow wider, especially for more students to be engaged in getting our community stronger … because we are BETTER TOGETHER … fearless.
Your story speaks to that fearlessness against all odds. In the words of Susan B. Anthony “Failure is Impossible” 1905 Gratitude; from a non-traditional student, Di

x by Jaime Amézquita 3 years ago

Wishing you success. Thanks for your efforts and contributions in helping Latinos.

x by Josh 3 years ago

He is not a traditional student in more ways than one. Simply being a man on college campuses makes you a minority on campus now. Enrollment of men is suffering at the moment and we need to think of how to make the college experience more inclusive for men.

x by Heri Bishinaba 3 years ago

I really like school but I do not have any kind of support to continue to study, but if I could find other way I really appreciate because I am going to accomplish my goal .

x by Heri Bishinaba 3 years ago

you may help people who do not have support