This content was published: August 31, 2018. Phone numbers, email addresses, and other information may have changed.

History walk travels back through Portland’s African American past

History is many things – people, their deeds, their values, their triumphs and follies. It’s shaped by factors like art, music, politics, culture, and cuisine; but in terms of community, it’s often grounded in something much more concrete: a sense of place.

It’s this sense of place that animated the recent Albina Black History Walk, an interactive stroll through the heart of Portland’s historical African American district. The walk was conceived by Andrea Lowgren, history instructor at Portland Community College’s Cascade Campus, and led by students in her African American History class. 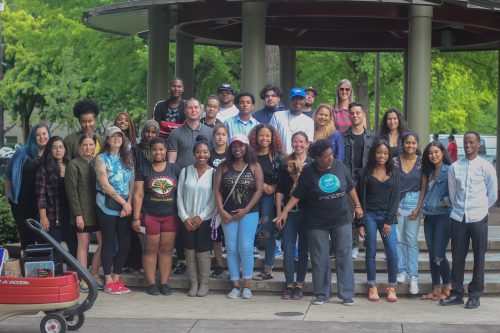 Andrea Lowgren, back right, and her African American History students.

“I love place-based history,” Lowgren explained. “Many people’s experience of history is abstract. It centers around memorization – dates, wars, presidents, that kind of thing. I was looking for a way to connect students with the history of the city in a tangible way.”

Lowgren’s students – some of them native Portlanders, some newer arrivals – researched the Albina district and researched key sites to serve as stops along the history walk. They were encouraged to gravitate toward locations that resonated with them in some way — whether historically, personally, or in some other fashion – and then in groups created a presentation for each of these places. The students led the participants on the walk, narrating as they progressed from station to station.  Attendees included family, staff and students from PCC, friends, as well as people who are currently or formerly from the Albina neighborhood.

“This was such a powerful experience, to hear the stories and stand on the ground that is infused with the rich black culture of Portland,” said Cascade Campus President Karin Edwards, who took part in the walk. “While many of the buildings have been demolished, the spirit of the African American community is still strong, and efforts are being made to help this population return home.”

The walk – the second that Lowgren and her students have led (the first was in 2017) — started and ended at Dawson Park, and followed a roughly one-mile route with stops at the Urban League of Portland, Harriet Tubman Middle School, the former site of the Black Panthers’ Fred Hampton Free Clinic, Vancouver Avenue Baptist Church, and the former site of two local nightspots, Van’s Olympic Jazz Club and LV’s Twelve-22 nightclub.

One of Lowgren’s colleagues, Susan Watson, a native Portlander, was so moved by the 2017 history walk that she asked if her Web design students could create a Web site for the 2018 edition as their capstone project. Some of Lowgren’s students attended the Web design students’ final presentations, and selected the winning site from among three candidates. The site served as a companion piece to the history walk, with a map of the route, information on the tour stops, and historical information on Albina’s storied past.

Other members of the community offered to support the 2017 history walk, as well. Alberta Cooperative Grocery chipped in free snacks for participants, and Kiauna Nelson, a PCC alumna and proprietor of the popular Kee’s Loaded Kitchen food card, provided cookies.

The Albina district was a city in its own right until it was annexed by the City of Portland in the late 1800s. Its indelible connection with Portland’s African American community began in the mid-20th century, after the city of Vanport – located at what is now Delta Park – was destroyed in the infamous Memorial Day flood of 1948.

Vanport was, at the time, the second-largest and most diverse city in Oregon, home to the thousands of people who made their way here to work in the Swan Island shipyards during the Second World War. When the levee holding back the Columbia River burst in 1948, most of the African American population of Vanport relocated to Albina.

Lowgren is quick to point out that this was no accident. By way of the nefarious practice known as redlining, Albina had already become Portland’s black neighborhood, where most of the city’s small enclave of pre-war African Americans lived (a handful also lived across the Willamette River, Lowgren said, in the area around Union Station). The refugees from drowned Vanport settled in Albina because they had no choice.

The neighborhood has changed dramatically over the years due to a range of influences: the construction of Interstate 5 and Legacy Emanuel Hospital – which displaced hundreds of families; the urban decay that typified so many black neighborhoods in the 1970s and 80s; and – more recently – gentrification, which has engendered another wave of displacement. All of this rich legacy was represented during the history walk.

In addition to leading the walk and creating narratives for each stop, Lowgren’s students wrote a retrospective describing what the event had meant to them and how it informed their understanding of Portland as a modern city.

For one student, the history walk unearthed feelings of connection to a community that hadn’t previously been expressed.

“I grew up in a private school, one of two black students, and believing racism didn’t exist anymore,” the student wrote. “I believed Black Lives Matter was an overdramatic movement and the focus should be on police brutality alone. I lived 23 years of my life ignorant to the history of my people.

“The information I learned through this project and the entire course answered so many questioned and healed so many buried wounds,” the student continued. “It taught me that I am a part of something so much bigger than myself – a community – something I never felt strongly about before. In fact, I felt out of place, a light-skinned suburbanite, around the black community. … This project helped heal my insecurities and gave me a fiery pride.

“A lot of members in this community – especially African-Americans – not only don’t know the history of Albina, but don’t even think about its relevance to life today. I was one of them, and sharing the neighborhood’s history is not only a way to reconnect to your community, but a way to better learn who you are by learning about where you came from.”