This content was published: September 15, 2017. Phone numbers, email addresses, and other information may have changed.

Jessica Bernards has won a prestigious national honor given to people who teach mathematics at a community college.

Nominated by her peers, she was selected from a pool of more than 300 math instructors from around the country. The Leila Simon Peskoff Award is funded by contributions to the American Mathematical Association of Two-Year Colleges (AMATYC) Foundation. The award is a lifetime membership in AMATYC.

A Rock Creek instructor since 2010, Bernards explained that part of the selection criteria is the completion of the two-year program, Advancing Community College Careers: Education, Scholarship and Service (ACCCESS), which is supported by AMATYC. 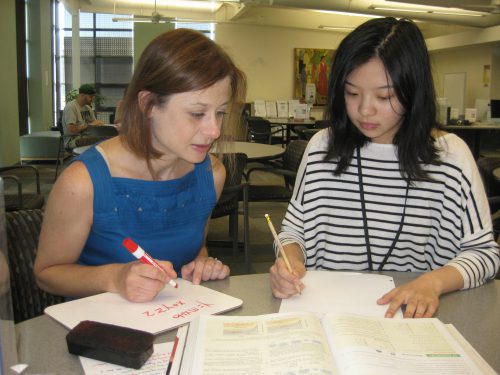 “Each year, the ACCCESS program selects between 20 and 25 new math hires from community colleges across the country,” she said. “They provide the best mentoring and professional development I’ve ever had, and from this small group, five PCC math teachers have been selected over the past five years, with three of the five coming from Rock Creek. The ACCCESS program prepares you to be a leader in the math-teaching community.”

Bernards believes that one thing that might have helped her stand out in such a crowded field of math teachers is a math study skills program she and a colleague designed. The program includes a video, worksheets and a five-minute activity involving seven essential math study skills topics. It is free and available on YouTube and on PCC’s website at spot.pcc.edu/mathstudyskills.

The program offers seven sections: Math and Test Anxiety; Math Homework—How to do it, Understand it and Retain it; Time Management; Listening and Note-Taking Skills; Resources; How to Study for a Math Exam; and How Learning Math is Different.

“The math study skills program is now used at more than 20 community colleges across the country, and the Math Study Skills YouTube channel has had more than 23,000 views from all over the world,” said Bernards. “It has been shown to improve pass rates by 14 percent and enables users to pass math classes with higher grades.”

Bernards is well aware of the national crisis involving math competency. When asked what she believes is at the root of this challenge she said, “The main issues are math anxiety, attitude and time spent studying. Math requires a different kind of studying, unlike any other subject, and having a strong foundation in it and believing you can do it is essential for success. Anyone can learn math. There truly is no such thing as ‘I’m just not a math person.’ It just takes believing in yourself, the commitment to persevere and succeed, and the time to devote to the subject.”

Bernards is not the only PCC math instructor selected for the ACCCESS program. Austina Fong and Sonya Redmond from Rock Creek, Tammy Loiue from Cascade Campus, and Stephanie Yurasits from Southeast Campus are also ACCCESS graduates.