This content was published: June 5, 2017. Phone numbers, email addresses, and other information may have changed.

Students work with college leaders to develop policy on investments

The Portland Community College Board of Directors has passed a resolution to ensure the college will not invest in companies or funds that harm the planet or people.

This month, the PCC Board passed a resolution to divest college money from fossil fuel-producing and socially irresponsible companies and investments. PCC is one of a handful of higher education institutions nationwide and the only community college in Oregon to have officially divested in this manner. 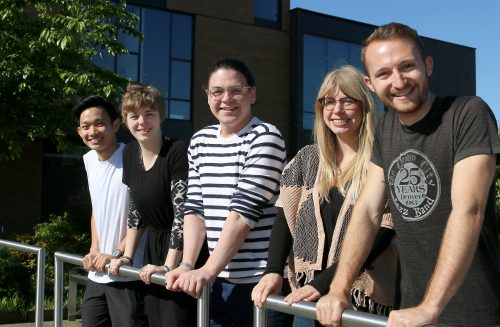 Thanks to support from Briar Schoon (second from right) students were able to change board policy on its investments. Students who made a difference included, right to left, Alex Bell-Johnson, Sebastian Scholene, Molly Walker and Kien Truong.

“I believe deeply that passing this divestment resolution was the right thing to do,” said Board Chair Kali Thorne-Ladd. “In its commitment to equity and sustainability, PCC must support operational practices that model the sustainable use of resources, as well as advance the promotion and protection of human rights and fundamental freedoms.”

California has been on the forefront of socially responsible investing for public institutions. CalPERS, CalSTRS, Stanford and the University of California system have actively divested from gas and coal companies, as well as from prisons, firearm makers, tobacco and countries that repress human rights.

The new PCC policy means that the college’s treasury manager will not invest in securities of fossil fuel companies as listed in the Carbon Underground 200 (benchmark index of polluters), other similar indices, or any company or country that abuses human rights. Every year the treasury manager, with representatives from the District Student Council, will review PCC’s portfolio of holdings to ensure it meets the divestment policy’s requirements.

The movement to divest was started by student leaders like Alex Bell-Johnson in early 2016, and supported and facilitated by Briar Schoon, the college’s sustainability manager. They partnered with 350pdx.org (a climate action organization) and PCC’s financial leaders to review the college’s current portfolio.

“We didn’t have to sell it to college leadership,” Bell-Johnson said. “PCC already didn’t have direct investments in fossil fuel companies. The policy serves more as assurance that this will be the standard process, now and in the future.”

The college’s current investment portfolio balance is about $220 million. Treasury Manager Dee Wilson stated that PCC approaches its fiscal obligations responsibly, only investing “in very high quality instruments.” She said investments are handled by her department, which follows the markets daily and works closely with a number of national and regional broker dealers to purchase investments directly.

“When Alex and Briar came to me to talk about divestment, I was intrigued,” Wilson said. “We were already careful about our investment choices and favored those that supported the college’s sustainability goals, so their idea was a natural fit. Personally, it’s really rewarding to know that the values I hold close will be reflected in the college’s investment holdings long after I’m gone. It’s a good feeling.”

The students and Schoon found the process of getting the policy in place smooth since the PCC investment portfolio was reviewed favorably by 350pdx.org. Also, buy-in for the policy was helped by PCC President Mark Mitsui’s service on the climate leadership steering committee of Second Nature, an organization whose member institutions work to lower the impact of their carbon footprint. It has pushed to have schools divest their portfolios of polluters.

“The administration has been very receptive,” Schoon said. “The more we can responsibly invest the better, because this is about much more than just returns. It’s about affecting climate and social change on a global scale.”