This content was published: March 13, 2017. Phone numbers, email addresses, and other information may have changed. 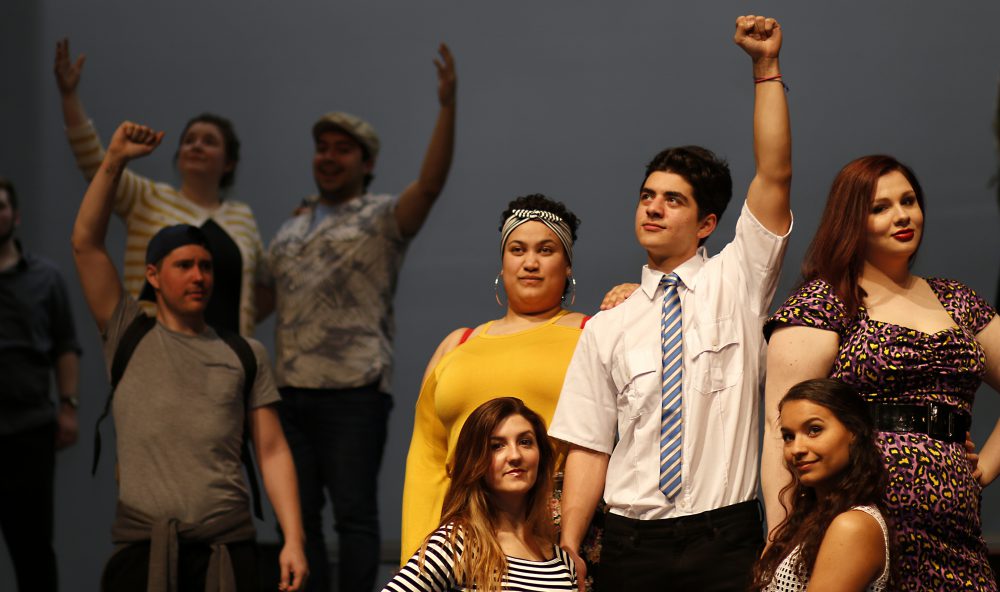 The Visual, Performing Arts and Design Department at the Sylvania Campus is presenting the Tony, Grammy and Pulitzer Prize-winning musical “In the Heights,” this March.

“Hamilton” creator Lin-Manuel Miranda wrote the music and lyrics based on the book by Quiara Alegría Hudes.

“I am so excited to offer the community the chance to see the talented students, faculty and staff who will be part of ‘In the Heights,’” said Visual and Performing Arts and Design Division Dean Gene Flores. “This is a wonderful learning opportunity for everyone who is a part of the production, and the musical’s themes are timely for the audience, as well.”

The highly touted, two-act show was nominated for 13 Tony Awards and won four, including Best Musical and Best Original Score. It also earned a Grammy nod for Best Musical Show Album in 2008, followed by the 2009 Pulitzer Prize for Drama. 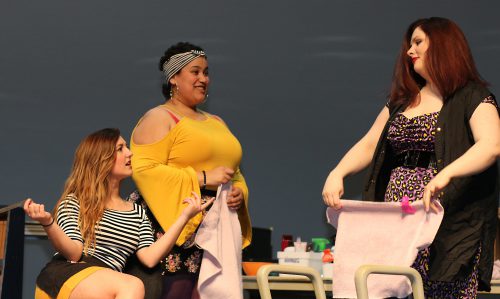 Left to right, Brice Schmietenknop as Vanessa, Lauren Hernandez-Lamont as Carla and Hannah Thorton as Daniela.

“In the Heights” opened this past weekend and continues Wednesday through Sunday, March 15-19 in the Performing Arts Center, Sylvania Campus (12000 SW 49th Ave.). A matinee performance will take place at 11 a.m., Thursday, March 16 and at 2 p.m., Sunday, March 19.

General admission tickets are $15. Tickets for students are $10. For tickets and more information, please visit www.pcc.edu/about/theatre.

This production contains profanity and adult situations. It is recommended for mature audiences only.

“In the Heights” takes place in the largely Dominican-American borough of Washington Heights in New York City. Over the course of three days, the audience gets to know this tight-knit Latino community and their aspirations for themselves and their families. Set to hip-hop music reminiscent of the 1990s and orchestrated with Cuban and Latin rhythms, the show is a party waiting to happen.

“‘In the Heights’ is a remarkable tale of families and neighbors with hopes and dreams, successes and failures, wrapped in the tapestry of the American Dream,” said “In the Heights” Director and Music Instructor Julianne Johnson-Weiss. “The musical reflects their struggle to be American, while holding on to the culture and traditions, which intrinsically denote who they are and why they survive.” 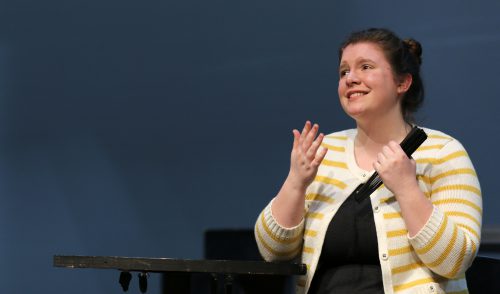 The production will also include the Broadway set and props from “In the Heights” that were used in Richard Rodgers Theatre from 2008-2011 and then on the U.S. National Tour from 2011-13. Designed by Anna Louizos for the Broadway production, the set now travels the country for local shows and will come to PCC from Michigan. The set is approximately 40 feet wide and 22 feet high and will take two days and more than a dozen students, faculty and staff to load into the Performing Arts Center.

“Diversity, equity and inclusion are important topics at PCC and during this changing political climate, and this musical is a good way that we could tackle those issues about gentrification, understanding your background, keeping touch with your roots and trying to blend in with the American Dream,” Flores said. “When we looked at what musical we wanted to perform, “In the Heights” made sense.”

x by Amber Hicks 4 years ago

What an amazing production! The music is still in my head. I brought my family and we all are still dancing. Thank you for the timely production at PCC.