This content was published: December 7, 2016. Phone numbers, email addresses, and other information may have changed.

Don’t be afraid. This is one robot invasion you want to embrace 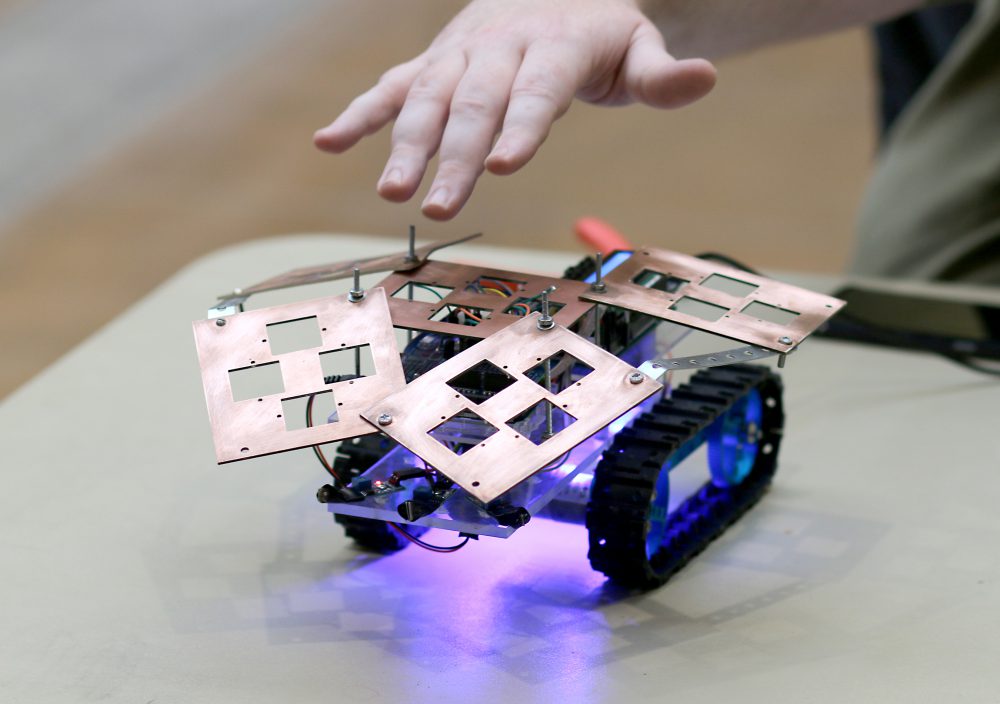 Drag-o-bot and Johnny 2 love playing Marco Polo. Actually, it’s all they want to do.

The two are not humans, but robots that play the age-old game typically reserved for swimming pools. The bots were created by Aaron Augustus and Michael Campbell, who are students in David Goldman’s EET 242 “Microcontroller & Embedded Systems” class and are part of a finals week frenzy of technology being showed off in Sylvania Campus’ CC Mall. 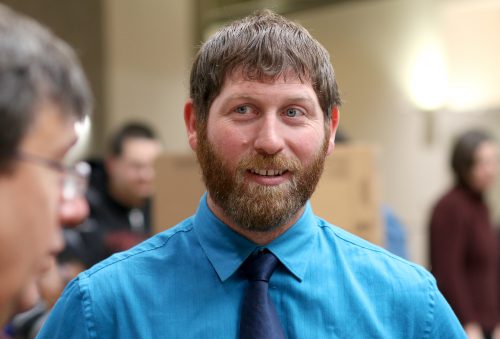 The course introduces the use, characterization, analysis, troubleshooting methods and programming of microcontrollers and embedded systems with a focus on application.

Curious about how the students have applied their studies? About a dozen students’ projects, from wheeled robots to flying drones to paddle bots playing pong, will be officially graded between 9-10:30 a.m., Thursday, Dec. 8, also in the CC Mall. Program staff encourage the PCC community to stop by and check out the dozen or so creations.

Augustus and Campbell’s HC-12 RF modules will be there, too. The robots use GPS and radio frequencies to locate one another during the game of Marco Polo. They sport an interactive touchscreen that controls a single microcontroller that can transmit and receive up to 1,000 meters. 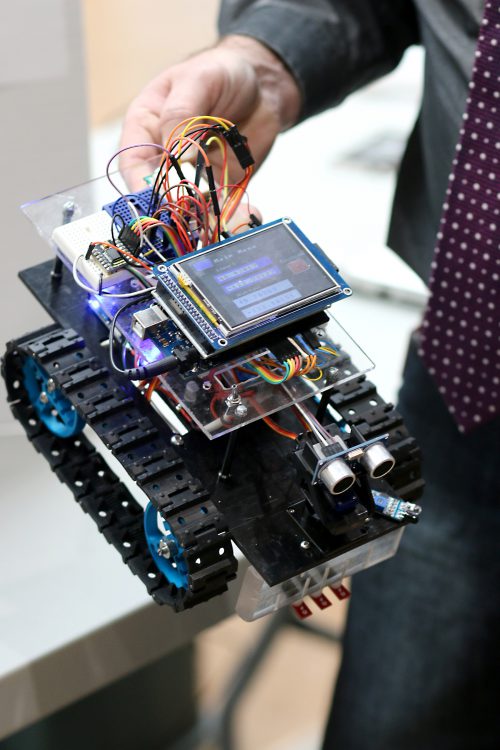 Campbell said the use of of radio waves for the robots was a no brainer as they are used in a multitude of devices in the real world, from garage door openers to stereos. The GPS systems acquire the locations that can be transmitted back and forth between Drag-o-bot and Johnny 2 to eventually find each other.

“We chose this method for its simplicity and range,” Augustus said. “We tested them through walls, on different level floors as well as over short distances. Working together we were able to accomplish our goal and as a result can not only collect our current GPS location but also transmit it or receive the location of another robot via radio waves.”

Both students said they knew nothing about microcontrollers when they started the class in September. But over time they worked together to piece together coding and the hardware to make them work. In total, it cost them $60 to make the robots, using low-cost GPS units and microcontrollers.

“This course has been amazingly awesome,” Campbell said, who re-careered into the Electronic Engineering Technology Program after working in a back-busting industrial trade for 20 years. “I shake my head that we were able to get them to work.”