This content was published: November 21, 2016. Phone numbers, email addresses, and other information may have changed.

The Physical Sciences and Art programs collaborated to create the “Faces of Science Mural” on the north side of the ST Building at the Sylvania Campus, which depicts a group of diverse, under recognized scientists.

In fall 2013, chemistry faculty member Ted Picciotto participated in a diversity training and it sparked the idea to create the mural. In line with PCC’s strategic initiative to create a climate of diversity, equity and inclusion, the mural serves to inspire students by highlighting scientists that reflect the diversity of the student body at PCC Sylvania. 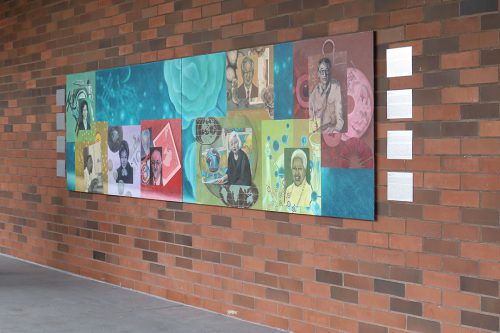 The artwork was created by three art students — Rich Cortez, Vanessa Kniffen and Shannen Muhl — who were led by PCC Art Instructor Mark Smith. Science student Olivia Crisp and Picciotto wrote the biographies for the eight scientists. Others from across the Sylvania Campus also helped bring the mural to fruition, including Facilities Management Services, the library, the Multicultural Center and the Women’s Resource Center.

Below are shortened versions of the scientists who are depicted in the mural:

Daly is known for her pioneering research in protein synthesis in the cells of the body, the influence of high levels of cholesterol in causing heart attacks, and the correlation between smoking and lung disease. She graduated with her doctorate in chemistry in 1947, not aware at the time that she had become the first African American woman to do so. Throughout her career, she advocated for students of color to be enrolled in medical schools and graduate science programs.

Ochoa is an accomplished astronaut, having flown on four missions as a mission specialist and flight engineer, logging a total of 900 hours in space. She earned NASA’s Outstanding Leadership Medal (1995) and Exceptional Service Medal (1997) in recognition of her accomplishments. In January 1990, Ochoa was selected for astronaut training, and on April 8, 1993, she launched into orbit for her first mission, becoming the first Hispanic female astronaut in space.

Begay is known for working on NASA’s high-energy gamma ray project and conducting research on nuclear fusion at Los Alamos National Laboratories. He served on numerous advisory committees for education in STEM, investigated cosmic gamma rays as a NASA-funded researcher, and held research fellowships at Stanford University and the University of Maryland. Along with his research, Begay studied how Navajo beliefs were connected to modern science and used his scientific background to assist the Navajo Nation in industry and education. He also was a co-founder of SACNAS, a society that works to advance Hispanics and Native Americans in the sciences.

Tharp shattered the scientific perception of the ocean floor as a muddy flat surface by compiling data to produce one of the first comprehensive maps showing exceptional detail including volcanoes, canyons, and extreme mountain ranges – a key discovery for the theory of plate tectonics. Tharp received numerous awards for her work and was one of the recipients of the National Geographic Society Hubbard Award in 1978. Though she was unrecognized for much of her career, Tharp will be remembered as a pioneer in ocean geology, her work paving the way for the advancement of plate tectonic theory. Today, at the Earth Institute at Columbia University, the Marie Tharp Fellowship is awarded to outstanding women in science.

Harris played a pivotal role in the research team who discovered element 104, rutherfordium, and element 105, dubnium. He is credited with particularly meticulous work during the discoveries of these two elements, which allowed other research institutions to successfully reproduce the research and cemented the discoveries. To say he faced obstacles as a black scientist may be somewhat of an understatement. “I could write a book about my job-hunting experiences,” he was later quoted as saying. In 1960, he accepted a position at the Lawrence Berkeley Laboratory, considered to be the most prestigious nuclear physics laboratory in the world, which led to his role as co-discoverer in adding elements 104 and 105 to the periodic table.

Molina was co-awarded the Nobel Prize in 1995 for playing a key role in the discovery that CFCs were causing depletion of the ozone layer. Molina was the first Mexican scientist to win a Nobel Prize, and he later donated $200,000 of his Nobel Prize winnings to support young scientists around the world performing research on the environment. He has served as an environmental adviser to presidents of both the United States and Mexico. On August 8, 2013, President Barack Obama awarded Molina the Presidential Medal of Freedom.

Alexander was to many a “household name” in the American space program. She was a project manager for the first successful landing of a space probe (the Rosetta) on a comet. Over the course of her career she worked at the United States Geological Survey studying plate tectonics, the Ames Research Center observing Jovian moons, and NASA’s Jet Propulsion Laboratory managing multiple missions. In addition to her scientific accomplishments, Alexander was an author of multiple children’s books and a vocal advocate for women and people of color in STEM fields.

Hsu is considered an expert in environmental issues and is a geologist, paleoclimatologist, and oceanographer. He has lectured or held honorary professorships internationally at leading universities such as Oxford, Cambridge, Harvard, Yale, Princeton and M.I.T. He was awarded the Wollaston Medal, previously presented to Charles Darwin and considered the ‘Nobel Prize’ of geology, from the Geological Society of London in 1984.

I think the mural looks great, nice artwork. So, at the risk of sounding cynical it’s interesting this was inspired after a diversity conference. I notice your depiction of diversity excludes white males. In fact the general message of “diversity” in the u.s now means “no white guys allowed” . Considering that, by current estimates less than 10℅ of the human population is European, whites and approximately half of that is male I can’t see why pushing aside white males is progress towards diversity. We’d be on the endangered species list of we were animals. Otherwise, good job toeing the line PCC

x by JBB 3 years ago

Reply to B.H,
I think the mural looks great, nice artwork. So, at the risk of sounding cynical it’s interesting this was inspired after a diversity conference. I notice your depiction of diversity excludes white males. In fact the general message of “diversity” in the u.s now means “no white guys allowed” . Considering that, by current estimates less than 10℅ of the human population is European, whites and approximately half of that is male I can’t see why pushing aside white males is progress towards diversity. We’d be on the endangered species list of we were animals. Otherwise, good job toeing the line PCC”
GOOD TO KNOW YOUR PRIVILEDGE ENABLED YOU TO COMPLAIN AGAINST THE ONE THING YOUVE EVER MISSED OUT ON IN YOUR LIFE BECAUSE OF YOUR (I ASSUME) CIS-WHITE-MALE STATUS.

I appreciate the reply JBB, although I’m not exactly sure what you were trying to say. I just couldn’t find a cohesive statement in your writing. I did pick up on the fact that you assume anybody who; 1. Identifies as the sexuality which they were genetically born 2. White ( I’m gonna guess you generalize whites as European) and 3. Is a Male. Is incapable of having an opinion or more precisely incapable of having an opinion that isn’t racist because those 3 things combined mean? And if I’m CIS gender white male how is that different from JUST being a white male? Does the fact that I am biological male that also identifies as a male mean something ? Just wondering, seriously. This probably isn’t the forum but, I’m amazed how often I hear those three things combined and how it’s synonymous with BAD. Isn’t that the opposite of the leftist message of tolerance, peace, unity , diversity, love , peace etc. I’m sure PCC will pull this but I am interested in the mindset that diversity will only be achieved once CIS,white,males are excluded.

x by Becky Olson 3 years ago

It’s a fact that today, women and people of color are overwhelmingly underrepresented in science careers (and have been historically). I think it’s great that this mural is raising awareness that science is for (and should continue to be) a field of interest & study for everyone.

Reply to both, B.H and JBB,
This is just a mural at a community college for crying out loud. You kids are community college students. Just enjoy the pretty colors and continue on with your day. Please stop whining about it, because it really does not affect you in any way possible (no matter your race, sex, or sexual orientation). It’s just a nice painting of some scientists, so get on with your life.

PS You should be studying for finals instead of complaining on a website, because your priorities will be reflected in your grades.

x by Justin Peek 3 years ago

I personally don’t understand why anyone has a problem with sis gendered anyone, I don’t care who people are attracted to, I don’t care who people get into sexual relationships with and I don’t give a damn about the color of peoples skin quit judging people, move on with your lives, and start doing something to help… Love you all. A concerned student.

I personally enjoyed reading all of the accomplishments of those scientists.

x by Jman 3 years ago

I think BH raises an important point, that diversity should include people who are white. But they are always excluded. If “whiteness” is a social construct that normalizes being white, then this is a good example of further normalizing having white skin as everything else is “diverse”. We need to be inclusive and not exclusive.

x by Ted Picciotto 2 years ago

“As the faculty member responsible for starting the project, I hear the concerns voiced in these comments with respect to inclusiveness. I think it’s great that everyone wants to feel included and connected. We, unfortunately, were not able to include examples of successful scientists for many race/gender combinations. The mural also lacks diversity in terms of sexual orientation or transgender individuals. The impetus behind the project was to “expand the view” of what a successful scientist looks like even if we were unable to include all race/genders/orientations.

As a white male, whenever I feel people are trying to exclude me, I always try to put myself in other people’s shoes. For example, say you are a student in the physical sciences, but you are not a white male, and notice a very narrow range of gender and race in the scientists discussed in class. Would the lack of diversity in the field be discouraging? As textbooks in the physical sciences tend to highlight the accomplishments of white males, we didn’t feel our students would struggle in finding white male role models.

This does not mean life cannot be full of barriers and struggles for white males or that we should not help everyone the best we can. It just means for this project, we assumed that our students would already had exposure to scientists of that particular background.

I hope this information helps you feel less excluded by this project. We care about all of our students and their perception of potential success. I appreciate you expressing your feelings and I would be happy to talk about it more in person.

It’s a great artwork as long as you see it optimistically.