This content was published: August 15, 2016. Phone numbers, email addresses, and other information may have changed.

Solar panels are becoming more and more part of the landscape, but unlike wind turbines or dams, their work is invisible to the naked eye – that is unless you use a nifty online monitor that measures the panels’ energy generation and demand.

Portland Community College’s Rock Creek Campus has such a monitor for its 500-kilowatt array, the largest ground-mounted array in the Portland metro area. Since 2012, the facility has been generating 60 percent of the energy needs for Building 9. The array is expected to produce nearly 10 million kilowatt hours during the next 20 years.

The monitor uses a simple bar graph to display the amount of energy generated by the array – as well as the energy consumed by Building 9 – on an hourly basis. With just a click of the computer mouse, you can see the data charted by the day, week, month or year going back to 2012.

The monitor makes it easy to see how on cloudy days, the demand for energy use outpaces the amount being generated by solar cells, while on sunny days, power generation more closely matches demand.

The site also regularly updates the amount of CO2 that the solar array has offset since installation. As of Aug. 5, the system had offset more than 3 million pounds of CO2, the equivalent of 1,514 mature trees.

As part of the bond measure approved by voters in 2008, state law required that PCC spend 1.5 percent of the value of the bond’s capital projects on solar energy initiatives. The college determined that the most cost-effective and efficient way to fulfill that requirement would be to build one large ground-mounted solar array instead of smaller roof-top arrays on several individual buildings.

After securing approval of the project from the Oregon Department of Energy, PCC solicited proposals from solar power companies and SolarCity was selected from among six.

SolarCity, based in San Mateo, Calif., built the 35,000-square-foot array from panels made by Hillsboro-based SolarWorld.  SolarCity owns and maintains the facility but leases the land it is on from PCC. The PCC Bond Program paid the firm a one-time fixed amount for electricity for the next 20 years, which will save the college up to $1.5 million over the long-term as energy prices continue to rise higher than the fixed rate. PCC will have the option to purchase the Rock Creek array after 20 years. 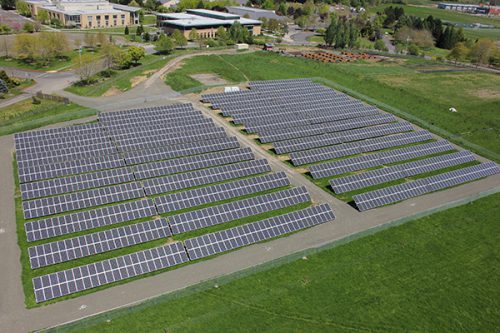 The financial package for the array included tax incentives and well as funding from the Energy Trust of Oregon.

Solar photovoltaic cells convert sunlight (photons) directly into electricity (voltage) at the atomic level. The first photovoltaic module was built by Bell Laboratories in 1954 when scientists discovered that silicon (an element found in sand) created an electric charge when exposed to sunlight. Soon solar cells were being used to power space satellites and smaller items like calculators and watches.

Since the first solar cells were invented, advances in technology and manufacturing have driven down their cost, and solar photovoltaics are now – after hydro and wind power – the third most important renewable energy source in terms of globally installed capacity.

x by Don Steinke 5 years ago

We need 1000 similar solar farms. I’d like them over parking lots to save habitat and provide shade.