This content was published: August 22, 2016. Phone numbers, email addresses, and other information may have changed.

Photos and Story by Becky Olson 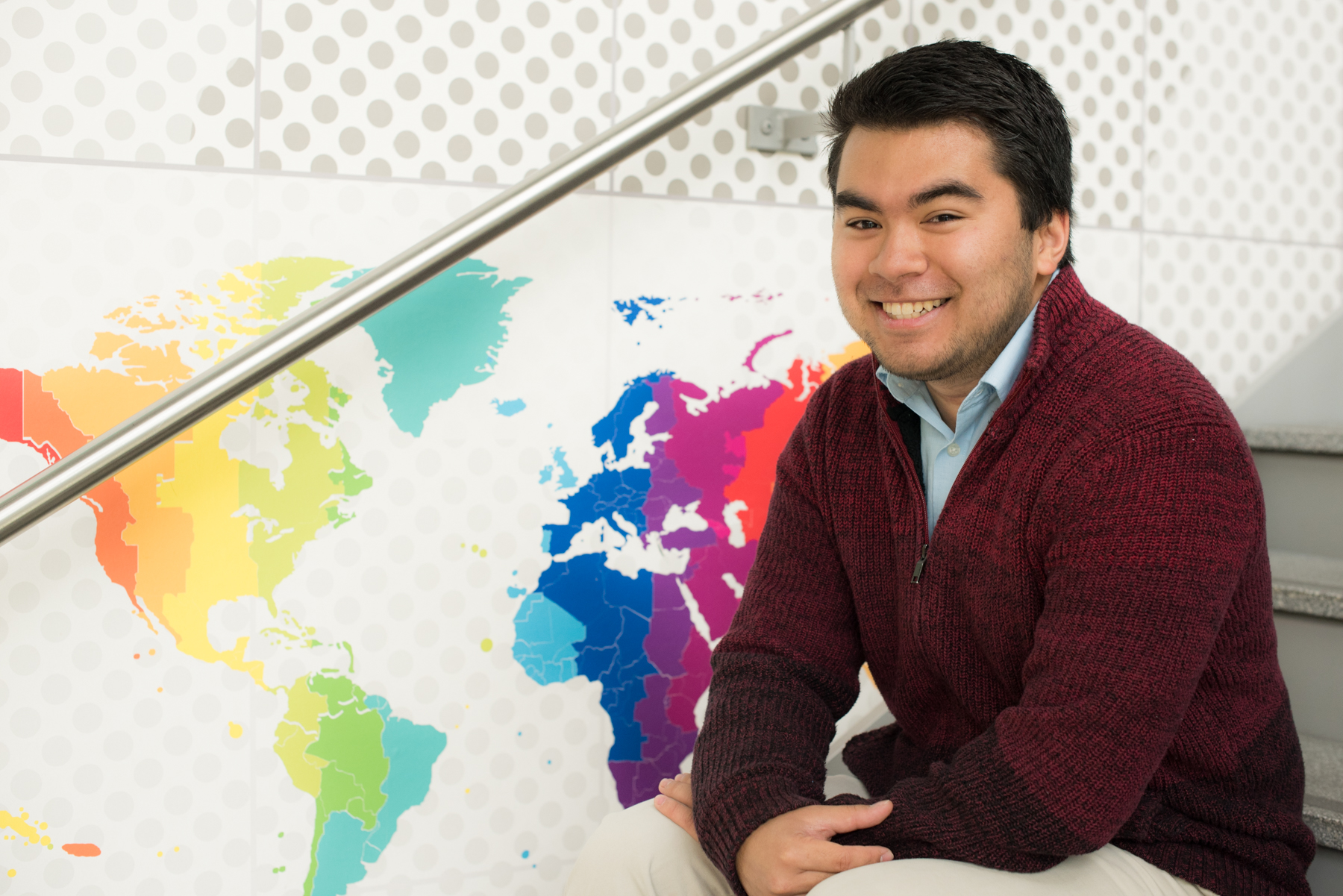 It took Ryley Ha’o-Magno a few months to get the courage to actually go inside the Queer Resource Center (QRC). He had seen the colorful decorations and free coffee sign on the door, and was curious about what it was all about–but was worried about what people would think of him. He waited for an afternoon when no one was around, practically sprinted inside.

“When the person at the desk said hello to me, I dropped my voice down really low. I didn’t want people to think I was gay, and I thought that would help for some reason,” he laughed. “It seems really ridiculous to me now.”

Faking the sound of his own voice is something that Ha’o-Magno doesn’t do anymore. Thanks to the support and affirming experiences he’s had at the Queer Resource Center, he’s a lot more accepting of himself.

For the last two years, Ha’o-Magno has served as a student advocate helping to empower and educate other students. His focus has been outreach and education, and he’s visited dozens of high schools in Washington County to speak to students about being queer, being an ally and being a PCC student.

“Many people don’t realize this, but PCC’s Rock Creek QRC is the only resource center of its kind in all of Washington County,” he explained. “Everyone in the community is welcome there—you don’t have to be a PCC student to get help.”

The Rock Creek QRC is the oldest and most established of PCC’s four queer resource centers.  Although each of the campus centers vary in their size and offerings, each has a dedicated physical space and plans to expand their programs in the coming year. 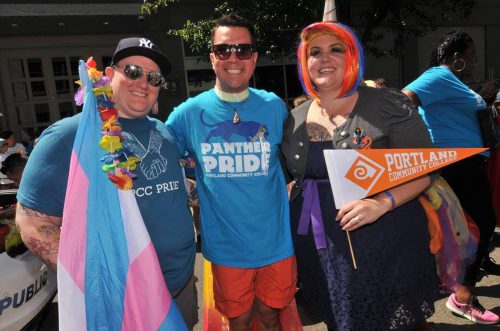 All of the queer resource centers welcome and support students of all gender expressions and identities. The centers host activities and events; offer students free coffee, tea and snacks; and connect students to campus and community resources in everything from tutoring to affordable sexual health care.

“Most of all, what we offer is a place where students can feel heard,” said Becky Springer, coordinator for the Rock Creek QRC. “This is a place to have community and to feel welcomed and embraced.”

One of the questions that the QRC’s get often is why they are called “queer” resource centers.

“Queer is an umbrella term that encompasses LGBTQQTIAP+ identities,” explained Springer. “Not everyone identifies as ‘queer’ within the community, but it’s a negative term has been reclaimed and transformed into something positive.”

The need for queer resources at PCC is great—and growing. According to a 2013 study by the Oregon Student Association, PCC has the most queer and trans-identified students of any college in the state with 14 percent of the student population self-identifying as lesbian, gay or bisexual, and 6 percent as transgender.

“Supporting trans, genderqueer and non-binary students is especially important given the recent legislation attempts at restricting people’s abilities to use a bathroom they identify with most,” said Springer. “It doesn’t matter if it’s a classroom or a bathroom—PCC students should feel safe wherever they are on campus.”

One of the ways the centers have worked to support trans students is by advocating for the addition of more gender-inclusive restrooms on campus, which can be used by students of all gender expressions and identities.

PCC plans to have 33 all-gender bathrooms at its locations by 2017, and is in the process of passing a bathroom policy allowing all members of the community to use campus spaces and facilities in accordance with their gender identity and/or expression.

Sylvania’s Queer Resource Center Coordinator Bobby Waldner started at PCC as a student in 2011. He came back to school at age 30, before there was a QRC on the Sylvania Campus, and his transition was tough to say the least.

“I was already feeling nervous being one of the oldest people in my math class,” he said. “You can imagine how I felt then when I heard one of my classmates calling me a faggot.”

Waldner’s experiences inspired him to seek out a place on campus where students could find support and community. He began volunteering at the Sylvania Women’s Resource Center, and thanks to the encouragement of its director, Jeannie LaFrance, Waldner started a student Q club. This club became the foundation for Sylvania’s Queer Resource Center, where Waldner now works on staff as a part-time resource specialist.

“I grew up in a small town where people were not very accepting or nice to me,” he said. “To grow from there to where I am now is incredible. Never in my life did I ever think I would be this person for other LGBT people.”

Among his many responsibilities at the QRC, Waldner was one of the key organizers who coordinated PCC’s participation in the Portland Pride Parade.

Nearly 200 PCC students, staff, faculty and supporters marched with PCC in the Portland Pride Parade this year, which was held a week after the tragic mass shooting at a gay nightclub in Orlando, Florida. The PCC contingency marched in bright turquoise Panther Pride T-shirts, carrying rainbow signs with messages of love and solidarity for the LGBTQ community.

For Waldner, the outpouring of support in the wake of a tragedy was bittersweet.

“It was the first time in a week that I cried happy tears,” said Waldner. “To see all of the love and support that came from our PCC community—it was overwhelming.”

x by Will 5 years ago

This is unnecessary, I find it ridiculous that we have to create spaces for individuals to feel safe, when they should be able to feel safe everywhere on campus. It is absolutely ridiculous to create a new space instead of focusing on making sure the public environment is open and welcoming to all. Whether or not there is an issue of actual prejudice being expressed against these kinds of groups or if it’s entities belonging to these groups who feel due to personal insecurities with their own identity, that they are not welcome and that resources are not available is a very important thing to note.

It is necessary. Yes the public environment should feel safe for all, but it doesn’t. That’s not how it works. Are we to take no action in creating our own spaces and just wait until it supposedly is safe? It is necessary to try to create some type of space that we can feel somewhat comfortable in. “The whole world should be a safe space. Creating safe spaces isn’t necessary.” Ok, let us know when the world becomes a safe space.

x by Ralf Youtz 5 years ago

Sadly, LGBTQ people still face prejudice, harrassment, and discrimination at PCC (and in the larger community). Our QRCs provide support to people who may not get it anywhere else.

Thank you to Ryley, Bobby, Jeannie, and EVERYONE involved in the heroic work of the PCC QRCs!!

x by Kyle 5 years ago

As a member of the LGBT community I personally find that the only resource center in the school is offensively named Queer Resource Center. In no place at no time in the history of LGBT civil rights movement have I seen anyone ever be okay with being called a Queer. But if it’s done by it’s own community it’s acceptable. I personally am offended by the entirety of the resource center as well as the school for allowing students to have it named as such. Regardless of the help you’re trying to bring, it is socially inappropriate to refer to a homosexual as queer. Just as it is offensive to call them a faggot. They are not descriptive words I have known anyone to be comfortable with when they are being referenced to. That’s why I will not, have not, and don’t ever plan on using, attending, or being associated with the resource center. It isn’t a welcoming comfortable place when it calls me a queer. As a human, I think someone needs to reconsider the naming of a place that’s suppose to be welcoming. As well as more student body actually associating with the resource. It’s always tucked into a corner where nobody can find it if you’re attending a campus for the first time, or if you go to SE campus, the center is NEVER open. This resource isn’t much of a resource at that point. Thanks.

x by Becky Olson 5 years ago

Thanks for your comment, Kyle. As the article explains, not everyone within the LGBTQQTIAP+ community identifies as “queer,” but this is a negative term that has been reclaimed and is preferred by many members of the community (including Rebecca, Bobby and Ryley who are interviewed in the article).

[…] was an emotional moment for Waldner, who is a co-founder of the QRC system at the college. In 2011, at the age of 30, the Michigan native began his educational journey at PCC. But in one […]