This content was published: July 11, 2016. Phone numbers, email addresses, and other information may have changed.

Foods and Nutrition Lab serves staff an opportunity to collaborate 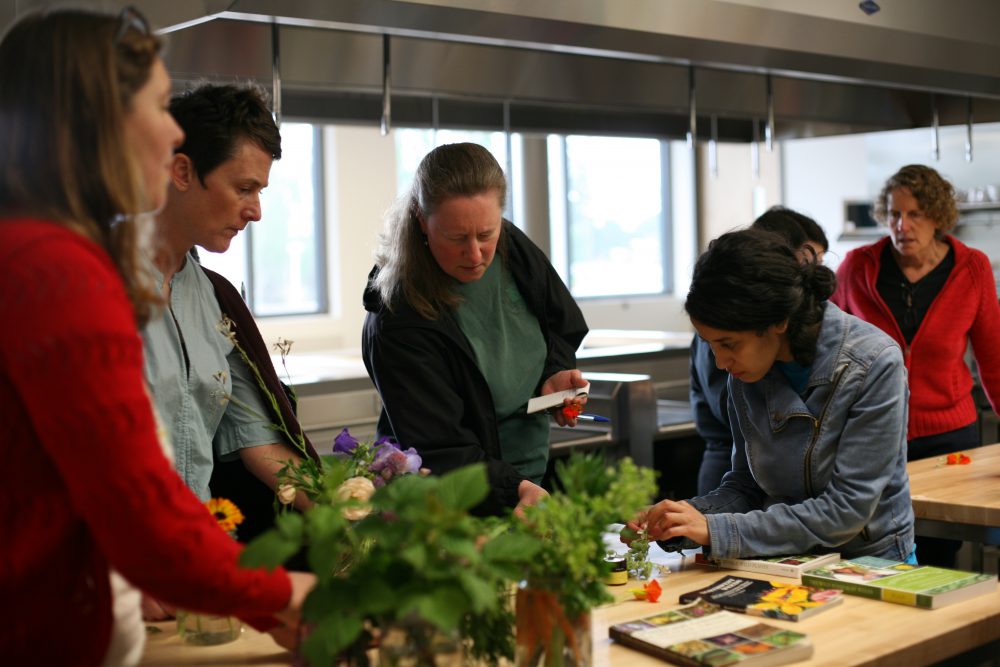 The dining commons in the new addition to Building 5 at the Rock Creek Campus has been bustling since it opened in March. But on one recent day, 14 faculty and staff members spent their lunch break one floor above the cafeteria in the Foods and Nutrition Lab, nibbling edible weeds and sipping home-brewed apple cider vinegar.

The lab, one of the features at Building 5 funded by the 2008 voter-approved bond measure, is a nearly 1,000-square-foot space outfitted with professional-grade kitchen equipment, plus a demonstration area with a large video monitor that displays a live-camera feed of the cooking and preparation.

On this day, the coordinators of the campus’ Sustainability and Learning Garden programs taught other PCC staffers how to preserve or prepare unusual foods, including edible flowers, weeds and parts of plants typically discarded, such as carrot tops and pumpkin seeds.

The hour-long class was part of a four-day workshop entitled “Celebrating Food: An Interdisciplinary Collaboration.” The program was organized by Alissa Leavitt and Michael Meagher, instructors with Rock Creek’s Health Studies Program, to highlight the interconnections between food, human physiology, human nutrition, social interactions, and a sustainable and resilient environment.

“A lot of instructors had expressed interest in using the lab to augment their lessons, and the workshop was a way to let them experience and practice using the space,” said Leavitt. “So we reached out to a few instructors and they came up with the topics and titles and we just said ‘go for it.’ ” 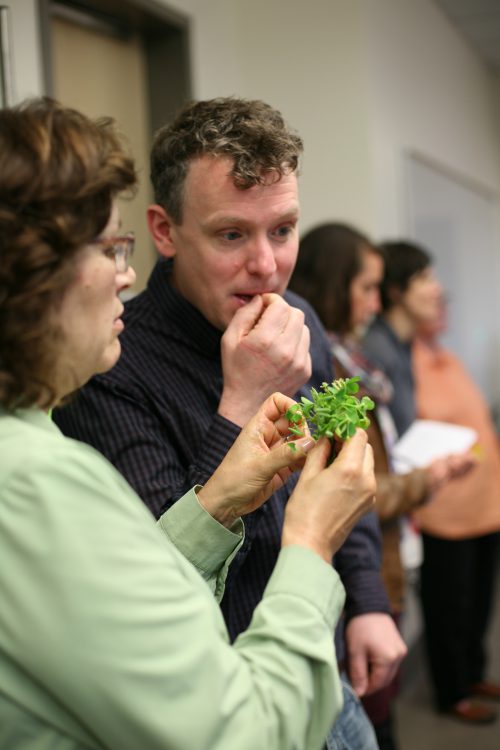 The Foods and Nutrition Lab has been intended from the start as a place for hands-on learning and a vehicle for interdepartmental collaboration. To that end, the other three sessions in the workshop taught by instructors were:

The workshop was also inspired by World of Health, a campus discussion group in which instructors and staff meet weekly to discuss an article and “talk about things people could do to make a difference for their life, their health and for the environment,” said Leavitt. They wanted to do something similar that utilized the lab.

Instructors were invited to facilitate a session, and then given the freedom to determine the focus of their topic.

“What we like to do is connect the experts together and build something and let it happen,” said Meagher. “It’s developing a sense of community, it’s empowering, it’s sharing a space and resources. It empowers instructors to talk a little outside their typical content area.”

Meagher, who is also department chair for Health Studies and the Foods and Nutrition programs, explained that because feedback was so positive, a similar workshop is likely to be offered next year. And while the original intent “was to foster a sense of community for faculty and staff,” they will consider opening future workshops to students and the community.

The Food and Nutrition Lab has been used for a variety of other purposes. PCC students studying viking history held a cooking class that was linked to the curriculum.  PCC’s Community Education Program has also held courses, such as one on artisanal baking.

The larger community has also benefited from the facility. Students from Beaverton’s Springville K-8 School used it to bake pizza from scratch using the vegetables they grew in the campus’ Learning Garden. And a culinary school has held demonstrations in the lab.

Meanwhile, a work group coordinated by Leavitt is studying potential career pathways that could be developed for a new certificate or degree, which would ultimately be the lab’s primary purpose.

“We’re really trying to keep the focus of that space as a lab not just a kitchen,” added Meagher. “It’s a place for people to learn and experiment, and take it to a higher academic level.