This content was published: June 20, 2016. Phone numbers, email addresses, and other information may have changed.

New graduates whoop it up at the 2016 PCC commencement ceremony 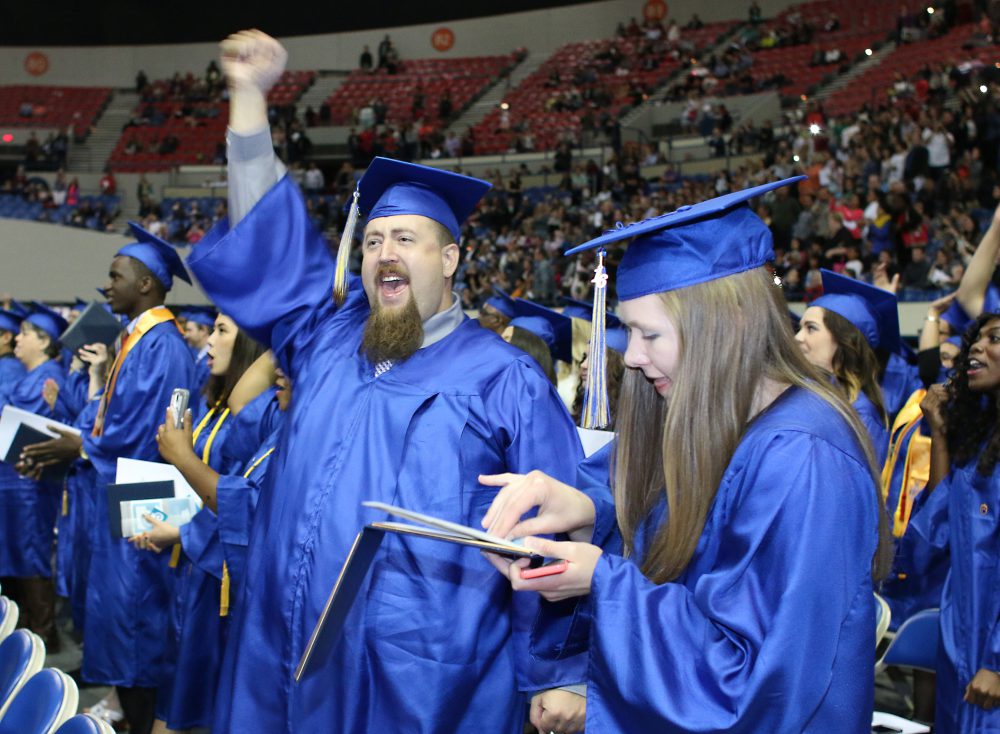 Oh, what a feeling!

On Friday, June 10, a blue sea of graduates converged on Portland’s “Glass Palace” with diplomas in hand and hopes on the minds. It was Portland Community College’s 54th commencement ceremony and more than 5,400 degrees, certificates and awards were handed out, and about 900 students walked in front of thousands of friends, family and community members.

The program was festive and celebratory. It featured Rock Creek President Sandra Fowler-Hill as master of ceremonies with PCC Board Chair Deanna Palm and PCC Interim President Sylvia Kelley providing remarks. An inspiring rendition of the national anthem was performed by graduating student Colleen Kelly. And, Blake Hausman, who teaches composition, literature and creative writing at the Southeast Campus, served as the faculty speaker, while Paula Heine got the crowd energized with her story as student speaker.

Below are photos from the night’s festivities in case you missed them all. Click on any picture to scroll through entire gallery!

x by Anthony Dejesus 6 years ago

How will we be able to access the photos that were taken at graduation? the professional ones with the diplomas?

x by James Hill 6 years ago

Anthony, you can email records@pcc.edu to check on that.

I am sad because there is no picture of me. I also wondering where can I find our professional pics so I can purchase them .

x by Steven Chennault 6 years ago

I also have been trying to find out how to order pictures. There has been no information given out about this.

x by michelle Turpin 6 years ago

I would like to get a copy of me receiving my degree. Where do I go ,who do I contact, who do I call, text, E-mail ???

x by michelle Turpin 6 years ago

x by Destiny Tolbert 6 years ago

I wish I had some pictures too! And where are our diplomas and certificates?

x by Ashli Harmon 6 years ago

Like the other post I would like to purchase professional pictures. PCC staff please give us an update or some information. It would be greatly appreciated.

x by Mandy Stutzman 6 years ago

I emailed records more than a week ago and I have received no answer. This is frustrating. I will be going to the campus later today. Hopefully I can find out something there. If I do I will pass the information on.

x by Mandy Stutzman 6 years ago

Ok Everyone, I got it!!! Go to google and type in lifetouch commencement photos 2016. Then you can find your name.

x by Sabrina Barrett 6 years ago

Click the link below to get to the site that has our graduation pictures. If you are looking for you own personal photos, then use the top drop down and find your name! :)

x by News: Ten stories from 2016 that got people talking and reading | PCC 5 years ago

Celebrating the Class of 2020, Picture This! The 57th Commencement, Top Story: Celebrating Completion