This content was published: November 20, 2015. Phone numbers, email addresses, and other information may have changed.

Harold Williams, Sr., one of PCC’s biggest basketball fans and champions of students, would have been thrilled. 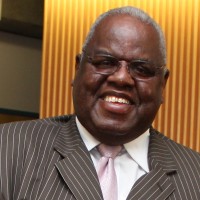 Portland Community College is honoring the late Williams on Wednesday, Dec. 2, when the basketball court at the Cascade Campus will be officially dedicated in his memory and named “Harold Williams, Sr. Court.” A brief dedication ceremony is set to take place at approximately 6:45 p.m. in the Cascade gym just before the tipoff of Panthers men’s basketball game. The women’s game gets under way at 5 p.m. All are welcome to attend the dedication ceremony.

Williams served on the PCC Board of Directors from 1991 until his death in 2012.

“As a community leader, champion of education, devoted fan of PCC basketball, and longtime member of the PCC Board of Directors, there is no better name to adorn the court at Cascade than that of Harold Williams,” said Karin Edwards, Cascade Campus president.

Williams had a long record of service to the community and extensive background in civil rights, affirmative action, education and justice. He served on many advisory committees and volunteered hundreds of hours of time to civic, religious and cultural activities. Williams was known for his promotion of alternative programs for at-risk students and was successful in expanding classroom space for mentorship programs for students of all ages. He routinely testified on bills of significance to community colleges and worked to partner community college services to poorer, underserved parts of the community.

Before his passing, Williams was instrumental in helping to turnaround the PCC basketball teams and in early 2012 even attended the announcement of new men’s coach Tony Broadous, who would go on to win the college a league title last year.

The Dec. 2 ceremony will feature remarks from Karin Edwards and current members of the PCC Board, as well as members of Williams’ family. A commemorative plaque, which will adorn the entrance to the court, will be unveiled.

x by Eddie Lincoln 4 years ago

Thank you PCC Community for honoring a man who spent his life fighting and winning many battles for PCC and his community.

Thanks to Harold William for being very instrumental in the success of the Margaret Carter Skill Center.

x by Michelle Scruggs 4 years ago

I didn’t know he pass away, he was one of my dad nephew. Very nice person, met him when I was a little girl over to my step moms house. every time I would see him he would say hey cuz how you doing. He wasn’t blood cousin, but he was a beautiful person. Rip in peace cousin.Luv

Mr. Harold Williams was and advocate for the North/North East Community. He was vigilant for the cause of justice and human rights for every ethnic group. He was my friend and colleague. His daughter Natosha is my God daughter. Mr. Williams has left a ‘vacuum’ in the local community. We need others to “step up to the plate” and continue what Mr. Williams worked on for many years. He was a large, beautiful spirit
and he is dearly missed. See you when I get to Heaven my friend.