This content was published: October 29, 2015. Phone numbers, email addresses, and other information may have changed.

Portland Community College’s Theatre Arts Program is presenting the North American premiere of a favorite son. “Usagi Yojimbo” by Stan Sakai and adapted for the stage by Stewart Melton will open Friday, Nov. 6 in the Sylvania Campus Performing Arts Theater for a six-day run. The 90-minute epic play runs from Nov. 6-15, and is appropriate for ages seven and older. 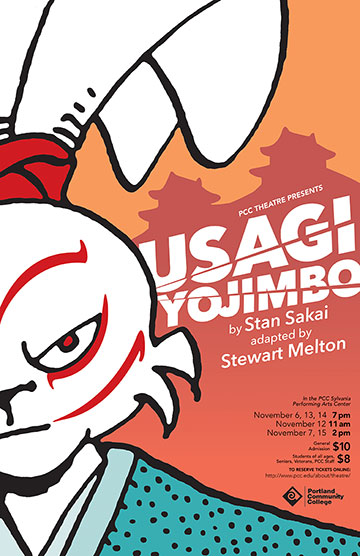 Set in rural 16th century Japan, where danger lurks everywhere and feudal lords fight for power, Usagi Miyomoto is a hero-worshiping rabbit who yearns to become a Samurai.  Created by Sakai in 1984, “Usagi Yojimbo” is featured in a comic book series now published by Milwaukie, Oregon-based Dark Horse Comics.

The play follows Usagi, a young rabbit who must leave his mother Atsuko and abandon his friends in pursuit of one ambition: to become a great Samurai warrior. Trained by a maverick sensei  – the master swordsman Katsuichi – an aging lion and teacher of the warrior’s code known as Bushido – Usagi learns that the way of the samurai is one of peace and perfection – not just masterful swordsmanship. But as war engulfs the land, he must make a choice that will test his loyalty, honor, and his dearest friends Mariko and Kenichi.

Audience members are invited to visit author and artist Sakai on opening night, Friday Nov. 6.  A Japanese American National Museum Cultural Ambassador Award winner, Sakai will sign copies of his comics and other books. “Usagi Yojimbo,” which is celebrating its 30th anniversary, has been featured in the “Teenage Mutant Ninja Turtles” and won numerous accolades, including three Eisner Awards and the Parents’ Choice Award.

Tickets are $10 general admission and $8 for students, seniors and veterans. Tickets can be purchased online, at the PCC box office one hour before curtain time, and in the Sylvania Bookstore.

x by PatrickR 7 years ago

Stan Sakai,the creator of Usagi Yojimbo,is a fantastic storyteller and I urge anyone and everyone to check out this play. Stan has a wide following throughout the world and his stories are enjoyed by fans of all ages.

x by Mackensie 7 years ago

I went and saw the 2pm showing on Nov 7. It was an entertaining wuxia hero’s journey tale, from silly, immature boy to a balanced young man. My seatmate said it reminded them of Kung Fu Panda.

Each actor’s particular strength seemed to be considered in casting. I went in worried it would be like a corny 1970s kung fu movie, but left thinking I’d be interested in seeing future PCC productions. :)