This content was published: October 15, 2015. Phone numbers, email addresses, and other information may have changed. 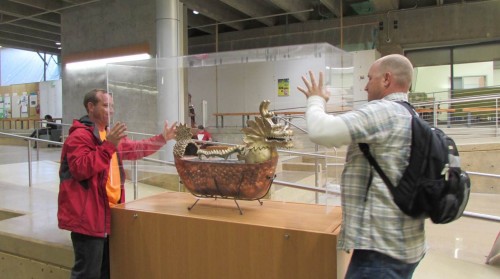 The Sylvania Campus Traditions, Rituals and Fun Committee decided to use a dragon boat shape as the vessel, to place 50 items inside the capsule, and to designate that it should be opened 50 years later, in 2062.

A time capsule that was created as part of PCC’s 50th anniversary celebration in 2012 is now on permanent display in the College Center. Though officially sealed in a ceremony by Buddhist monks, this is the first time the contents of the capsule have been inventoried, described, catalogued and wrapped in protective archival materials.

The idea to create a time capsule for the college’s 50th anniversary developed during planning for the campus’ 2011 in-service. The Sylvania Campus Traditions, Rituals and Fun Committee decided to use a dragon boat shape as the vessel, to place 50 items inside the capsule, and to designate that it should be opened 50 years later, in 2062.

The reason the time capsule is in the shape of a dragon boat is that PCC has a dragon boat team that competes each year. Dragon boating in Portland began in 1989 with the gift of six Taiwan-style boats from Portland’s sister city Kaohsiung. Thus began the annual tradition of the Portland Rose Festival Dragon Boat Race, hosted by the Portland-Kaohsiung Sister City Association, on the Willamette River. The races are held in early June as a sanctioned event of the Portland Rose Festival Foundation. Portland’s Rose Festival Dragon Boat Race is considered North America’s largest Taiwanese-style boat racing event.

The PCC team, called the Zen Dragons, was started in 1989 as a PCC staff development project and as a form of outreach to the Asian community. It was coached by Fran Palk from Sylvania’s Student Success Center, and co-managed by Lenny Kesterson, PCC Computer Specialist. Palk, an ardent paddler for more than 30 years, coached the team until her retirement in 2012. Lenny also retired in 2012. The team operated as a college-wide student club based at Sylvania through 2014 before disbanding.

David Happ, a member of the TRF Committee, said the dragon boat is a perfect vessel, because it is “symbolic of students’ ability to work together as a team and is representative of the international students who attend PCC.”