This content was published: August 17, 2015. Phone numbers, email addresses, and other information may have changed.

The challenge was to beat 32 other diesel students from across the country who would face 14 different technical repair challenges, each 30 minutes long, for the chance to work for one of the most respected employers in the world. Walker, who is a graduate of PCC’s ThinkBIG Program (a partnership between the college and regional Caterpillar dealers), won the national SkillsUSA championship in diesel technology and as a result reported for work a month later in Pasco, Wash., as a full-time employee of Western States Equipment Company, which is a certified Caterpillar dealer. 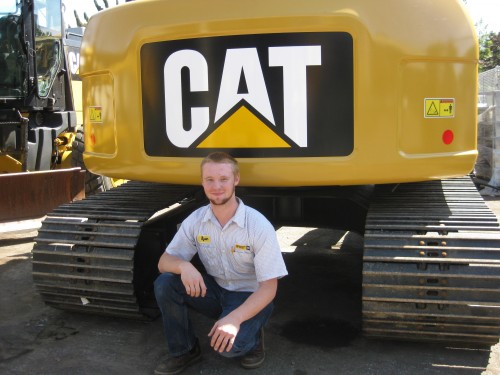 Ryan Walker had to leave his community in Washington state and travel hundreds of miles to Portland in order to earn his degree from PCC. Today, his commute is enviable. The distance between Kennewick and the Caterpillar dealership in Pasco is four miles.

Walker’s Caterpillar challenge started with the state level competition in April. At Camp Withycombe in Troutdale, he joined other diesel technology students in an all-day, nine station competition. Walker won and claimed the Snap-On-Tools bundle (worth $300) as a prize. Two months later, he found himself in Kentucky with 6,000 competitors from across the country. In his category, diesel service, he faced 32 challengers in another all-day competition involving 14 different timed events. At each SkillsUSA station, he had 30 minutes to correctly diagnose a system failure and repair it.

“I was confident but I was also up against a lot of very talented guys,” Walker said. “I was hoping to finish in the top 10. I actually don’t remember much about being on stage. I was so surprised, I was a little oblivious.”

The prize that June day was $5,000 in tools donated by different event sponsors. But working for the best always comes with ups and downs.

“What I like best about ThinkBIG is they don’t hesitate to do whatever it takes to get with the students to make things clear and understandable,” Walker added. “It’s in their best interest to train us because we will be working at their dealerships. The hardest thing about the program is being away from home.”

Students in the ThinkBIG Program at the Rock Creek Campus attend classes for eight weeks and then work for three months as a paid intern at a Caterpillar Dealership. The program takes two years to complete.

“Ryan Walker is the type of student instructors can only hope to have in a classroom,” said Ish Rivas, a Caterpillar dealer service technician. “He is smart, driven, and hungry to learn all that he can about heavy equipment and the diesel industry. The ThinkBIG Program is designed to start with the best students available and equip them with the tools and skills they will need to excel in their future careers.

“Ryan took full advantage of this opportunity and applied himself at school and during his internship at a Caterpillar Dealer,” he added. “There are three main parts that need to fall in to place in order for this program to work: the school, the dealer internship, and most importantly the student with the will to better themselves and push for excellence.”

Prior to enrolling in Caterpillar’s ThinkBIG Program at Rock Creek in September 2013, Walker graduated from Southridge High School and from Tri-Tech Skills Center, both in Kennewick, Wash. He had to leave his community in Washington state and travel hundreds of miles to Portland in order to earn his degree from PCC. Today, his home to work commute is enviable. The distance between Kennewick and the Caterpillar dealership in Pasco is four miles.

In 2005, PCC became the first college in the Pacific Northwest to partner with Caterpillar Inc. which runs the ThinkBIG Program for the international heavy-equipment manufacturer. The partnership trains students from Oregon, Washington, Alaska, Montana and Idaho as Caterpillar technicians at PCC’s Rock Creek Campus.

While participating in the program, students work in internships at participating Caterpillar dealerships and earn an associate degree in applied science. ThinkBIG compresses into two years what typically requires six to seven years of on-the-job experience. With the addition of PCC, the Caterpillar ThinkBIG network now consists of 10 colleges all in the United States, plus China, the Republic of Panama, Peru, Chile, Mexico, England, Canada and South Africa.