This content was published: August 20, 2015. Phone numbers, email addresses, and other information may have changed. 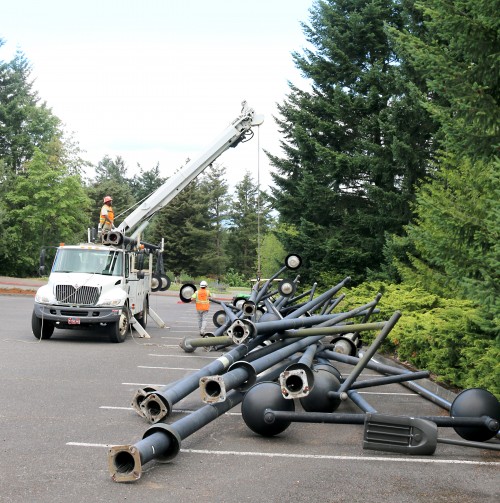 It was a light pole graveyard earlier this summer after Howard S. Wright workers removed old light poles in several Sylvania parking lots. They are being replaced by energy-efficient LED models.

Whether it’s pizza boxes, water bottles or batteries, recycling is second nature to most Portland residents. But what about a giant pile of aged light poles?

As part of the campus improvements funded by the 2008 voter-approved bond measure, PCC Sylvania’s construction manager/general contractor, Howard S. Wright Construction, earlier this summer removed 50 light poles in lots 9 through 14, and on G Street from Lesser Road to K Street. They are being replaced with new aluminum poles fitted with energy-efficient LED lamps.

But most of the old steel fixtures are 46 years old and a high-pressure sodium type, which have no value in today’s market. So a metal recycling facility will haul away the poles, carefully dismantle them to protect against the release of the mercury inside the lamps, and recycle the metal parts.

Installation of the new light poles in parking lots 9 through 14 will be completed by fall term 2015. The old poles in lots 1 through 8 will be replaced over the next two summers.