This content was published: May 14, 2015. Phone numbers, email addresses, and other information may have changed. 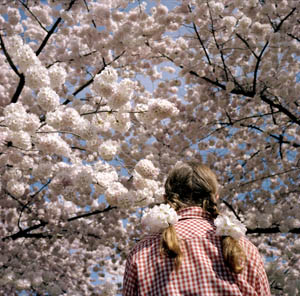 With the changing of the seasons, “Sakura Sakura” shows how these blossoming gifts from Japan bring Portland’s Tom McCall Waterfront Park alive each year.

Motoya Nakamura, Newberg Center faculty, is a featured artist on display at the Oregon Nikkei Legacy Center, from March 7 through June 14, (121 NW 2nd Ave.). Over the course of a year, Motoya trained his camera lens on the sakura (cherry blossom) trees that frame the Oregon Nikkei Endowment’s Japanese American Historical Plaza and Bill of Rights Memorial along the Willamette River in downtown Portland.

With the changing of the seasons, “Sakura Sakura” shows how these blossoming gifts from Japan bring Portland’s Tom McCall Waterfront Park alive each year.

An award-winning photographer, including the Pulitzer Prize for Public Service, Motoya’s work has been shown in numerous art exhibitions. The Oregon Nikkei exhibition and its public programs are made possible in part through a grant from the Oregon Heritage Commission.

The Newberg Center’s 16-acre location near Highway 99W opened for classes in 2011. It offers a variety of credit and non-credit courses, including art, social science, math, science, developmental reading, writing and math, computers, ESOL and business.