This content was published: May 15, 2015. Phone numbers, email addresses, and other information may have changed. 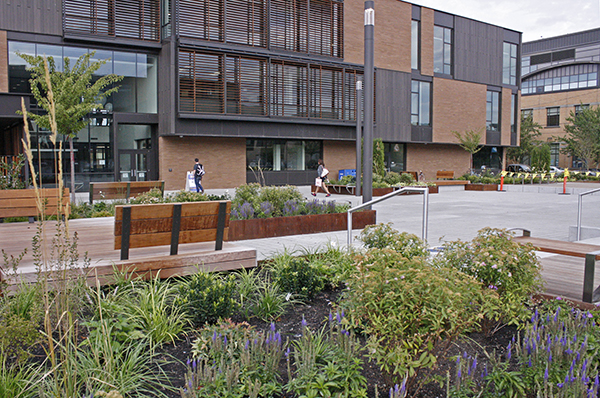 Cascade Hall is home to 14 general purpose classrooms as well as the Center for Careers in Education, the Portland Teachers Program and a childcare center.

The Daily Business Journal (DJC) announced yesterday that Cascade Hall, the new academic building at Cascade Campus, has won second place in the public buildings category of the 2015 TopProjects competition. Cascade Hall is one of two new buildings on the campus constructed with funds from the 2008 voter-approved bond measure.

DJC TopProjects  honors the best building and construction projects in Oregon and Southwest Washington and is the premier awards program of its kind for the region. This year was the competition’s 20th year.

Cascade Hall is a three-story, 40,000-square-foot building that houses 14 general purpose classrooms, plus the Center for Careers in Education, the Portland Teachers Program and a daycare center.

It was designed by THA Architecture and constructed by Hoffman Construction  in partnership with Pacificmark Construction, a state-certified minority-owned business.

In a statement announcing the award, DJC noted that the “exterior of the academic center is broken up in sections of masonry, wood paneling and windows to give a human scale to the building while allowing it to blend in with the surrounding neighborhood homes.”

Cascade Hall and the other new building, the Student Union, sit on opposite sides of a broad plaza. This phase of bond-funded improvements also included a 211-stall underground parking facility beneath the plaza, which optimized space and left room for future expansion of the campus.

DJC also praised the project as “a model for how minority- and women-owned firms and emerging small businesses (MWESB) can be incorporated into building industry projects.”

“The project hits other diversity highpoints,” said DJC. “Two satellite parking facilities were built entirely by minority workers and firms, and a remodel of an existing classroom was accomplished in a challenging three-month window by a team made up of 75 percent MWESB firms.”

Both Cascade Hall and Student Union have pending applications for LEED Gold certification. LEED stands for Leadership in Energy and Environmental Design, and is a voluntary, consensus-based rating system for evaluating the environmental performance of building and community design, construction, operations and maintenance.

Read more about these two new buildings on the bond website.